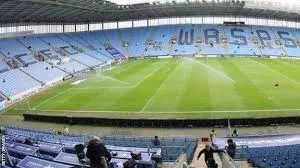 According to media reports, the new owners of the Coventry Building Society (CBS) Arena have issued an eviction notice to Coventry City. Mike Ashley, the former owner of Newcastle United, took over the stadium two weeks ago when the previous owners went into administration last month. Coventry was briefly considering alternative stadiums at the time but was assured that they could continue to play at the CBS Arena.

When local investor Doug King completed the purchase of a controlling stake in the club, the team declared its intention to bid on the CBS Arena.


Simon Gilbert of BBC CWS announced on the radio this morning (Monday) that the stadium had got new owners a few weeks ago.

After nearly two decades, he believed many people would have hoped that it would end the off-field turmoil between the stadium and football club.

He went on to say that such illusions had been broken in a matter of weeks. It was learned that the new owners of the Coventry Building Society Arena placed an eviction notice on Coventry City Football Club on Friday afternoon.