New Delhi: Indian and China on Saturday announced the setting up of a new high-level  dialogue mechanism on economic and trade issues, even as Prime Minister Narendra Modi talked of a balance between goods and investment after Chinese President Xi Jinping called for finalising the Regional Comprehensive Economic Partnership (RCEP).

President Xi also briefed India about Pakistan Prime Minister Imran Khan’s recent visit to Beijing. However, the Kashmir question was neither raised nor discussed by either side, according to a senior Indian government official.

The venue for Saturday’s formal interactions was Fisherman’s Cove on Kovalam beach.

After a one-on-one meeting which went on for 50 minutes, they began delegation level talks with opening remarks by both leaders.

In line with precedence set by the first summit, there was no joint statement – but both sides issued separate press releases.

Speaking to the media, Indian foreign secretary Vijay Gokhale said that there was a “good discussion” on trade. “President Xi Jinping said that China was ready to take sincere action”.

He announced that the leaders have agreed on a new High Level Economic and Trade mechanism, which will be chaired by Chinese Vice Premier Hu Chunhua and Union finance minister Nirmala Sitharaman. “The decision on its activation will be taken through diplomatic channels,” added Gokhale.

The Indian press note, issued after the end of informal summit, stated that the objective of the mechanism would be to achieve “enhanced trade and commercial relations, as well as to better balance the trade between the two countries”. The second aim would be to increase investments in selected sectors “through the development of a manufacturing partnership”.

The Chinese readout, provided via the report of its state-run news agency Xinhua, focused on six points it said Xi had made:

Second, that there be “timely and effective strategic communication” which would “prudently deal with issues concerning each other’s core interests, and for problems that cannot be resolved at the moment, they should properly manage and control them.”

Third, that the two sides “effectively improve military and security exchanges and cooperation”.

Fourth, that China and India “deepen pragmatic cooperation and tighten ties of interests”, taking “the establishment of a high-level economic and trade dialogue mechanism as an opportunity to strengthen the alignment of their economic development strategies, and seek to build a partnership in manufacturing industry”. Xi also invited Indian pharma and IT companies to invest in China.

Fifth, they should “consolidate the foundation of friendship” by deepening cultural and people-to-people exchanges.

Sixth, that they strengthen cooperation in international and regional affairs, in particular by taking “a clear-cut position to safeguard an international system with the United Nations as its core and an international order based on international law” and upholding multilateralism, especially in trade, “with the World Trade Organization as its core” and concluding the RCEP agreement “as early as possible”.

India’s trade deficit with China has been thorn in New Delhi’s side for more than 15 years. Last year, the deficit was around $53 billion, while total bilateral trade stood at $95 billion.

Gokhale said China brought up the issue of finalising RCEP during the talks. “Prime Minister Modi said that he looked forward to this, but believed that there should be a balance between trading goods and services”. Xi replied, as per the Indian foreign secretary, by noting that “Indian concerns” should be addressed.

The MEA press release stated that the two sides “agreed on the importance of concluding negotiations for a mutually-beneficial and balanced Regional Comprehensive Economic Partnership”.

Also read: How Consultative Has India’s RCEP Strategy Really Been?

The Indian foreign secretary said that both India and China also supported the rule of law in trading regimes and back the World Trade Organisation mechanism.

The Chinese President also called to “step up engagement in defence and security”. Defence minister Rajnath Singh has been invited to visit China soon.

Both leaders agreed that peace and tranquillity had been maintained at the border over the last year since the Wuhan summit, when they had given “strategic guidance” to the two militaries, as per the Indian official.

Further, there was a decision that additional confidence building measures should be negotiated, but the announcement would take place later. 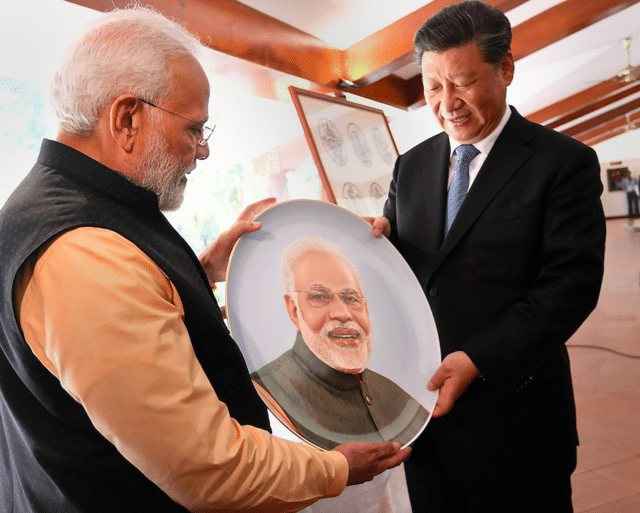 On the border dispute, the two leaders urged the Special Representatives to “continue their efforts to arrive at a mutually-agreed framework for a fair, reasonable and mutually acceptable settlement based on Political Parameters and Guiding Principles that were agreed by the two sides in 2005”.

In his opening remarks at the start of the formal discussions, Modi said that the first informal summit at Wuhan in April 2018 had given “increased stability” and “fresh momentum” to ties. “Strategic communication between two sides has improved”.

The Wuhan summit had been held in the post-Doklam period, after India and China emerged from a bruising 73-day long stand-off on the Himalayan heights of Bhutan in 2017. One of the key takeaways from the summit was “strategic guidance” given to the militaries to increase communication and cooperation at the border areas.

“We had decided that we will prudently manage our differences and not allow it to turn into dispute, be sensitive of each other’s concerns and be a pillar for peace and stability in the world,” he said.

Modi said that there had been exchanges with his guest on both bilateral and international issues. “Wuhan spirit infused new momentum and trust in our relations. Today’s Chennai Connect will begin a new era of cooperation in the country”.

In the run-up to the informal summit, Indian officials had said that Modi will not raise the issue of Kashmir on his own, but could clarify Indian position if Xi sought a clarification.

“I want to state quite categorically that Kashmir was not raised or discussed,” said Gokhale on Saturday.

However, he added that President Xi did mention the visit of the Pakistan Prime Minister to China earlier this week. “Prime Minister listened,” Gokhale said, but added no further details.

On the first day of the informal summit, India had said that there had been a consensus between the two sides on the issue of radicalisation and the need to find it together.

This topic also figured in India’s press statement, which stated that both leaders felt that terrorism “continues to pose a common threat”.

“As countries that are large and diverse, they recognised the importance of continuing to make joint efforts to ensure that the international community strengthens the framework against training, financing and supporting terrorist groups throughout the world and on a non-discriminatory basis,” said the MEA press release.

There was also a discussion on regional issues, including on Afghanistan.

The only reference to terrorism in Xinhua’s report was where it quoted Modi as saying “India is willing to join hands with China to push for an RCEP agreement at an early date, and boost connectivity and anti-terror cooperation.”

Next year, the two Asian neighbours will mark 70 years of diplomatic relations. A calendar of 70 events have been drawn up, which could include a ship voyage that will trace the historical connect between the two civilisations.

Gokhale noted holding at least one event every week over the next year should intensify people-to-people contacts and help to improve public opinion and perception in the two countries. “There was felt a need to broad base the relationship by improving public opinion,” said Gokhale.

The host states of Tamil Nadu and Fujian province in China will establish sister-state relations and explore the possibility of setting up an academy to study links between Mamallapuram and Chinese cities.

After the ends of talks which lasted around eight hours, Xi left Chennai for Kathmandu. He is travelling to Nepal for the first official visit by a Chinese President in 23 years.