After a frustrating 2-2 draw with Tottenham Hotspur last week, Manchester City were looking to bounce back instantly with a trip to Bournemouth. As for the Cherries, they entered the game on the same amount of points (4) as the champions, having beaten Aston Villa last week.

Pep Guardiola’s men came out all guns blazing, looking to overload Bournemouth’s box with as many bodies as possible. Their pressure soon paid off, as Sergio Agüero opened the scoring in the 34th minute. The lead was soon doubled as David Silva put through Raheem Sterling to poke past Aaron Ramsdale. Despite not really being in the game, the Cherries were able to get on the scoresheet through a Harry Wilson freekick just before half time. However, Agüero would extend City’s lead again in the 64th minute and seal all three points for the Champions. 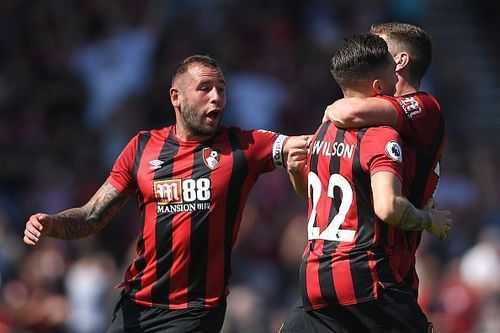 7 of Bournemouth's shots were on target

Whether it is an opinion or a fact, Eddie Howe doesn’t get enough credit for the work he’s done at Bournemouth. Lest we forget, the Englishman took over the club when they were in League One and has led them all the way to the mid-table of the Premier League. Now the fans are looking to see if the Cherries can reach the next level in perhaps a push for a Europa League berth. Four points from two games was a good start but the visit of the champions proved to be one step too far. Howe’s men were dominated in the first half with City firmly in control.

It was at the turn of the second half where we saw the best of Bournemouth. They swarmed Guardiola’s men in packs of three, not giving them any space on the ball. But it wasn’t just headless pressing, it was coordinated and designed to eradicate the flaws of the first half showing.

In those ten minutes after the break, the Cherries were in control and should have levelled the game. The pressure from the Cherries was so high that Guardiola had to change personnel in midfield. Although they lost 3-1, Bournemouth produced 10 shots, won 14 aerials and completed 173 passes against the champions of England. 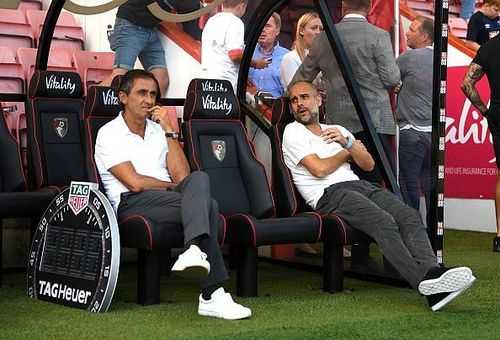 Pep Guardiola was not with VAR's decision

In past seasons, we’ve been left complaining and ruing the decisions of referees. Now, we’re pretty much doing the same, but in video form. Video Assistant Refereeing aka VAR has become the buzzword of the season. At the Vitality Stadium, VAR can be blamed for having gotten two major decisions wrong.

Early in the game at the 10-minute mark, Kyle Walker was yellow carded for another challenge on Nathan Ake. Upon replay, it could be seen that Walker stamped on Ake with his studs up. By the law of the game, that should have been a red card. However, VAR didn’t deem it a 'clear and obvious error' by the referee to overturn the decision. City having to play 80 minutes with 10 men could have made for a very different game.

Later, in the second half, it was Man City who was wronged by VAR as David Silva was stamped on by Jefferson Lerna in the penalty box. The referee didn’t deem it a foul though, despite the replays showing a clear foul on David Silva. VAR once again failed to intervene, leaving us all to wonder what a clear and obvious error is. 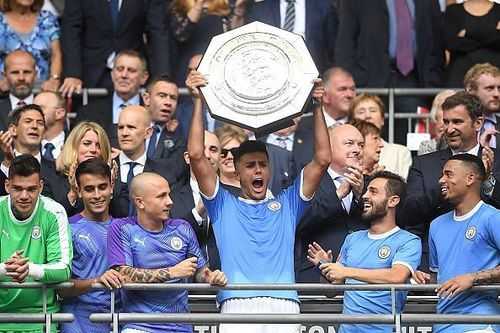 Will Fernandinho be able to get back into the starting XI?

Many believed that the Spaniard would be brought in just to be back up/competition for Fernandinho. Instead, Rodri has become a central figure to Pep’s plans this season, making three appearances with two being starts. As we mentioned earlier, Bournemouth had a 10-minute period where they were all over the champions, with City struggling to control the game. Pep responded instantly, by bringing on Rodri for Ilkay Gundogan in the 58th minute. Within minutes of the substitution, City had regained control of the game.

Rodri’s calming presence at the base of City’s midfield slowed the game down and took the sting out of Bournemouth’s attack. Once they regained control, the Sky Blues scored six minutes later. In his 32 minutes on the pitch, the 23-year-old impressively completed 94% of his passes and won 100% of his aerial duels. With this cameo, the holding midfielder reaffirmed his importance to Pep’s style of play. 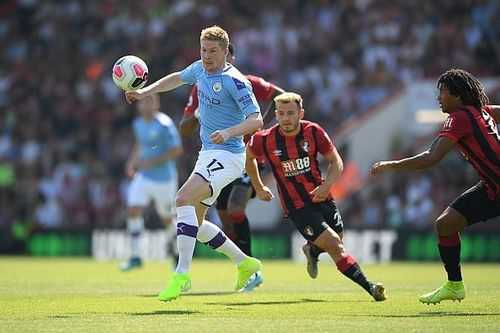 Last season, the Belgian was out of action for a combined total of 156 days, equating to him missing 28 games. This season, he’s back and firing at his best. In the 15th minute, Kevin De Bruyne notched up his fourth assist of the season, as he teed up Sergio Agüero for the game’s opener. The 28-year-old looks set to replicate his form from the 2017/18 season.

In producing his fourth assist of the season, De Bruyne set a Premier League record, becoming the fastest player to reach 50 assists in the league. It took the Belgian 123 PL games to reach 50 assists, beating the previous record held by Mesut Özil at 141 games. This achievement truly shows that much like his teammate David Silva, he should be considered as one of the best the English top flight has ever seen. Some players not only define a team but an era. David Silva’s name will forever be synonymous with Manchester City’s rise to the top of English football. The Spaniard was signed by Roberto Mancini back in 2010, 400 appearances later he’s still the driving force behind his club’s success. Today, the 33-year-old was as unplayable as he was on his debut. At the Vitality Stadium, the 33-year-old completed 53 passes, 3 dribbles and provided 2 assists in a man of the match performance.

What goes most unnoticed about the Spaniard is his leadership qualities. Lest we forget, the old guard of Yaya Toure, Vincent Kompany are gone, leaving only him and Agüero to lead the next generation of City superstars. This is the last season we’ll see the magician in England, let’s enjoy it while we can.