Cheesemaker behind Cathedral City fined £1.5m for killing fish and stinking out homes

A 'bullying' cheesemaker which helps produce Cathedral City has been hit with a whopping fine after discharging waste into a river over a number of years brought misery to locals.

The creamery's actions lead to the death of hundreds of fish and left furious residents with a lingering foul odour in their homes.

The stench was so bad residents suffered headaches and couldn't use their gardens, Cornwall Live reports.

The company that owns Davidstow Creamery, Dairy Crest Ltd - now known as Saputo Dairy UK - have been fined £1.5m after dumping the waste in River Inny. They were found responsible for discharges over several years from 2016.

The company was sentenced at Truro Crown Court after entering guilty pleas to 21 charges relating to pollution and odour incidents and permit breaches at Davidstow Creamery.

Eleven of the charges admitted by the firm are to do with the company breaching environmental permits with waste discharges into the River Inny.

Further offences relate to the contravention of permits on odour, and another for the company waiting more than a month to inform the Environment Agency about breaches in discharge. Thousands of trout died as a result of events at Davidstow Creamery.

Another charge stated that the company allowed discharges that caused water to be poisonous or harmful to fish. Canadian-owned Dairy Crest has since said it has carried out significant work to rectify the issues subject of the case.

At the sentencing hearing, Judge Simon Carr described the size of the company, saying that it is the largest dairy processing facility in the country and one of the largest in Europe. He added that the creamery operates around the clock and employs 195 employees. Dairy Crest Ltd’s profit was given as £21 million a year after tax. Judge Carr then went on to highlight the failings of the company, saying it failed to adhere to effluent limits and permits after opting to expand its facilities.

Judge Carr highlighted problems at middle and senior management level and a bullying culture, before saying permits were not adhered to over five years.

He then went on to address that, despite management being aware of the ongoing issues, the decision was taken not to close the site for remedial work to take place.

Moving on to the odour, Judge Carr said: “It’s obvious the issue over many years blighted the lives of people living nearby. I have read a number of moving statements and people were literally unable to leave their houses. This was a large organisation breaching permits for a substantial period of time.”

Judge Carr said management was aware of solutions put forward by experts but failed to address the issues and that failings resulted in “significant damage to local fish stocks”. 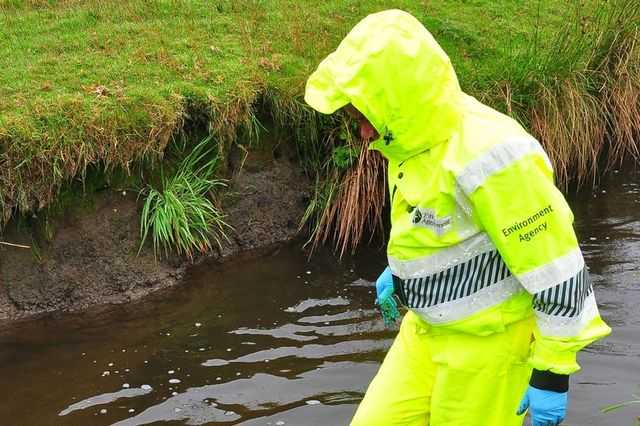 Ever since the site changed production to focus on whey processing, particularly to produce powder used in baby milk and other products, the effluent being discharged into the River Inny became more challenging to treat. This resulted in unacceptable pollution of the local river, which is a tributary of the River Tamar, and caused significant harm to fish and other aquatic wildlife.

Helen Dobby, area director of the Environment Agency, said: “As a large and well-established operator, Dairy Crest Limited should be up to the job of maintaining the required environmental standards. Instead, it has over a period of many years failed to comply with its environmental permit and not been able to protect local people and the environment.

“We acknowledge that Dairy Crest Limited has been taking steps to remedy the various problems, but unfortunately, these actions were not swift enough on many occasions and proved to be ineffective in stopping pollution.”

The Environment Agency remains deeply concerned about the environmental performance of this site and its impact on the environment. It will continue to monitor the situation and regulate this site closely and urges the operator to make the right decisions and level of investment on site to better protect the wildlife and people of Cornwall.

The court heard how people living nearby have spoken of how their lives have been badly affected from foul stenches emanating from the creamery.

A statement from Mr Potter, who lives in Trewassa, said: “Since 2017 we have had issues with horrendous smells and noise from the creamery. It was a bad eggy/fishy smell and prevented us from being in our garden and meant we had to close windows when the wind was blowing towards the bungalow.

"The smells got worse and gave myself and my wife headaches and affected our vision. My son is asthmatic so we had to get an air purifier so he can breathe in the house.” The smells led to the creation of the Davidstow Residents’ Action Group.

At the sentencing hearing, prosecutor Richard Banwell told the court that the company had placed significant blame on contractors, but added it was “inconceivable as a legal operator of a permit should be able to seek to minimise its culpability”.

Video footage was played to the court of a reddish liquid discharge into rivers which was meant to be clear.

Mr Banwell told the court there is still ongoing surcharging today, with more recent containment failures being investigated. He added that there were issues with leakage from drainage pipes and structures overground. He added that the company showed “negligence” in its actions and that “reasonable care was not taken”.

The sentencing hearing also heard from a whistleblower who worked in the water recovery treatment system. He spoke of management telling staff to do things differently than they had previously and the company using more chemicals when he left than when he started.

He also mentioned a blame game when things went wrong, disappearing log sheets and instances of bullying that even caused staff to go off sick.

He said the creamery was “a plant creating significant problems for a significant period of time” and that given there was “a catalogue of problems”, the Environment Agency should have been notified straight away of the issues. Cheese production continued throughout the time spanned by the indictment.