The total number of COVID-19 cases in Andhra Pradesh rose to 2230 after 25 new cases were reported in the last 24 hours, out of which 1433 have so far recovered and have been discharged, while 50 have died, the state health department said on Sunday. With the latest updates, Kurnool, Guntur and Krishna districts continued to be the major hotbeds in the state. Kurnool contributed 3 out of the 25 fresh cases reported in the state. Besides, Visakhapatnam also contributed 3 new cases.

The second worst-hit district, Guntur, added four new cases in the last 24 hours ending 10 am on Sunday, taking the total to 417. Krishna district reported no new cases as its count rose to 367. Nellore and Chittoor districts in the red zone in Andhra, reported one and four fresh cases respectively. Six other districts of the state did not report any new case, as per the bulletin. 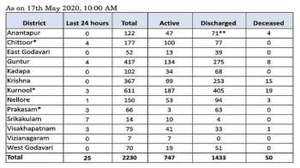 India coronavirus cases have crossed 90,000-mark taking positive patients toll to 90,927 including 2,872 deaths while 34,109 have recovered, according to health ministry's data released on Sunday. The country is registering over 3,000 average cases per day becoming a concern for the health authorities and the government.