A man was killed, we are told, with the name of god on his lips on January 30, 1948, because he wanted a word given by the nation to be honoured. On the 150th anniversary of his birth, the Kashmiris ask, ‘Is this Gandhi’s India?’ As one man whose brother had been arrested merely for speaking to the media told us, “Go back to India and cover every statue of Gandhi so that he doesn’t have to face this shame.”

For Gandhi, the only relevant factor for constituting nationhood was the will of the people.

On July 29, 1947, days before he visited Kashmir, he said “The real sovereign of the state are the people… that is why I became a rebel against the British – because the British claimed to be the rulers of India, and I refused to recognise them as such. In Kashmir too the power belongs to the public. Let them do as they want…”

The instrument of accession is conditional upon a determination by vote. The temporary status recorded in Article 370 reflected this promise.

Also read: When Gandhi Argued in Favour of Kashmir’s Right to Self-Determination

In the last 30 years, the Kashmiri people have been subjugated by every conceivable means – police torture, imprisonment, killing and last but not the least, legislative chicanery. Even their children have been blinded, a curse that was not visited upon Indians even under colonial rule. 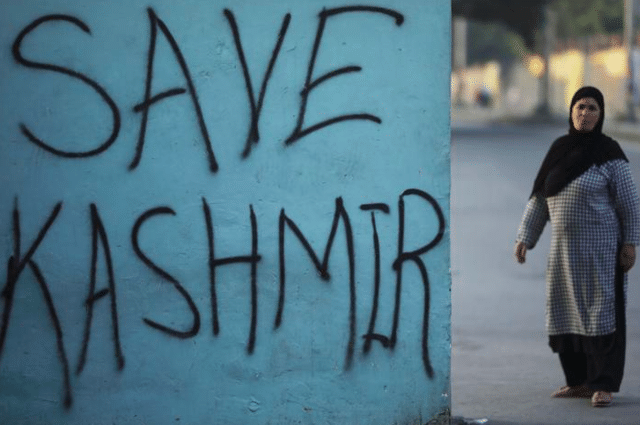 A woman stands next to graffiti on a wall in Srinagar on September 15. Photo: Reuters/Francis Mascarenhas

In the streets of Srinagar, in the extreme north of Kupwara, Baramulla and Sopore, towards the south in Shopian and Pulwama, we saw men and women aghast that a promise made in the constitution was so cavalierly violated.

It is not just the evisceration of Article 370, which was already diminished, or the downsizing into two Union Territories that upsets them, but the manner in which this was done – without consultation, with the Governor lying till the last moment, and with such brute repression.

Also read: Authorities Refuse to Reveal Details of People From J&K Detained in UP Jails Under RTI

The Kashmiris are now resisting in the only way possible, through non-violent civil disobedience. Leaderless, communication-less, this is truly an epic satyagraha; a refusal to let the state define ‘normalcy’.

“They imposed the curfew on us”, one person said, “after that, people decided on their own that they wouldn’t come out.”

Across the valley, the people at large have shut themselves up, in preparation for the long haul. Virtually all shops are shut except from 7 to 9 am.

The hartal is maintained at great economic loss to their households. Fruit mandis usually teeming with hundreds of trucks and lakhs of cartons this time of the year when apples are harvested now have the silence of a graveyard.

We saw ripe apples on fruit trees that their owners have refused to pluck. One apple grower who was losing Rs 9 lakhs this year said he was willing to suffer the losses, “if it brings us azadi.” The government’s minimum intervention scheme (MIS) for apples through NAFED has few takers.

Last year in Sopore, officials told us, the mandi turnover was Rs 1,000 crore. This year, only 586 farmers out of 94,000 farmers in district Baramulla had registered with NAFED to sell. Out of these 586, only 46 growers have actually sold fruit.

Three trucks carrying 30 metric tonnes have left the mandi in the last month compared to the 300 per day which left last year.

Inevitably, there is some coercion to ensure the hartal is maintained. A vegetable seller in Srinagar who kept open all day found his shack burnt down, an apple grower in Shopian who sold his fruit, found six trees cut overnight.

An auto driver said he no longer drives downtown for fear of random stones. The militant presence cannot be discounted – trucks carrying pre-sold apples are escorted by the military. But overall, the restraint is social and people are following it voluntarily.

The government runs full-page advertisements in the Kashmiri papers on the benefits of scrapping Article 370. Yet, for a state which has history as ancient as ‘Mulk-e-Kashmir’ (country of Kashmir), being reduced to a UT seems like no benefit at all.

Nor in a state where everyone has pucca houses, toilets and gas cylinders do the signature achievements of the Modi government – Ujjwala Yojana and Swachh Bharat – make much sense.

Where jobs have been destroyed, where families have been unable to talk, assurances that the changes are really for their own good are recognised for the insult that they are.

Also read: Centre Said It Was Bringing Jobs to J&K. Instead, It Has Brought More Unemployment

As a run up to the measure, the army and the police launched a census, an assessment of young men in households. This was then used to terrorise households into submission, with the Army picking out young men from roadside homes and beating them in villages across South Kashmir. In Pulwama, we met two young brothers whose family runs a bakery. Along with nine others from their village, they had been so badly tortured that they have been unable to work for the last two months.

Children respond to the dominant emotion they see around them with small acts of mischief – pelting stones or playing pro-azadi songs on the mosque loudspeaker. We found at least three villages where children, some as small as six years, had been detained and let off only on condition that their parents mark attendance for a week or more on their behalf in the police station.

If a man is picked up, community leaders are similarly asked to give guarantees of good behaviour. Families whose sons have been arrested and taken to Agra are scared to speak, lest the existing charges are replaced with the Public Safety Act.

“Full integration with India,” the Kashmiris find, has come with the denial of fundamental rights. Lawyers told us that in the approximately 300 habeas corpus petitions that had been filed in the Jammu and Kashmir high court, the judges gave such generous time to the government that the petitions became infructuous.

Nor has the record of the Supreme Court been any better on the habeas cases before it, leave alone an expeditious decision on the constitutionality of changing Article 370. It seems that the Indian state wishes to assert the privileges of sovereignty without recognising the imperatives of citizenship.

Militancy has not disappeared – if anything, even more children now dream of guns. “One solution, gun solution” is scrawled on walls, along with “Go Back India”, which the army has written over to read “Good India”.  But for now, militancy has also taken a back seat as people wait and watch and seethe silently inside. There is both fatalism and a furious anger.

A member of the Indian security force personnel keeps guard alongside a road during restrictions after the government scrapped the special constitutional status for Kashmir, in Srinagar. Photo: Reuters

Handing over Kashmir to Pakistan on a platter

Since 1947, India has had every opportunity to win the Kashmiris over, and keep its borders safe through fraternity rather than force.  All those opportunities were frittered away. Indian soldiers have lost their lives defending a state that would not have needed such defence had it acted justly.

The death of 40 CRPF jawans at Pulwama is a sad reminder of the politicians’ failure. The current step, however, virtually hands over Kashmir on a platter to Pakistan.

No doubt Pakistan is very far from a democratic ideal, with its own brutal share of repression in Balochistan and elsewhere. But the crumbs of affection from across the border loom large compared to what is seen as total rejection from India.

The costs to India  – politically, legally and militarily – will be much heavier than anyone is prepared for.

The Kashmiri people are now clear that they wish for no truck with India. The names of the Abdullahs and the Muftis are mud, they are seen as toadies come by their just desserts in their current incarcerations.

Hurriyat leader Syed Ali Shah Geelani, by contrast, is seen as the most credible politician. But for now, people are content to continue their satyagraha sans leadership.

That Gandhi’s ultimate weapon should be wielded by those his country intends to subjugate by military might, untruth and mal-intent, is perhaps the greatest tribute to him in the 150th year of his birth.

Nitya Ramakrishnan is an advocate and Nandini Sundar is a sociologist. The full report of their visit to Kashmir is available here.