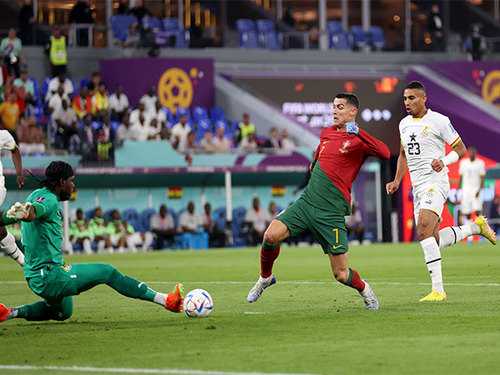 Doha [Qatar], November 24 (ANI): Ghana's defence has managed to hold Portugal's attack to ensure no goal is scored in the first half of the Group H encounter played here at Stadium 974.
In the fifth minute, Portugal's Otavio Edmilson da Silva Monteiro right footed shot from outside the box missed to the left following a corner. In the very next minute, Ruben Neves's right-footed shot from outside the box was blocked.
In the 10th minute, Otavio's assist helped Cristiano Ronaldo right footed shot from the centre of the box and was saved in the centre of the goal.
Three minutes later Raphael Guerreiro's cross following a corner helped Ronaldo's header from the right side of the six-yard box missed to the right.

Joao Felix too made an attempt but his left-footed shot from the centre of the box went high. Another attempt was saved by the Ghana team when Otavio's right-footed shot from outside the box was stopped.
In the 42nd minute, Raphael Guerreiro assists to Cristiano Ronaldo from the left side of the box was blocked. Ghana's defence stood tall despite numerous attempts.
Portugal enjoyed 70 per cent of the possession compared to Ghana, which had only 30. Portugal had two shots on target while Ghana had none. (ANI)