Ranchi (Jharkhand) [India], November 26 (ANI): Jharkhand Anti-Terrorism Squad has arrested a Border Security Force (BSF) Head Constable for allegedly supplying arms and ammunition to Naxals, extremists and organised gangs across the country.
The arrested BSF personnel has been identified as Kartik Behra. He is alleged to be the kingpin of the syndicate supplying arms and ammunition to naxals, maoists, organised gangs across the country.
"He was posted at BSF 116 Batallion at Firozpur, Punjab at the time of his arrest. He was in charge of the armoury of the battalion. A total of 8,304 cartridges were recovered from him. Besides this, three arrests were made in Maharashtra in connection with the case. 14 pistols, 21 magazines and mobile phones were recovered by the ATS," said Prashant Anand, SP, ATS to media. 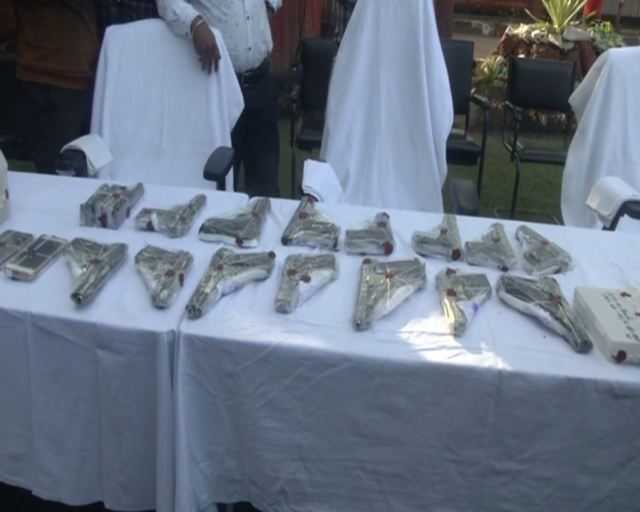 During the course of the investigation, Kartik Behera disclosed the location from where the syndicate used to procure arms and ammunition further given to extremist forces. According to ATS, these arms were procured from bordering areas of the Burahanapur district of Madhya Pradesh and the Buldhana district of Maharashtra.

A few days ago, Jharkhand ATS had arrested a Central Reserve Police Force (CRPF) jawan Avinash Kumar along with two others accused of their involvement in supplying arms and ammunition to naxals. The investigation led to another BSF jawan Arun Kumar Singh, who has retired from the force. Singh gave the ATS details about Behra.
"Singh had taken voluntary retirement from force and had come in contact with people associated with the syndicate after that. He was serving in Firozpur where Kartik Behra was also serving," added Prashant Anand. AV Homkar, the Inspector General (Operations) and Jharkhand Police Spokesperson told the media, "Jharkhand ATS is involved in a special drive against militant and organised crime groups. The aim of the drive is to also break the supply chain of the arms and ammunition being provided to such groups. So far, 9 persons of the syndicate have been arrested. Raids were done in Maharashtra, Bihar, Firozpur in Punjab, Madhya Pradesh."
The police assured that the investigation into the whole issue is ongoing. (ANI)