Ford India has pulled the plug on the 1.5L TiVCT petrol engine and the 6-speed automatic gearbox in the country. This powertrain-transmission combination was on offer with Figo hatch and Aspire sedan. In addition, the American automaker has also discontinued a few colour schemes from these models. In fact, it has also phased out select exterior colours from the Freestyle as well. The company has communicated all these updates to its dealers across the country. Meanwhile, it has been learned that Ford Endeavour is coming with a 2.0L diesel motor with a 10-speed auto gearbox.

Speaking of the 1.5L TiVCT petrol engine, it is the most powerful unit in the segment of Figo and Ford Aspire. The naturally aspirated 3-cylinder motor delivers a maximum power output of 121bhp at 6500rpm and peak torque performance of 150Nm at 4500rpm. The 6-speed auto gearbox, which the company has discontinued, is exclusively offered with this engine. It is a torque converter unit which is also the only one in the segment. Although, Ford has stated that it will introduce a new automatic transmission in both these cars at a later stage. The 1.5L TiVCT engine and 6-speed auto gearbox were offered in a single 'Titanium' trim in both these cars. The company has already taken down this configuration from the official website. 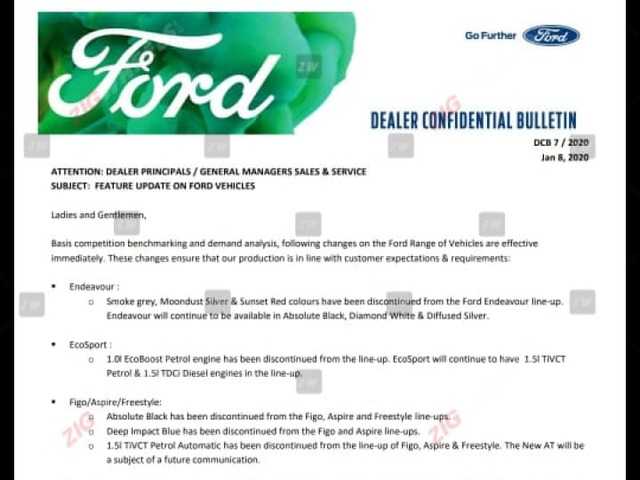 With the discontinuation, Ford Aspire and Ford Figo will now be available with one petrol and diesel engine. The petrol duties will be helmed by the 1.2L TiVCT engine which develops 95bhp and 120Nm while on the diesel front, there will be the 1.5L TDCi engine which belts out 98bhp and 215Nm. Both engines are linked to a 5-speed manual transmission as standard. The same engine-gearbox combination is available with the Freestyle.

As for the color schemes, the company has discontinued the 'Absolute Black' in Figo, Aspire and Freestyle. Additionally, the 'Deep Impact Blue' paint also bids adieu from the Figo and Aspire. For those asking, Ford Figo AT and Ford Aspire AT were retailed at Rs 7.70 Lakhs and Rs 9.10 Lakhs, respectively, in the Indian market.