The python was later set free on Van vihar National Park in Bhopal.The python is said to have come in search of prey on the populated Sona village which is in a proximity of about 2 km from the vanvihar National Park.Wild life rescuer Asif Hasan and CCF staff jointly rescued the python from the field as the python countered an attack feeling threatened.Asif grabbed the head portion and the staff managed to move the heavy weight coiler on to a big sack.

Vanvihar National Park is spread on 4.5 kmsquare and was established in 1979 and is managed by Central Zoo Authority. 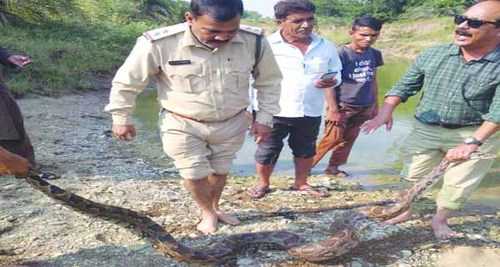