A leopard in fight with a snake; know what happened later…

Fights between animals create excitement in everyone. It is not uncommon for such videos to go viral on social media. What if the fight is between a leopard and a snake? Sure the audience will be excited. The fight between the two extremist forces has now caught the attention of the viewers. A leopard looks at a snake lying motionless. The leopard was not ready to leave. He went in front of the snake and began to attack the snake with his hand. 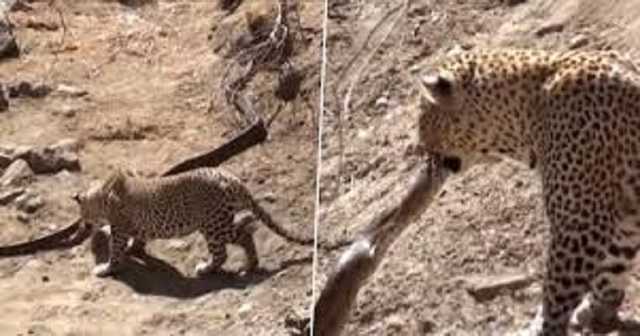 But the snake jumped up and frightened the leopard. It was preparing to attack. The leopard did not give up. Quickly approached the snake. Before a large attack can start from the side of the snake, the leopard strikes again with its hand and bites the head of the snake. The snake then does not move or try to escape. The leopard bites it too and leaves the place.

The video appeared with the caption ‘Leopard attacks a snake’. Surprising and shocking voices of those trying to record the video can be heard in the background. Many people have watched the video. The video also received interesting comments such as ‘Speed ??is important’, ‘I hate snakes’ and ‘This is a pet, snakes are all terrible’.