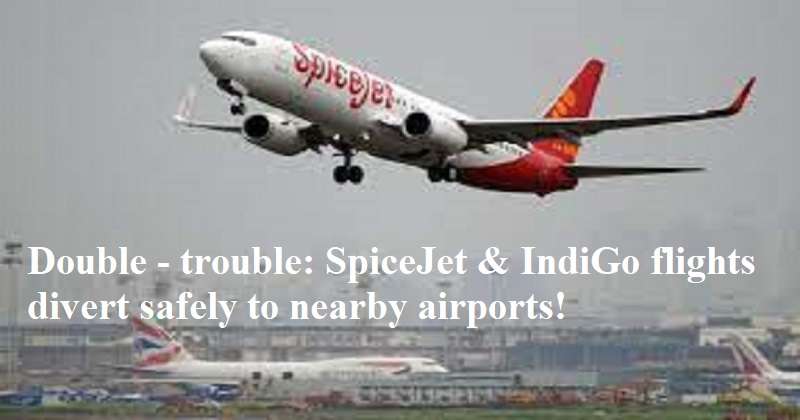 Snags forced two overseas planes operated by Indian airlines to safely divert to different airports on Friday. Three low passes were made by a SpiceJet Boeing 737 MAX travelling from Jeddah to Calicut before it successfully landed in Cochin, allowing air traffic control (ATC) to check that the landing gear lever was down and secured, according to reports.

The failure of one of the three hydraulic systems caused an IndiGo Airbus A320 that was in route from Kannur to Doha to detour to Mumbai. The Directorate General of Civil Aviation (DGCA) is looking into both of these incidents. After taking off from Jeddah, the pilots flying the SpiceJet B737 MAX (VT-MXJ) as SG-36 saw the anti-skid light go on. They completed the necessary tasks from the checklist, and the aeroplane proceeded to rise. Tyre fragments were discovered on the runway, Jeddah ATC informed the pilots later.

‘The low pressure indicator for the hydraulic system also came on on subsequent flights. The pilots opted to make a detour to Cochin after completing the necessary checklist items. To make sure the landing gear lever was down and locked on approach, they made three low passes. The planes made a safe landing in Cochin and then taxied to the port when the ATC verified this’. According to authorities, a thorough investigation is ongoing.

‘On Friday (Dec. 2), SpiceJet B737 aircraft was flying flight SG-36,’ a SpiceJet representative stated (Jeddah-Calicut). The pilots were advised by ATC that tyre fragments had been discovered on the runway after takeoff from Jeddah. A warning light came on as the flight continued. The pilots made the decision to make a detour to Cochin, where low passes were made to make sure the landing gear lever was down and locked. The aeroplane safely landed at Cochin after receiving ATC confirmation of the extension of the landing gear, and passengers disembarked as usual.

One (yellow) of the three hydraulic systems malfunctioned, forcing the IndiGo A320 (VT-ISQ) to divert. The aeroplane is currently being checked over and repaired in Mumbai. ‘ Flight 6E-1715 from Kannur to Doha was diverted to Mumbai as a precaution,’ an IndiGo representative said. The piloting crew became aware of a technical problem and decided to reroute the plane to Mumbai for required maintenance. The passengers are being accommodated for their subsequent flight on an alternative aircraft.