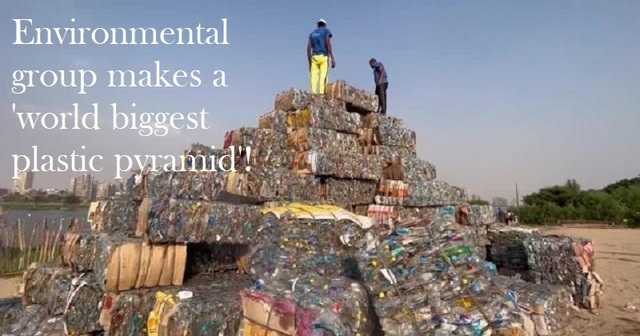 Men and women are hard at work scrubbing the Nile’s Western bank in Giza, Egypt. They are a component of the veryNile project. an initiative started in 2018 to collect plastic waste and spread awareness of the value of environmental protection. Through collaborations with regional stakeholders, the team also creates strategies for recycling and upcycling solid waste.

Volunteers constructed the enormous tower, which weighs more than 7,500 kg, using plastic waste. Farah Abd Elbakey tells that’ we decided to erect a pyramid as a significant Egyptian emblem. To demonstrate the scope of the issue, we constructed a pyramid out of plastic debris gathered from the Nile. We began gathering plastic a while back with the intention of building a pyramid’.

The volunteer said that it had been a ‘long time’ since there had been a plastic collection; the more than ‘100,000 kg’ of plastic that has been gathered since VeryNile’s inception is proof of the progress made. According to volunteer Hanaa Farouk, ‘we spent three years cleaning the Nile, purchasing plastic from the fisherman who gather it since it was more plentiful than fish. Plastic can last hundreds of years in the Nile without degrading’.

Shaking up the fishing industry!
The pyramid’s 250,000 bottles stand for ’45 days of effort by 6 fisherman’.  They’ll be recycled into textile industry-useable fibres. Around 88-95% of all river-borne plastic, including that found in the Niger and the Nile, comes from only ten rivers, according to a research cited by the World Economic Forum. The fisherman are one of the victims of pollution:

According to volunteer Zeid Ehad, ‘there are not as many fish as there once were. Since we just removed tonnes of garbage from the Nile, which has an impact on our life, the environment, and everything else, fishermen have been active in cleaning the Nile to earn additional money’.

Furthermore, the plastic that fisherman gather is made into goods like bags. They are able to get money by participating in an upcycling programme run by women from the Nile’s Qursayah Island. The Drosos Foundation, One Earth One Ocean, and the Egyptian Ministry of Environment all fund VeryNile. In November, the nation will play home to COP 27, the following UN World Climate Conference.