A man-eater tiger from Bandipur NAtional park is on the loose spreading terror on the nearby villages for two months. The tiger has mauled two humans and 14 cattle to death, after which a massive hunt for the big cat is launched. The Bandipur National park is an 874 Sqkm forest reserve for tigers, located 220 km southwest of Bengaluru.

The authorities had turned down the offer of Shafat Ali Khan to lead the volunteer team to hunt down the man-eater. Shafat Ali Khan, the sharpshooter veteran hunter made it to the news recently when his son shot down the Tigress Avni on November 2. The news became sensational with pictures of tiger cubs with the dead tigress sparked outcry and many activists including Menaka Gandhi demanded action against the hunt.

“Our priority is to tranquilize the tiger as there is no order to shoot. We are not in a hurry to shoot it but to capture it alive,” said Forest conservator in Bandipur Tiger Reserve, T Balachandra .”We are putting more track cameras where it was seen. We have increased the number of veterinary doctors and more number of staff to track it,” Balachandra said. A large number of forest officers have camped in Hundipura, Shivapura, and Kannigowdanahalli where the tiger was seen roaming. They oozed confidence that by Thursday evening they will catch the tiger using a tranquilizer. But the challenge is that the tranquilizer stock and Veterinary doctors are not adequately enough. 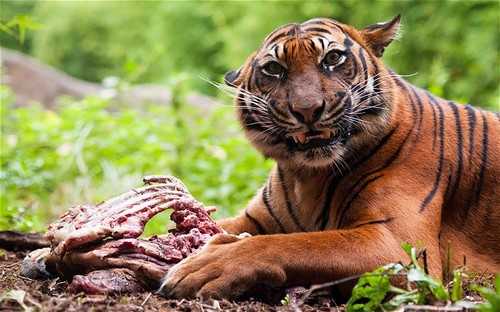