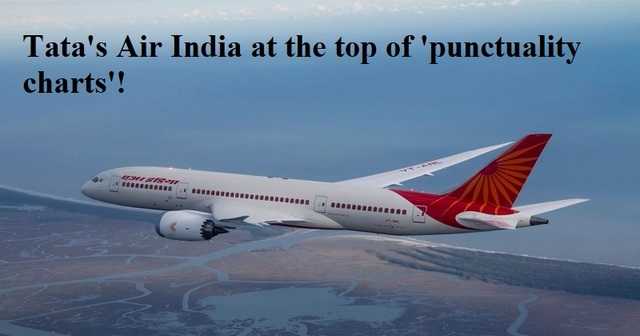 Tata's Air India at the top of 'punctuality charts'; Report

In January 2020, the government made the Preliminary Information Memorandum for the sale of Air India available. As the month came to a close, the airline’s on-time performance at the top four airports in the nation was 47.9 percent. The very next month, the last full month of operations prior to the pandemic, Air India’s on-time performance was only 51% and it continued to rank last.

In tandem with the epidemic, the airline was being sold, and in January 2022, the Tata Group officially acquired it. Despite ranking fifth among all airlines in January, the airline achieved an on-time record of 92.9 percent. There was a clear directive to increase Air India’s punctuality even while the group searched for aeroplanes and a CEO before deciding on Campbell Wilson to take over. In order to guarantee prompt departures, Campbell organised squads after joining.

The most astonishing statistic in the Directorate General of Civil Aviation’s punctuality report for October was Air India’s dominance of the on-time performance. At 90.8 percent, the airline managed to get to the top spot, having missed it by a whisker in September.

More complexity, wider network
A network of airlines becomes more complicated as it expands. This holds true for IndiGo, which earlier topped the punctuality records, as well as Air India and other airlines. When a flight is delayed, the airline has a challenging decision regarding customers who have connecting flights. Hold the connecting flight, allow the passengers on another flight, or make plans for their lodging and meals and connect them the following day? Holding the connecting flight has traditionally been the most convenient choice because lodging is expensive. Other problems include the airline’s and other carriers’ availability the next day. Due to its transcontinental network and subsequent linkages, both domestically and internationally, Air India’s complexity is a bit higher.

What did it do?
Climbing the punctuality rankings is a challenging endeavour, especially when the airline’s planes are grounded for maintenance and repairs. While it might appear crazy from the outside, several internet tools, such the flight tracking website flightradar24 and the websites of airport operators, give a fair picture of what the airline has done to increase punctuality.

Rearranging the schedule
In August, the airline underwent its first schedule reorganisation. When the Tatas took control, the summer timetable had already been set. When more teams were added, the initial schedule revision helped add frequencies, fix block times (the amount of time between the pushback at the departure gate and the arrival at the destination gate), and add ground timings. This principle was applied to the wintertime timetable.

The first wave of departures
The base flights, or the first group of planes, have been delayed from the gates throughout the previous two months. This meant that the team would have worked to ensure that the crew reports on time each and every time and that the engineering team signs off the aircraft on time. The majority of schedules at metro airports are banks of departures and arrivals, with base departures early in the morning followed by a flurry of arrivals and another batch of departures.

This could result in a longer line for takeoff, and an early pushback helps with buffers at both the airports of departure and arrival. An early arrival facilitates a longer turnaround time and a subsequent before- or on-time departure. Such strategies aid in generating an automatic buffer for any delays that might arise later in the day.

Accountability and collective efforts
There is an adage that suggests you can approach issues from any angle when they seem to be everywhere. Campbell Wilson seems to have started with everything in this instance. It was easier to identify the real causes of delays and take corrective action after forming a committee with representatives from many departments.

Easy to ascend, tough to maintain
The capacity to eventually charge more was at the centre of the entire operation. When more customers fly and do so on time, the airline will be in a position to have a standardised product and a punctuality rating that matches or exceeds that of its competitors, assisting it in commanding a premium. Although it is usually simpler to climb than to hang on at the top, the efforts appear to have paid off.

In November, IndiGo adjusted its timetable to significantly increase its punctuality. It will be difficult to hold the top spot and not merely be consistently on time. The airline came in fourth this January despite having 92.9 percent, but it was first in October with 90.8 percent. Not the percentage, but the ranking is what passengers remember.