“Indian restaurant aims to send “samosa and a wrap” into space” ; Read to know more…

New Delhi: In a unique space mission, an Indian restaurant in the UK has successfully shipped a samosa and a wrap into space- before it crash-landed in France. The Indian cafeteria, Chai Walla, which is recognized for staying one of the best-ranked eateries in the area, contrived to accomplish success in the mission in three trials. The space mission was started by the eatery’s proprietor Niraj Gadher, who utilized helium balloons to propel our favorite snack samosa into space. On his first try, the balloons slid from his hands, while the second time he didn’t have sufficient helium for the balloons, “but we landed there on the third attempt”, said Gadher. 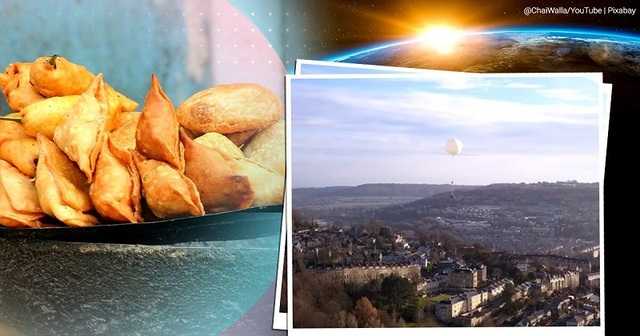 Gadher said he desired to develop some happiness around when he arrived up with the concept of sending a samosa into space. He stated, “I said as a joke once that I would send a samosa into space, and then I thought during this depressing times we could all utilize a reason to laugh. The feedback is that it’s acquired a lot of laughter from people and that’s what we required really, to spread joy,” he added.

Gadher also shared a video of the whole sortie which exhibits him along with his friends launching the samosa into space after connecting it to two helium balloons which are furnished with a GoPro camera and a GPS tracker. Even though Gadher was required to track the food item’s entire course, the GPS initially failed probably when the balloon reached high up in space, but, the next day it began working and unveiled that the samosa package had crash-landed in France.