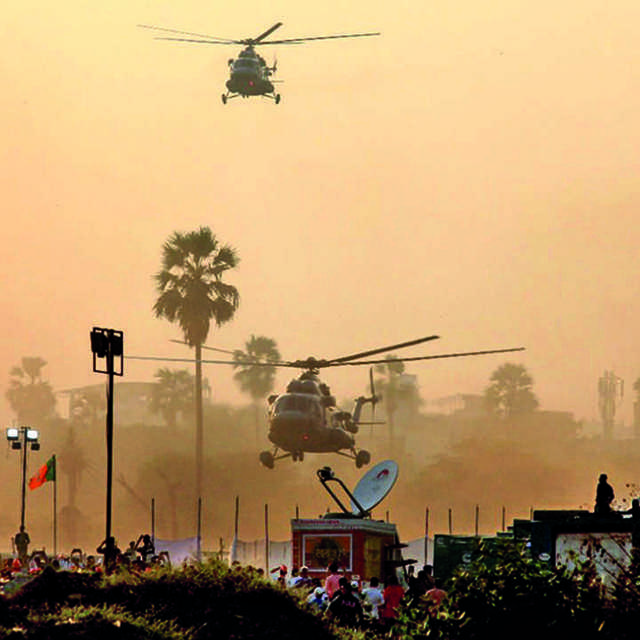 24th November, 2022 14:25 IST
Vadodara: Chanting the industrial development mantra, Prime minister Narendra Modi on Wednesday enticed young Barodians with promises of a brilliant future which he said was possible in the state due to its safe law and order situation. “Gujarat, particularly Vadodara, is manufacturing cycles, motorcycles, railway engines and now even planes. Isn’t there a bright future for youths here?” he asked a rapturous crowd at Navlakhi Ground in the city on Wednesday.

Modi said that the state’s youngsters today cannot imagine the situation that Gujarat had two decades back. Hitting out against the Congress rule in the state he said that riots were the order of the day in a lawless state and curfews were imposed frequently. Anti-social elements called the shots and the public could do nothing as “these goondas and mafias were given shelter by people in Gandhinagar”, he stated.

“That was the politics in Congress time. They had the protection of Congress politicians. Even today, look at the Cong-ruled states where news of such incidents come frequently,” claimed Modi.

Modi said that at one point in time a board Porbandar had a board at its entrance stating that law and order of Gujarat ended there. “Porbandar jail had to be shut down and inmates there had to be transferred elsewhere at that time,” he said, adding that the situation has changed today and Gujarat has reached new heights of development.

Claiming that the state has become a major centre for auto, petro, chemical, pharma industries and in ‘make-in-India’, he said that steps have also been taken to strengthen the traditional industries. Modi pointed out that in the last 10 years the state had registered an annual increase of 100 per cent in manufacturing which was a miracle for many.

Speaking about Vadodara, the PM said that the belt joining Vadodara, Halol, Kalol and Godhra would emerge as a high-tech engineering corridor. “Vadodara has dozens of factories with over Rs 300 crore investment. Some states do not have even one such unit,” he said.

“A few days ago, I had laid the foundation stone of a plane manufacturing unit in Vadodara. Youths are making rail cars manufacturing in Savli. In Dahod, a factory for making most powerful railway engines is coming up. These will be run by Indian Railways and will also be exported,” the PM said, adding that today many new sectors are being conquered in the state from IT to semiconductors.

The largest semiconductor manufacturing facility was coming up in Gujarat, said Modi, adding that the modern GIFT City, Dholera SIR, Mandal SIR and Dahej PCPIR and several other special zones were thriving today.

Modi also mentioned how tourism sites like Pavagadh and Statue of Unity were being developed around Vadodara. He said that after Pavagadh temple was damaged by a Muslim invader, he got an opportunity to unfurl a ‘dhwaja’ on the temple after 500 years. The number of visitors there has increased five to six times at Pavagadh which also has a virasat van and an archaeological park, he added.