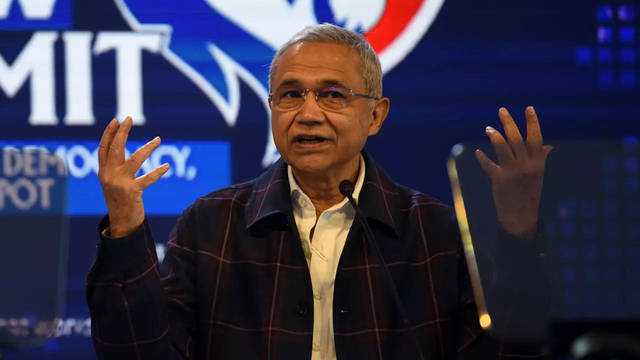 Home is where the heart is. And at the heart lies the nation. Speaking at the Times Now Summit 2022, Times Group VC and MD Samir Jain emphasised this point ahead of chief guest Union Home Minister Amit Shah’s address. “The ideal home has various people —children, elders, people who don’t earn, people who earn. But everyone is taken care of.”

This, as Jain delineated, is true for home — both for families as well as for the country. Pointing out that success is not made in a day, “but one day it certainly will come, and that day is today, the time is now, Times Now”, Jain spoke about the people’s utsah (enthusiasm), umang (hope) and ullas (celebration) merging in one anupras (alliteration). He also spoke about the difference between the vir— the brave one, who defends one’s people in battle — and the mahavir— the great brave one, who spreads peace, turning the instinct of himsa(violence) into ahimsa(non-violence). Jain also recalled Akhand Bharat, the undivided Indic civilisation that existed from Bali to Afghanistan, and how even today, while ‘naknaksh’ of sculptures and architecture are different, ‘puja’ and the form of deities remain similar.

He also spoke of the ‘new Akhand Bharat’ that the ‘Ram-Lakhan’ of PM Narendra Modi and Shah are on the cusp of heralding. Pluralism, he said, is the cornerstone of the Times Group philosophy. Sambhav (possibility), togetherness while fulfilling one’s duties (sambudhhi), and a 360-degree vision allowing all perspectives (samdrishti) together makes for samadhan (solution) — which boils down to samadhi, or the end objective. Jain spoke about how the Times Group’s belief in free speech, all languages, and all viewpoints resonates in the current dispensation.


On the summit theme, Jain emphasised peace as a strategy, saying India has never supported the concept of war, mentioning PM Modi’s remark to Vladimir Putin. “The tradition in Hindustan has been that it is never the time for war, not just that ‘this’ is not the time.” “It’s not that ‘without war no peace’, peace is the path,” Jain said. “This is not the time of Mahabharat, Akhand Bharat is history. This is the time of Maha Akhand Bharat.”