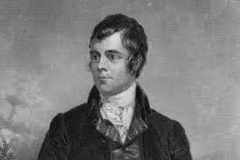 Burns Night 2023: What is it, who was Robert Burns, and where was his birthplace?

Given his enormous legacy, it is understandable why Scotland and the rest of the globe continue to commemorate Robert Burns' birthday each year.

What is Burns Night?
Burns Night, which is observed annually in Scotland to commemorate the birth of the nation's national poet Robert Burns, is regarded as our "other national day" in addition to St. Andrew's Day. In honour of "Rabbie" Burns and his renowned commitment to Scotland, particularly its people and natural beauty, Scots observe a number of cultural customs on this day.

Who was Robert Burns?The eldest of seven children born to a tenant farmer in the little village of Alloway, Robert Burns was born there in 1759. Burns produced nearly 700 poems before he passed away at age 37, despite spending a large portion of his life following his father's profession. Tragically, the funeral for Burns occurred at the same time as the birth of his son Maxwell.


How is Burns Night celebrated in Scotland?Burns Night is traditionally celebrated in Scotland with a Burns Supper, which includes haggis, neeps and tatties, as well as, of course, a glass of whisky. There are numerous occasions where revellers can take part in ceilidhs and poetry readings of Robert Burns' greatest works, such as those that take place in Edinburgh.

Burns Night 2023 is when?Every year on January 25, Burns Night is organised to honour Robert Burns, who was born on this day in 1759. Thus, the poet will celebrate his 264th birthday this year, which will fall on a Wednesday.