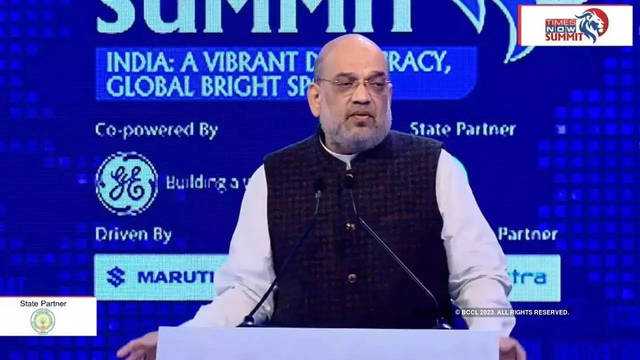 Will implement UCC but after open and healthy debate: Amit Shah

Union home minister Amit Shah said on Thursday that the BJP is firm on implementing Uniform Civil Code (UCC) across the country but keeping democratic norms in mind, this should be done only after healthy and open discussions have taken place.

Addressing the Times Now Summit 2022, he also backed the anti-conversion law in the wake of the gruesome Shraddha Walkar murder case, saying conversions through allurements or fear cannot be allowed but possibilities of a pan-India law will have to be studied. Shah slammed the Aam Aadmi Party (AAP) over alleged corruption and leaked videos showing its minister enjoying undue facilities during incarceration. He underlined that in Gujarat, where the AAP has fielded its candidates for the upcoming assembly polls, the contest is bipolar between the BJP and the Congress.

No Change can be Made (to CAA) Now: Shah
In reply to a question on why the government is not setting a time frame for implementation of UCC, he said, "We live in a democracy and here a healthy discussion is necessary. Parties may have a stand - be it for vote bank or whatever reason - but if their view is that UCC should not be brought at this time, then an open and healthy debate should be held."

He emphasised that in BJP-ruled Himachal Pradesh, Uttarakhand and Gujarat, a panel comprising Supreme Court and high court judges has been formed and that people can present their views before it.

"BJP is firm on implementing UCC and we will bring it but after all debates on it have taken place," said Shah.

He maintained that UCC has been a consistent promise throughout the political journey of the Bharatiya Jana Sangh to the BJP today. "Even the Constituent Assembly had suggested that whenever the right time comes, UCC should be implemented, as for any secular country, laws cannot be made on the basis of religion," said Shah. "When the country and its states are secular, then how can laws be on the basis of religion? There should be one law passed by Parliament. But, over a period of time, this view of the Constituent Assembly was ignored by all parties. Today no party is for it - if they don't have the courage, then they will not oppose it but will neither say implement it, we are with you."

He differentiated between UCC and the process adopted to abrogate Article 370, saying the latter was a temporary provision and the view at the time of Independence was that some time is needed for Jammu and Kashmir to integrate. Asked whether UCC will figure in the BJP's manifesto for the 2024 general elections as well as it may not be implemented by then, Shah said, "That only time will decide. Who knows, two-thirds of the states may implement it and then the Parliament will also have to take a view. Don't worry, we are going to come to power again in 2024 and we will implement it then."

On the Shraddha Walkar murder case, the home minister said the government will take all necessary steps to ensure the culprit is given the strictest punishment as per law.

Asked if the case underlined the need for an anti-conversion law at the earliest, Shah said, "In whichever state BJP government is there we have passed the anti-conversion law and, at least for Gujarat, I can state in detail that we implement it strictly. If you read the Constituent Assembly debates, it has clearly separated propagation of religion and converting through offer of allurements or through fear. This is the spirit of the Constitution and the Supreme Court has also made it clear."

Asked whether a pan-India law banning conversion can be passed, he said, "On the (issue of implementing it at) national level, it is a grey area as it (law and order) is a state subject."

The home minister asserted that democracy has reached the grassroots in Jammu and Kashmir since abrogation of Article 370. "In Jammu and Kashmir, the Modi government has brought about a big change. For years it was propagated that Kashmir is with India because of Article 370 and 35-A. Today, 30,000 sarpanches and panches have percolated democracy to the grassroots and a new generation is coming up. ₹56,000 crore investment has come to the state, 80 lakh tourists have visited which is highest since Independence. The languages of the state have been given recognition, the SC-ST communities have got benefits of reservation, women have got property rights, electricity and tap water have been provided to each home," he said.

On the issue of whether Citizenship Amendment Act (CAA) has been put in cold storage, Shah said, "Nothing has been put in cold storage. CAA is a law of the country and no change can be made now. Delay was due to the ups and downs of Covid. Now that Covid is ending... I can only say that those dreaming that CAA will not be implemented are making a mistake. CAA is a fact and a law of this country."

Terrorism is still a serious issue in Jammu and Kashmir, he said, though it has come down drastically. "Least amount of terror activities are taking place today since 1990s when terrorism began. Stone-pelting is zero. Many political pundits used to say don't touch Article 370, you will burn your hands," he said, adding that while earlier 400 Kashmiri Pandits were killed, today the number has come down to 12 and will soon reach zero.

"Terrorism and those harbouring it have such deep roots that uprooting it completely will take time. We are in that process. We will not let the roots proliferate and we are committed to ending it," he said.

The country has managed to meet the three very tough challenges before it - Kashmir, insurgency in the Northeast and left-wing extremism, said Shah. Similarly, the three "malignancies" of caste, family rule and appeasement have been replaced by "politics of performance", he said.

Ahead of the Gujarat election, Shah said the state has always had a bipolar contest. Chimanbhai Patel, Shankarsinh Vaghela and Keshubhai Patel tried to make it triangular at different points but could not succeed, he said, dismissing the AAP as a contender.