Indian music not only soothes ears of people from the country but worldwide. It wouldn't be incorrect to say that music has no boundaries, Pakistani beat 'Pasoori' to Moroccan singer Saad Lamjarred's Arabic beats, people have fell in love with those lyrics, tune and the entire composition for all.

Netizens, at times, like to hear Indian songs from international celebrities. So do they enjoy singing some beats from the Asian nation. In the past, foreign singer such as Emma Heesters, Chicha Charles and others went viral for trying popular cine tunes in their voice. Now, a female singer identified as CassMae from Germany is winning hearts of Instagrammers with her love for Indian film songs.

CassMae is known for trying various South Indian movie beats in her melodious voice. Her recent upload is a sneak peek into her singing the great Asha Bhosle's ghazal ''na thi mujhse berukhi pehle.'' She is heard getting immersed into the beautiful lyrics, "Jisme shamil tumhari marji thi."

The video caption suggested that CassMae sang the beautiful Indian melody as a gift to a close relative. Sharing the video on Instagram, she wrote, "This ghazal by @asha.bhosle is a very special surprise for Susan who is part of our family, visiting from the US She showed me this song first day she arrived..."

Since the German talent uploaded her music reel on social media a while ago, it has won hearts of netizens. It has soon gained over 40K views and thousands of likes.

Take a look at the comments section filled with love emojis: 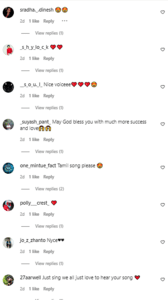