Asus has been trying to save gaming laptops from body shaming for a while now. The company launched its Zephyrus thin and light gaming laptops a couple of years back and then, it brought the Zephyrus G14 last year which was among the most compact 14-inch gaming laptops in the market.

However, now the company has something in hand which will not only save gaming laptops from being called big and bulky but also break the myth behind being loud by design and aesthetics. At the same time, it is also capable of putting most ultra-thin and light laptops to shame.

The machine we are talking about is the all-new ROG Flow X13 -- Asus’ first gaming laptop with 13.3-inch display with ultra-portable and compact design. 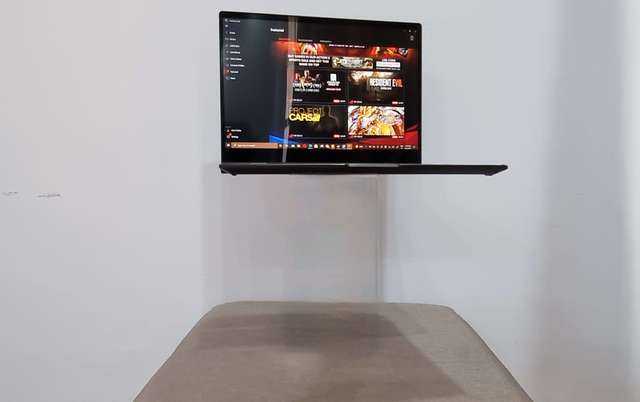 The laptops come with dedicated Nvidia GeForce graphics. Plus, it is powered by among the most powerful AMD Ryzen 5000 series processors. Apart from that, it offers a big battery, up to 4K touch display, liquid metal cooling system, a dedicated PCIe express slot for external graphics card support and all that in a thin and light 2-in-1 form factor.

We definitely don’t have any idea how Asus managed to engineer everything inside a machine of this size. But, what we can tell you is whether this machine is a tiger sleeping in a wolf's body or it is just another thin and light laptop with big hopes. Let’s find out in our full review of Asus ROG Flow X13.


Asus ROG Flow X13: Design and display
Just like a thin and light chassis design, Asus has been trying to tone down its ROG laptop’s aggressive aesthetics by opting for a much cleaner and simple design. The ROG Flow X13 is a step ahead in that pursuit.

The Flow X13’s completely blacked out design not only makes it a better overall machine as a whole convertible laptop, but it kind of retains that ‘muted’ gaming appeal as well. The sandblasted exterior texture gives a carbon-fibre look to it and it gives a much premium and ‘brutal’ look to it as a gaming machine.

The keyboard deck is also Black with even thinner textured lines. Asus has mentioned that they have used a different paint job that maintains an optimal temperature. We tested it by keeping it below or AC for around an hour and the laptop top and bottom area still felt optimal to hold comfortably without feeling extra cold like we see with metal body laptops. 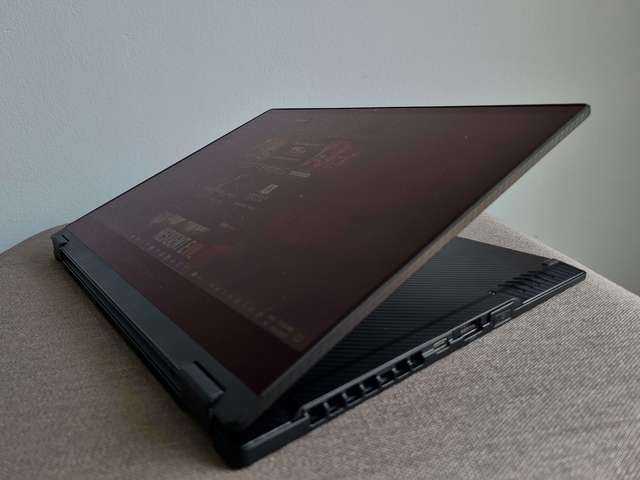 Asus has made this laptop using aluminium, magnesium and plastic. The plastic is just the bottom part and just to clarify it has also got the same texture pattern as the lid. The whole mixture of different materials seems to be working for this laptop. Despite the fact that Flow X13 is just 15.3mm thick, the chassis seems to be very rigid and there’s no flex on the keyboard deck or the display. In short, it's a ROG machine and it’s built like one too.

Port selection is also good and we are glad that Asus still understands the importance of I/O in a laptop. The Flow X13 just has enough to take you through a day without the dongles dreams haunting at night.

It comes with 1xUSB Type-A, 1x USB Type-C, an HDMI port and a 3.5 combo headphone jack. There's another port on the left side of the laptop which is basically a PCIe express port along with a USB Type-C port for connecting XG Mobile GPU.

XG Mobile GPU is an external graphics unit which the company will launch in the coming months. The XG Mobile GPU will come with an external RTX graphics card (up to RTX 3080) to give that extra punch to the laptop’s performance.

Coming to the hinge, the 360-degree hinge is among the best implementations we have seen in recent times. The reason behind it is not because it’s smooth, or it holds the display no matter what angle it is set to or in what mode you are using the laptop. It’s because it is probably the only convertible with 360-degree hinge that allows you to lift the lid with just one finger.

The only thing Asus missed here is adding a couple of rubber grips at the display part. As while using the laptop in tent mode, the laptop tends to slip a bit.

The laptop comes with a side-mounted power button that also doubles up as the Windows Hello supported fingerprint scanner. The placement of the fingerprint scanner is a bit odd no matter in which mode you are using the laptop. Also, the company has not provided any button for adjusting the volume while using tablet mode, so you have to rely on the touch-based Windows controls which is also not a convenient option to go with. 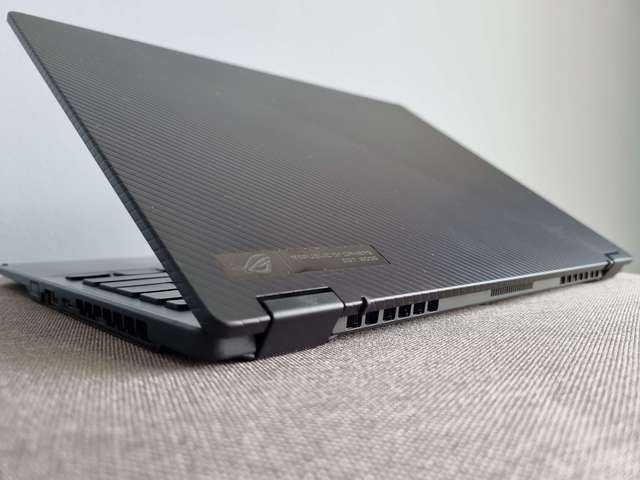 Coming to the display, Asus Flow X13 features a 13.4-inch display. Depending upon the model you are buying, it is available in two resolutions -- a FHD display with 120Hz refresh rate and a 4K UHD panel with 60Hz.

Both are touch panels and support stylus input (thankfully Asus included one in the box). Our unit came with a 4K panel and it is sharp, vivid and vibrant. It has the right amount of peak brightness and offers a good touch response as well. It’s a Pantone validated display and colour accuracy is also good which makes this display good for both gaming and content creation. We also liked the idea of a 16:10 aspect ratio as it makes the display a little broader to fit more content on the screen and it also does not put thick Black bars at the top and bottom while playing games or watching movies.

The 8 core and 16 threads processor might feel like overkill for a 2-in-1 convertible machine as most of them are meant for work or student purposes. The Ryzen 9 5800HS is powerful enough to handle heavy tasks like editing, gaming, etc and calm enough to handle day-to-day stuff without making a hiss.

Apart from this everything works fine. Opening and closing of software, games etc are fast and fluid, thanks to faster storage Asus has opted with this laptop. 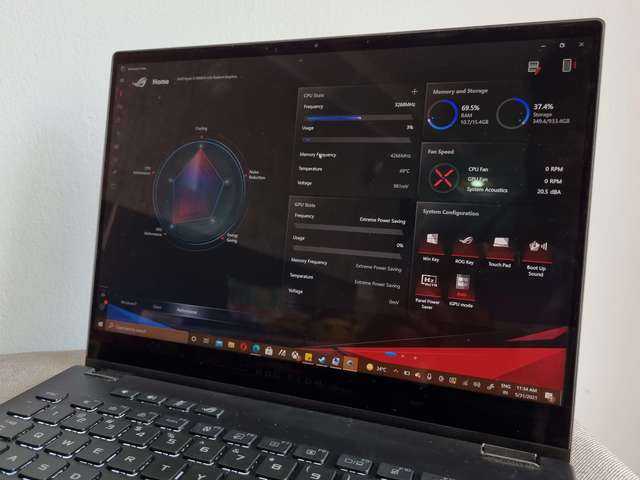 Now, the whole idea of Flow X13 is achieving a balance between portability and performance. To an extent, Asus has managed to attain that. But is it without any compromises? In our view, it’s not, but not as many as we usually see brands make to keep the price in check.

The keyboard is smooth, silent and responsive. Key travel for a laptop this thin is also good. Asus has used a while colour backlit laptop with Aura sync technology. The backlit is just average because we have seen a much better White colour backlit from the company. The keyboard also comes with dedicated keys for a microphone, volume and Armory Crate button.

The glass trackpad backed by Windows Precision Driver is also good at tracking. It never skipped or jumped during our usage. The size for that matter is also optimal for a 13-inch laptop.

The Wi-Fi card is an Intel unit and in our test, it wasn’t as powerful as we would like to see on a gaming machine. Simply put, the Wi-Fi performance could have been better.

Another important aspect of the machine is the audio. Asus has backed this laptop with two speakers placed in the front-bottom area. Well, these speakers are average. They sound good and clear. A little more loudness would have been great. We also tried tweaking some settings with the Dolby Atmos app the laptop comes with, it barely made any difference.

Despite thin bezels, Asus has included a webcam. Nothing fancy here. It’s a 720p webcam which is average in terms of quality but will get the work done.

Asus ROG Flow X13: Gaming and creator performance
The combination of an AMD Ryzen 9 processor and Nvidia GTX 1650 isn’t the most desirable hardware for a gaming laptop. But it certainly makes a strong case with the small chassis it is tucked in.

Also, cooling the machine becomes a challenge with these kinds of laptops which have no additional breathing space after putting all the components inside.

In our test, we used this laptop for almost everything from usual Microsoft Word level tasks to editing photos and videos to high-end gaming. 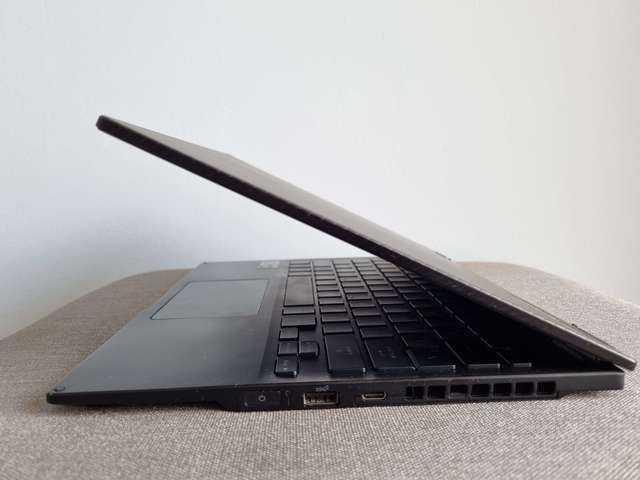 The Flow X13 almost pioneered the high-performance ultrabook with its consistent performance. We edited several photos and videos on this machine using Adobe Lightroom, Adobe Photoshop and Premiere Pro. The rendering speed was spot on and the 4K export speed was also good. While doing so, we could easily browse or watch another video without breaking any sweat from the machine.

Gaming is a lot more demanding and this is the place where we think the additional XG Mobile Graphics unit will come in handy. For now, the Flow X13’s Nvidia GeForce GTX 1650 does a decent job. We tried several games like CoD Black Ops Cold War, The Division 2, Cyberpunk 2077 and a couple of lightweight games.

The Cold War defaulted to medium-high graphics settings and managed to achieve the 60fps mark and sustain it even during our longest gaming session of 8 hours straight. The Division 2 and Cyberpunk 2077 are slightly more demanding but we still got more than playable frame rates on this laptop.

But, what brought us to surprise is the thermal management of the laptop. While playing games, the keyboard and palm rest areas are relatively cooler compared to the top portion. This is obvious, but the laptop sustained an 80-degree mark throughout the gaming session which is really good.

Though at this stage, the fan kicks in really high around 8000rpm and you can clearly hear them.

Overall, the ROG Flow X13 even without the additional graphics unit is a respectable gaming machine that delivers.

Asus ROG Flow X13: Battery life
Asus ROG Flow X13 comes with a claimed battery life of 18 hours and in our test, it was nowhere near that. Even with performance mode set to silent and minimum brightness, we managed to get only around 6-7 hours of battery in a single charge.

There’s a 100W USB Type-C PD charging adapter that supports fast charging. It charged our laptop to almost 70% in under 45 minutes and full in under 1 hour and 15 minutes.

Asus Flow X13: Verdict
Asus did create a one-of-its-kind gaming laptop with Flow X13. It is a convertible, a gaming laptop, a laptop for creators, an ultrabook, a tablet and a workstation. Overall it is a good and capable machine which is also priced right by the company.

For the starting price of Rs 1,19,990, the Flow X13 is much more than just a lightweight machine. It can handle gaming at a decent frame rate and offer performance that almost no laptop of this form factor can offer. 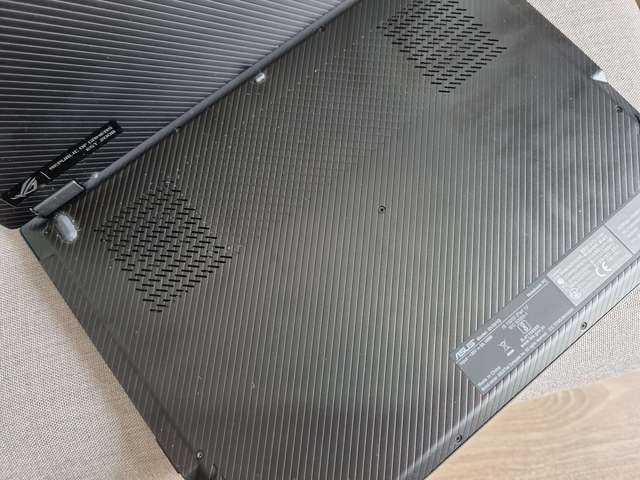 More interestingly, one can always get the optional XG Mobile external GPU to further enhance the performance of the laptop.

If you are someone who has always owned a gaming laptop as a kid and also want to own one as a grown-up without going through all the pain of carrying it around or people looking at you weirdly when you open them in your office or a cafe, then the Asus Flow X13 is just the laptop for you. For others, who are looking to buy a good ultrabook that offers good performance, they should definitely give this laptop a look.