Gadgets Now
24th August, 2019 15:57 IST
Motorola as a brand has always been considered as proved to be a great fighter against the competition. There have been several ups and downs in the overall timeline of the company and this is the time where the company seems to be working hard to capture the market again by launching its One series smartphones. Motorola announced its Motorola One Vision a while ago and now, the company has come up with a new smartphone under One-series. Dubbed as Motorola One Action, the smartphone’s most touted feature is the new ultra-wide lens and the idea of video recording. This is what Motorola is claiming to be the world’s first smartphone capable of shooting stable videos like an action camera using the smartphone. Another essential feature of the phone is the ability to shoot landscape videos while holding the phone in portrait. Well, the idea here was to make the video recording simple and more stable.

Well, with all this new idea and claims, here we are with the review of Motorola One Action. 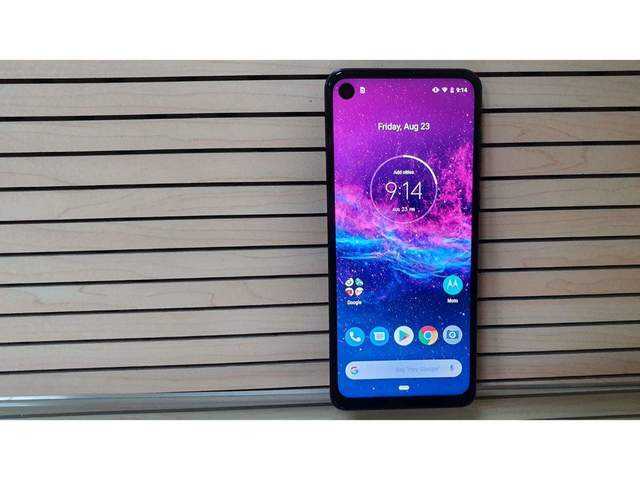 Motorola One Action: Design
Well, If you have seen the Motorola One Vision, the One Action is not much different. The new Motorola One smartphone is almost identical in terms of overall design except for that additional third ultra-wide-angle lens at the back. Those who haven’t though, the front of the phone has 21:9 aspect ratio display which results in overall taller looking smartphone and which leads to a bit of compromise on the one hand usability of the phone. To bezels around the display is thin except the bottom chin. The display also holds the front camera in the form of punch-hole, which for our liking is quite big and does make it feel a little disproportionate from rest of the design. 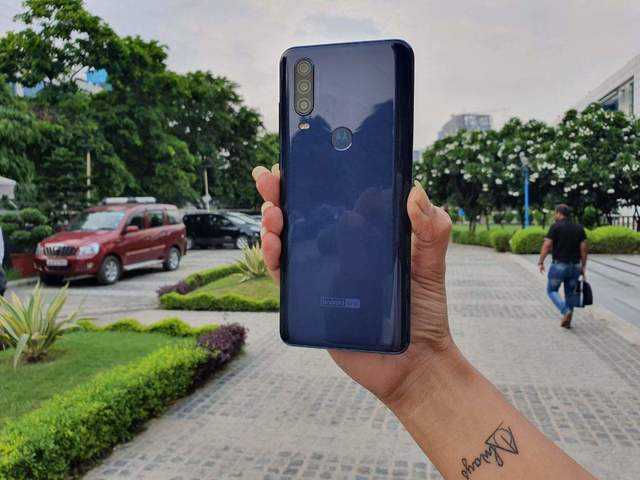 At the back, there is the triple rear camera setup with the Motorola logo at the center which also doubles up as the fingerprint scanner. Yes, there’s no in-display fingerprint scanner here which now is a very common among smartphones in this price segment.

Button placements are similar too, the left has the power button and right side of the phone gets the Volume rocker. Buttons are positioned well and provide good feedback when pressed.

The bottom of the phone has the charging port, speaker grille and microphone, while the top has the good old 3.5mm audio jack.

Overall, Motorola One Action is an exact replica of the One Vision with the exact same design, display and build. Motorola could have done something different with the design to make it more aesthetically appealing.

Motorola One Action: Display
As mentioned, the smartphone features a 6.3-inch IPS LCD display with a taller 21:9 aspect ratio, which does make the smartphone stand apart from the crowd. It also helps users get extra screen state while skimming through Instagram, Facebook or even while browsing or for those apps which are designed to work in portrait mode. And that’s it, this is the only place where we were able to use that taller aspect ratio. But there is not much multimedia content available that can actually use the 21:9 aspect ratio. Though videos which are shot in a wide-angle work fine and are also treat to eyes while watching on One Action. The actual problem with the phone is letterboxing while watching typical 16:9 aspect ratio videos. Manually expanding the video chops the top and bottom by a huge margin. 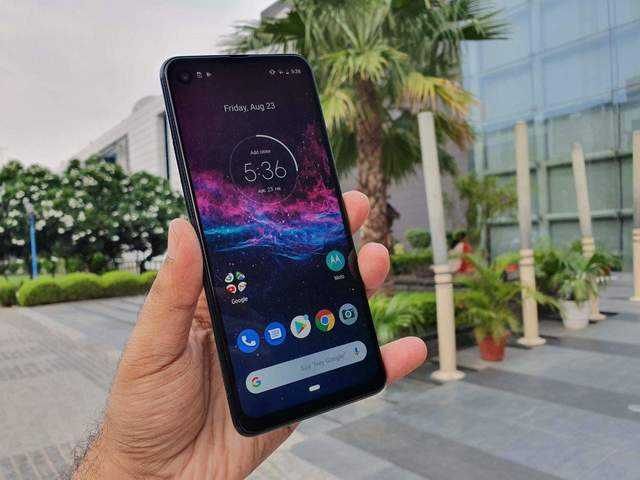 In terms of quality, the display is good, produces vibrant colours, has decent viewing angles and sunlight legibility.

In terms of performance, the smartphone gets the same Exynos 9606 processor that we have already witnessed in the One Vision. The performance of Exynos 9606 is not that bad, the phone handles day-to-day tasks with ease and it also outshines some of the mid-end Qualcomm processors in terms of benchmark results. But benchmark results do not always result in the better overall performance of the phone and Exynos 9606 is the biggest example of that. The performance hiccup starts showing up while playing games, For example, smartphones with Qualcomm mid-end processor manages to run games like PUBG Mobile, Asphalt 9 at the high settings but here, we need to tone down the settings to Medium to make it run smoothly. 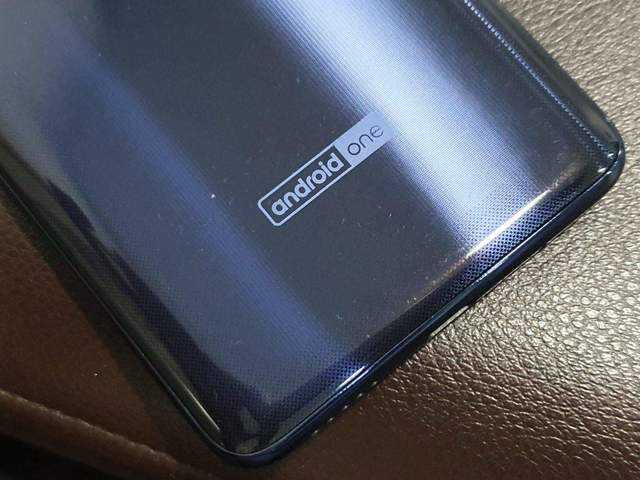 Operating System is one of the strongest parts of Motorola One series smartphones as it runs on the latest version of Android operating system and being the One series device, the smartphone does not come with any bloatware or custom user-interface. The Android One smartphone also comes with a guarantee of getting the software update for up to 2 years.

Though the stock Android user-interface is not as good as others but it manages that flaw by providing an unbloated usages experience which also helps reduce the load of the extra layer of UI on the processor.

Motorola too hasn’t decided to play around with the operating system. But there are a few apps and features like Moto Help, FM Radio, Dolby audio support and some gesture-based features like shaking the phone turns on the camera, chop-chop flash, etc that comes preinstalled on the phone.

The speaker sounds good and the output from the earpiece was also good and we did not notice any signal drops or anything as such with the smartphone.

Let’s start with the most touted feature of the smartphone is the ability to shoot stable videos with the help of the new 117-degree ultra-wide-angle lens. Let’s be honest here, the idea of putting an ultra-wide-angle lens is not new. There are several smartphones, even in a relatively lower price range that offers an ultra-wide-angle lens. But Motorola’s implementation is what we call innovation. Motorola’s ultra-wide lens is a dedicated lens for shooting videos and a user can only capture photo using the ultra-wide lens is while shooting the video. Second important part of the lens is its orientation, the lens orientation is reversed from the traditional angle that allows users to capture a landscape video while holding the phone in its most natural position. Sounds confusing right? Look at the photo Referring to the image, the viewfinder of the phone shows a landscape window on the phone while holding it upright. Traditionally, we need to hold a smartphone in landscape to shoot a landscape video. In this case, the entire setup is reversed, making it easier and more comfortable to shoot in almost any situation without the fear of accidentally dropping the phone.

That was the implementation, now let’s move to the quality of the recorded video. The video quality is good and it manages to capture minor details with good colours and clarity. What came as a surprise is the level of distortion. A wide-angle lens is expected to add some distortion to the overall footage, Motorola has somehow managed to reduce the distortion to an extent which we really appreciate. But the catch here is that this feature works only while using the wide-angle lens.

As it is claimed to offer an action-camera like a video there, there should be an excellent video stabilisation as well. During our test, we tried shooting videos while riding, jumping, intentionally shaking our hands and the smartphone managed to get stable videos most of the time. 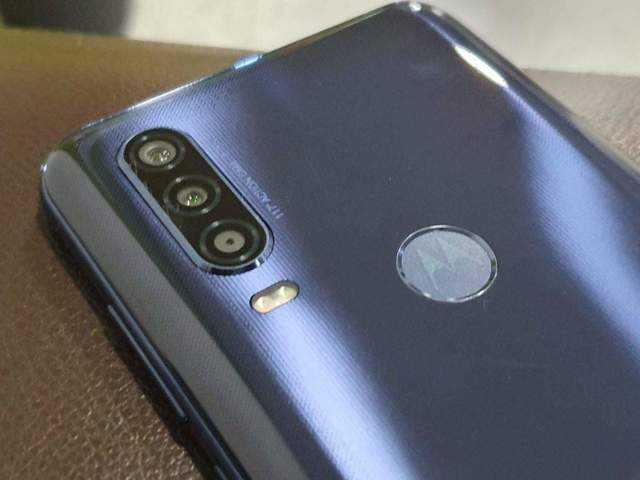 Talking about the other two cameras at the back, they are again same as of Motorola One Vision. The primary sensor is of 12-megapixel sensor does a good job of capturing details, dynamic range, clarity and colours. Though it does tend to boost the colour vibrancy a bit but that’s not something to worry about. All this is true while shooting in well-lit conditions, including indoors. The low-light performance where the smartphone really struggles to get things right. As the light goes out of the picture, noise starts creeping into the photos even with the dedicated Night mode which is designed to capture more light in dark scenarios, but all it does is adding more light and noise to the photo.

The camera also comes with a dedicated portrait mode using the secondary 5-megapixel camera sensor. The portrait photos from the camera is good and manage to keep the subject intact without any rough corners from the background.

Video quality from using the primary lens is also acceptable and is capable of shooting 4K videos at 30fps.

Overall, Motorola One Action does what it claims, at least in the camera department.

Motorola smartphones in most cases, have been proved to offer good battery backup smartphone and One Action is no different. The smartphone manages to get around 5 hours of screen-on-time on normal usages. This includes browsing, skimming through social media feed, watching movies, calls at a 50% brightness and Wi-Fi. 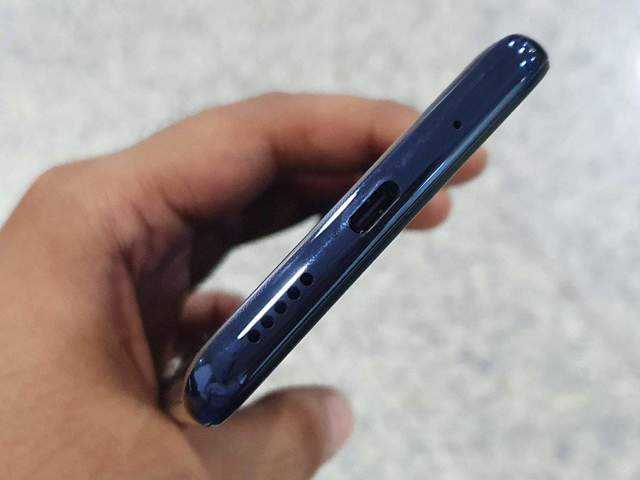 Motorola One Action: Verdict
At the price of Rs 13,999, The overall specification of the Motorola One Action is also in check with optimal performance, acceptable camera quality using the primary sensor, Android One operating system and more. The irony here is that the Motorola One Vision, which feature almost similar hardware specification costs Rs 5,000 more just for the 48-megapixel sensor. The bummer here is again the 21:9 aspect ratio which as of now sounds like a gimmick. But maybe in future when more contents in that aspect ratio will be made available then this whole setup might start making sense. 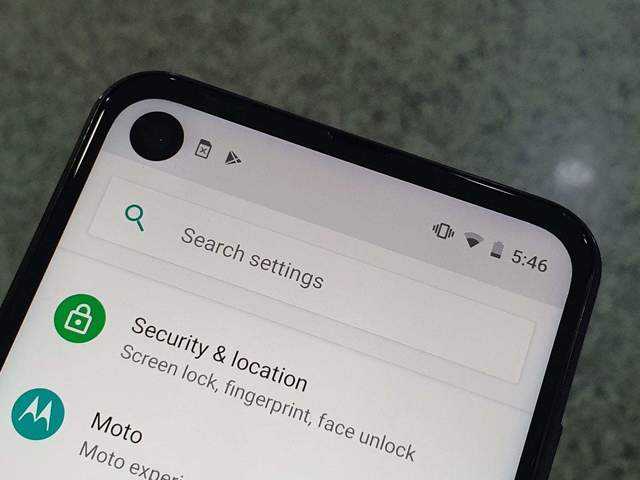 Keeping the overall performance aside for a while, the Motorola One Action stands to the claims made by the company. The action-camera like video footage is just as it was described, which makes it a good smartphone for shooting stable videos in almost any situation. The ability to shoot landscape video while holding the phone in portrait comes as an add on bonus and makes shooting videos as easy as saying Lights, camera and….Action.