For the majority of his life, archer Pravin Jadhav resided in a shack near a drain in Sarade village in Maharashtra's Satara district, as per TNN.

Jadhav's early life was full of hardships.A decade ago, he had no idea that archery was an Olympic sport.

His father, Ramesh, was a daily wage labourer at a construction site and his mother used to be a farm help. There was a constant struggle to provide the family with two full meals a day.

"Our condition was really bad then. We lived in a hut. We didn't have electricity and there was barely any money," recollects the 25-year-old, who will be representing India at the Tokyo Olympics. Jadhav will team up with Atanu Das and Tarundeep Rai in the men's recurve team and also compete in an individual capacity.

There came a time in his life when he almost joined his father as a daily wage labourer. Struggling to make ends meet, Pravin's father had told him that he had to drop out after Class 7 and join him at the construction site.

"Like most people in Sarade, I almost joined my father as a daily wage labourer," says the archer.

But then destiny had something different written for him. Pravin used to study at the Zilla Parishad School in Sarade. His sports teacher Vikas Bhujbal knew about his family's financial condition and urged Pravin to get into athletics so that he could earn some money.

"Bhujbal sir told me to start running and take part in competitions. 'At least you would get to earn and won't have to go to the construction site', he told me. So I started running 400 and 800 metres," recalls Pravin.

But being severely undernourished proved to be a bane for Jadhav in running. Once he fainted while just warming up. Bhujbal provided all the dietary requirements and incurred the expenses for Pravin's training so that he could compete.

With a better diet, Jadhav tasted success at taluka and district level. This earned him a selection for Maharashtra government's Krida Prabodhini scheme, which provides free coaching, education and lodging to athletes from rural areas at residential academies.

Archery came his way by accident at the Krida Prabodhini hostel in Ahmednagar when he was selected for the sport during a drill when he threw 10 out of 10 balls in a ring from a 10-metre distance.

"Since my body was a little on the weaker side, I was asked to try out archery and I have continued with it since then," says Jadhav.

Thereafter, Jadhav was stationed at Krida Prabodhini in Amravati, Vidarbha, sharpening his archery skills. Initially, he used a traditional bamboo bow for a year before moving on to modern equipment.

Archery is a difficult sport to master. Most budding archers go through a tough time initially and many lose patience within a year. Pravin struggled with the weight of a recurve bow and used to experience pain in his shoulders while firing the arrow. Despite being weak physically, a determined Pravin kept at it. He soldiered on through pain and a flurry of bad results during the learning curve. 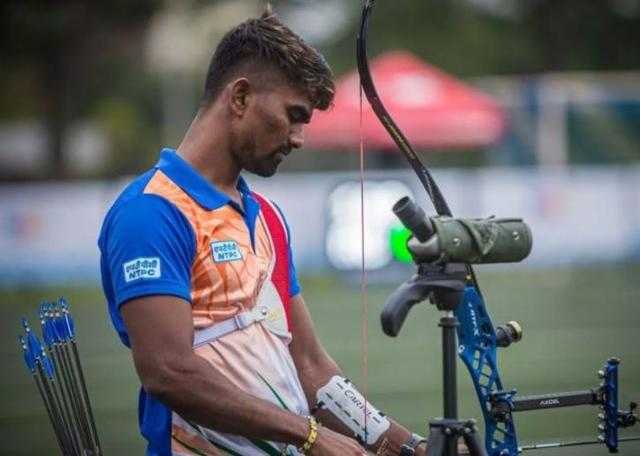 "I was aware that I would have to work as a labourer if I didn't succeed (in archery), which is why I continued working hard. In the toughest times, my thinking used to be that after doing all the hard work to reach this stage I can't let go and accept defeat, so I kept working hard towards my goals," he said.

The next trial for Jadhav came when his stint at the Krida Prabodhini was coming to an end and he had to buy his own archery equipment so that he could continue his journey in the sport. An archery kit costs around Rs 3 lakh and he didn't have the finances.

"The government helped me out. As I had participated in a World Cup (2016 Archery World Cup in Medellin, Colombia) for India, I got the government grant and used that money to buy my equipment."

Jadhav's financial situation has improved a bit, especially after he joined the Indian Army in 2017 on sports quota. He now trains at the Army Sports Institute in Pune.

The journey from Sarade village to Tokyo has been arduous, but Pravin knows he is living his dream.