Angel Has Fallen Movie Review: Officially, My 'Interest Has Fallen' From This Franchise!

Angel Has Fallen Movie Review: Officially, My ‘Interest Has Fallen’ From This Franchise!

What’s Good: The hope of being this a final nail in the coffin (read: franchise)

What’s Bad: There’s not a single good thing to list the film!

Loo Break: Not a chance if you read the review until the end, because you’ll not watch it!

Watch or Not?: Same as above!

After some lazy attempts at rescuing the POTUS, Mike Banning (Gerard Butler) is back, and nothing’s changed now. The calm start shows how Mike wants to reject the job offer of the Director of the United States’ Secret Service. A couple of migraine attacks later, he decides to guard the President (Morgan Freeman) over his fishing trip. As he has another concussion on the boat, he sees a hundred drones aiming at the President.

He tries to save him, but his entire team gets sacrificed in the mission, POTUS goes to coma, but Mike is saved. The FBI then handcuffs him to investigate about he was the sole warrior during the warfare (Dear FBI, haven’t you seen the first two parts of Fallen franchise? Mike is Gerard Butler). Everything goes against Mike, but those who’ve seen the first two films know what’s going to happen in the end. 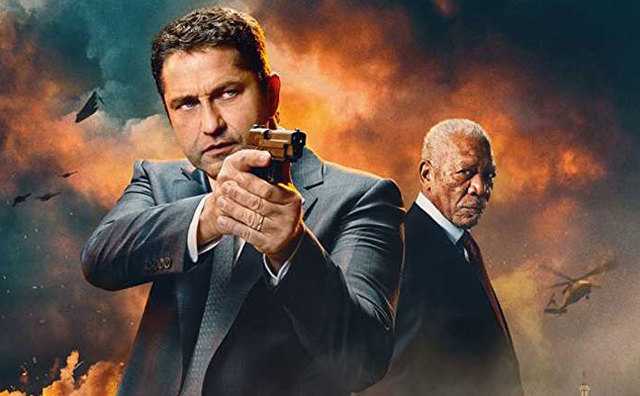 Creighton Rothenberger and Katrin Benedikt’s story tests your patience. From the word go, we all know Mike isn’t responsible for POTUS’ condition. This just creates a tedious black hole which just sucks your interest in. Even the action sequences aren’t well-shot to at least grab the attention of the potboiler fan in you. The story just takes the main plot and drags it throughout. There’s nothing else going on it, apart from catching Mike.

Even the sequences, which could’ve been filled with slick VFX, are so poor in production values that you’ll not bother to even look on the screen. Every twist turns out to be lamer than the previous one, and there’s nothing to be shocked or surprised about. From the Russian connect with the false framing of Mike to the involvements of the Vice President, there’s nothing you couldn’t predict beforehand.

Gerard Butler continues to do similar kind of acting in the franchise. I read somewhere he’s the ‘weirdest action star’ in Hollywood, and this movie concreted my thoughts about it. He looks at his character, acts like him as well but somehow because of the poor writing, he gets nothing to make it a stand-out performance.

Morgan Freeman has an extended cameo, as his majority of the screen time goes under the influence of the coma. He doesn’t act, he sleepwalks in this one. From the supporting cast, Danny Huston as the antagonist is decent. Tim Blake Nelson as the Vice President is good, should’ve got more screen-space. Nick Nolte as Mike’s father is surprisingly good.

Ric Roman Waugh, from frame one, makes sure the movie never finds the right track. I tried watching it with utmost patience, hoping for some sudden good twist and never got one. Ric tries to mirror what’s already been done and fails at that too. But, even with the good direction, the lousy script couldn’t have been saved.

David Buckley’s music has nothing to be appreciated. Don’t remember a single sound piece that was worth mentioning.

All said and done, don’t fall for this trap for the third time in the row. The franchise started on a good note, but since then it’s churning disappointments with every part. Not even recommended on a lazy Sunday, when you’ve nothing to do.

Share with us your experience of watching Angel Has Fallen Movie .

The post Angel Has Fallen Movie Review: Officially, My ‘Interest Has Fallen’ From This Franchise! appeared first on Koimoi.