The Angry Birds Movie 2 Review: Just Fails To 'Quack' You Up!

The Angry Birds Movie 2 Review: Just Fails To ‘Quack’ You Up!

What’s Good: Few funny sequences here and there, it gives me a chance to put in some bird puns without any ‘egrets’.

What’s Bad: A forced try of carrying forward the franchise which started on a fluke!

Loo Break: More than quite a few!

Watch or Not?: It Required A Better ‘Tweetment’, so can totally skip

The sequel picks it up from where the original ended. Red (voiced by Jason Sudeikis) is everyone’s hero now. He even has giant hoardings of his face (and body of course!). The initial 15-20 minutes are, literally, wasted developing an unnecessary ‘frenemy’ vibe between the birds and the pigs. The ‘Ice Journey’ starts in the second half of the film, when it’s too late to bother about. Now, Pigs & Birds are in danger from a certain Eagle Island’s leader Zeta.

Zeta is pretty bored with her ‘icy island’ named ‘Eagle Island’ of course. I mean, the movie is for kids, and what do you expect after Bird Island and Piggy Island? So, Zeta has a shady past with ‘The Mighty Eagle’ (voiced by ‘The Imp’ Peter Dinklage) from the prequel, and now she wants to capture both, Bird & Piggy Islands. Red teams up with his buddies Chuck (voiced by Josh Gad), Bomb (voiced by Danny McBride), finding a love interest in Silver (voiced by Rachel Bloom). The trio with the help of Leonard The Pig (voiced by Bill Hader) get into the mission mode and what happened next, we all know it. 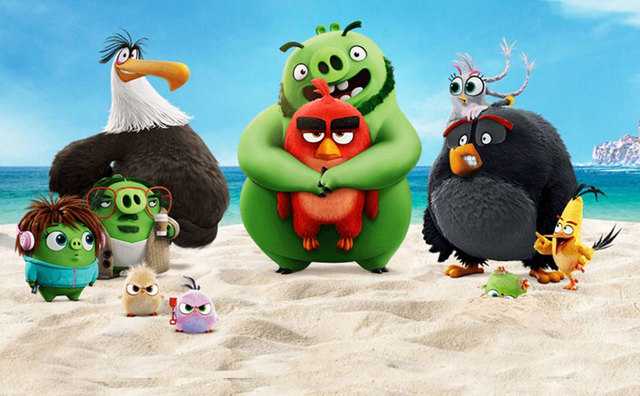 Despite not being a fan of the prequel, the script here outrightly loses the charm of part 1. Picking up from a smartphone game wasn’t enough for the makers, they decided to build this into a franchise. The prequel at least had some moments to cherish for, plus it was backed by a motive. The motive of Red saving the eggs, and turning to a hero for all. Part 2 lacks good script, as it keeps dragging the main plot until it becomes too boring to enjoy.

After a point of time, from the inclusion of the Mighty Eagle, Zeta angle to the needless love story of Red and Silver, everything is forced. If you watch it, even from a kid’s perspective, there’s nothing to enjoy. Skipping the story part, there are just two scenes (washroom one, in which team Red tries to steal the ID card and a breakdance battle of the Eagles) which I mildly enjoyed. Yes, it had its trademarked puns like Silver (the bird) saying “lovebirds? no, we’re just friend birds” or someone asking “Do you smell bacon?” when a Pig was exposed to heat. This is what was required in a large quantity and went missing.

The modification in Red’s character is the biggest turn-off of the film. It just sinks the cynicism down the flush, trying to make him what he’s not. Part 1 had enough of the meat for him, giving the heartless character a heart. But, this time, it’s just the other way round, a good hearty character is ruined turning it a boring one. Jason Sudeikis does well with the voice and modulations.

Even Josh Gad’s Chuck and Danny McBride’s Bomb’s contribution to bringing in the comical relief has been decreased comparatively low. Both of them, along with Terence, shared many funny moments in part 1.
Rachel Bloom’s Silver and Leslie Jones’ are painful addition to the narrative. Peter Dinklage’s Mighty Eagle is wasted as he was in the prequel.

Thurop Van Orman just doesn’t get the world of Angry Birds right. It’s not just the story that’s not subpar but the direction, too, lacks the zing. The animation continues to be top-notch but it’s not entertaining enough to keep you hooked.

Apart from all the minuses, the biggest flaw this movie is its music. Part 1 had such clever use of music; from Black Sabbath’s Paranoid to Limp Bixit’s Behind Blue Eyes, the prequel was melodious. I neither remember a single good song from this one, nor the sound design leaves any mark.

All said and done, it could be enjoyed for what it is – nothing. It just ruins whatever little appreciation accumulated from the predecessor. Tries hard to be funny, fails miserably.
Skip it!

Share with us your experience of watching The Angry Birds Movie 2.

The post The Angry Birds Movie 2 Review: Just Fails To ‘Quack’ You Up! appeared first on Koimoi.