Army Of The Dead Movie Review: Zack Snyder Grabs The White Walkers From Game Of Thrones Shifting Them To Mad Max!

What’s Good: This is a world you must’ve been to before, but Snyder’s vision keeps you intrigued with too many surprises

What’s Bad: It does what it promises & that’s what makes this a predictable affair at junctures

Watch or Not?: It’s fun if you’re okay with a massive amount of bloodshed

An organisation in Las Vegas addressed as ‘Mothership’ deploys a cargo of something ‘unknown’ from Area 51 protected by the army, but it collides into a car in which a guy is shown getting a blowj*b by his recently married fiance (just Zack Snyder things). The unknown cargo is an on-steroid zombie who kills the army and turns them into… yes, you guessed it right… blood-sucking, weird-walking, disgustingly-snarling monsters. They attack Las Vegas turning the whole city into Zombieland.

A casino owner Bly Tanaka (Hiroyuki Sanada), offers a mercenary, survivor Scott Ward (Dave Bautista), to go back to the Zombieland and get USD 250 Million, offering him a massive chunk from it. Scott hunts his ‘army of the dead’ with those who have survived the zombie attack in Las Vegas. He gets a muscle-man, a nerd locksmith, a hopeless pilot, a hot lady for the romantic angle and his daughter for the emotional arc. They all get together, go in there, tackle various types of zombies, but how many of them will come back? That’s the story! 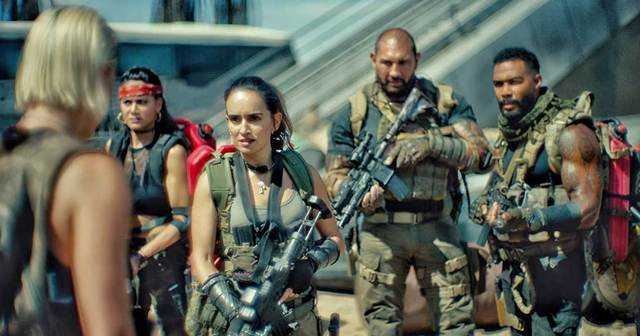 This is Zack Snyder’s idea of Zombie-Dothraki leading an army of White-Walkers but in the world of Mad Max. Sounds heavy, right? Feels heavy, too, due to the dragged duration of around 148 minutes. Snyder basically mashes every Zombie movie ever in his story but still manages to create an incredibly cool byproduct. The basic plot is sneakily similar to Yeon Sang-ho’s Peninsula (Train To Busan’s sequel), but Synder makes sure to fill this with a whole lot of gore at every scene possible.

We’ve been abusing Zombies for years to make the apocalypse stories cooler, but are we done with them yet? Well, hell no! Zombies will always be cool & this is Snyder’s way of showing how he envisions them. These aren’t your routine all-are-same zombies, and they’ve groups – Shamblers & Alphas. They have a king (a zombie Khal Drogo) and a queen (nope, not Khaleesi). Snyder’s zombies hibernate; they make a disgusting baby-zombie only April from Parks & Recreation would love. That and Snyder’s screenplay with Shay Hatten, Joby Harold’s makes this one stand out of the many similar films we’ve seen. The screenplay gloriously designs the world of these uber-cool creatures ruling an abandoned kingdom, and yes, some portions will remind you of the Mad Max template.

The pregnant zombies didn’t shock me as much as knowing the movie’s cinematographer is Zack Snyder HIMSELF. This is the first time he’s handling a camera for a feature film, and not for a second, it felt like that. Directors being a DOP of their own films? I mean, this is the guy responsible for restoring fans’ hopes in DC; he could do it.

Apart from a very dark treatment (so dark that it will deteriorate your watching experience if you are in a well-lit room), the cinematography catches your attention, keeping you intrigued even for the monotonous sequences. Snyder brings back one of the Justice League’s editors, Dody Dorn, to cut out the dough keeping juicy parts. The 150-minute timeline here feels dragged than the 240 minutes the director-editor duo asked for Justice League.

Dave Bautista is too lazy for something like this. This was so much in the ballpark for someone like Dwayne Johnson or even a Vin Diesel, Jason Statham, Will Smith. I tried with a positive approach of considering the ‘laidback attitude’ as his character trait, but no use. He looks too uninterested for someone to carry such a mega-project. Ella Purnell as Scott’s kid Kate successfully fills the emotional void viewers would have with the father-daughter pair.

Omari Hardwick’s Vanderohe becomes interesting in getting paired with Matthias Schweighöfer’s Dieter. The banter & friendship between them remains to be the only funny part (apart from an easy-peasy-Japanesy joke). Ana de la Reguera subtly matches the ‘goth’ elements in her character Maria. A delightful Huma Qureshi’s Geeta falls under the knife of poor character writing, serving nothing to hold, and the same goes for Nora Arnezeder’s Lily. 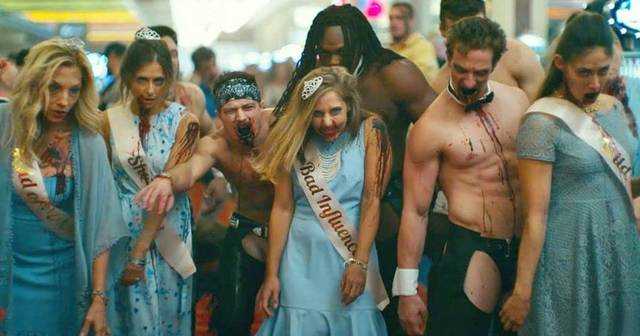 This is a perfect route for Zack Snyder to take after Justice League because it’s unlike anything he has attempted before. He sticks to the traditional formula but also adds his quirks like showing a zombie tiger which looks disturbingly awesome.

He adds the humour, but it’s not enough. When he chose to go R-Rated (showing women running topless for just one scene), why not turn this into a madcap adult zomedy with all the elements you already have? I understand the ‘serious’ approach, but even their it lacks to shed any light on the social commentary. Snyder tucks this into a very safe zone which shouldn’t have been the case. The film ends with an open ending and a hope that Snyder will finally go all-out in the next one (involving Mexico).

It’s a hat-trick of dope soundtracks for Junkie XL, aka Tom Holkenborg, this year; it started with Justice League: Snyder Cut, continued with Godzilla vs Kong, and here we go again with this one. He brings in Richard Cheese & Allison Crowe to perform Elvis Presley’s Viva Las Vegas; he uses Zombie by The Cranberries to add a thudding background score.

Army Of The Dead Movie Review: The Last Word

All said and done; Zack Snyder packs all things old and many things new in this visually appealing & full-of-gore zombie drama. There’s something for everyone & it could’ve been a blast of a watch on an IMAX screen. A bro-tip: Watch this madness on the biggest screen possible!

Army Of The Dead Trailer

Share with us your experience of watching Army Of The Dead. Taylor Swift Considering To Marry Joe Alwyn After Growing Closer During The Quarantine? 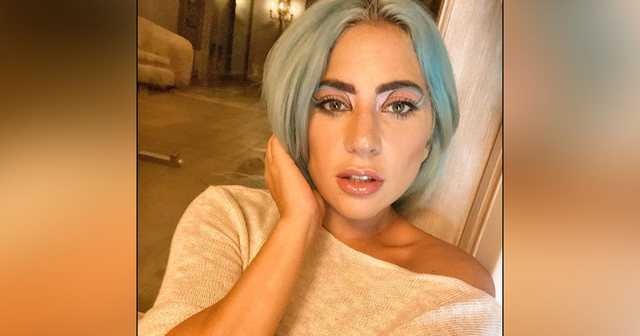 Lady Gaga Reveals The Painful S*xual Assualt She Faced At 19: “First I Felt Full-On Pain, Then I Went Numb”

Must Read: Prince Harry Reveals The Pain He Went Through After Princess Diana’s Death: “I Was Willing To Take Drugs”

The post Army Of The Dead Movie Review: Zack Snyder Grabs The White Walkers From Game Of Thrones Shifting Them To Mad Max! appeared first on Koimoi.