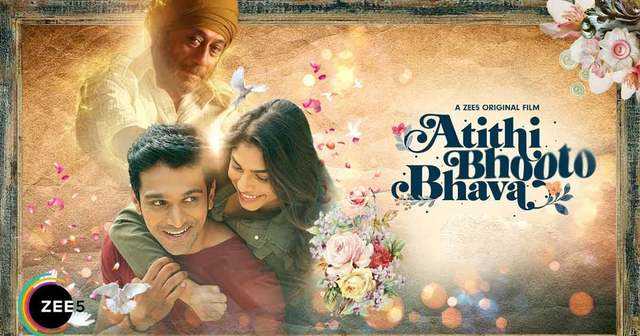 Atithi Bhooto Bhava Movie Review: Scam 1992? This Is The Biggest Scam Pratik Gandhi Has Been A Part Of!

What’s Good: Umm, the intent of its makers to create a film because everything post that goes downhill! (Also another silver lining is, it’s releasing on OTT)

Loo Break: At any given point in the story you can go, have a pee, come back & change the streaming platform to watch something else instead

Watch or Not?: If you’ve 114 minutes to kill, stare at the ceiling to have a more productive time

Pratik Gandhi‘s ‘Srikant’ (aka Sri) is an annoying a**hole who has taken his 4-year-relationship with Sharmin Segal’s ‘Netra’ for granted & roams around like he’s Ricky Gervais’ Tony from After Life. Sri is a standup comedian, and Netra is an air hostess (only and only to support one joke) & they both can neither fly away from each other nor laugh all out.

After fighting for some non-existent (just like the story of this film) issues, Sri decides to drink extra ending up seeing a ghost who introduces himself as his grandson Makhan Singh (Jackie Shroff). Yep, Sri meets his grandson from the previous life as a ghost who wants to reunite with his old love Manju & with this wants to teach his grandad how pure love is. 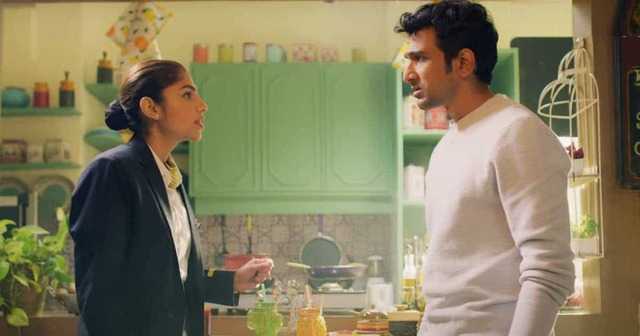 If you’ve two characters: one is young & dumb, another is old & wise, you use your elderly character to narrate his love story from the past to make the lad realise what is missing in life without love, you might create one of the most loved rom-coms of our era with Love Aaj Kal. But, if you’re someone who takes the above equation, and makes the old guy not only a ghost but also the young guy’s grandson from previous his life to make the lad understand the same thing, then my friend, you should stop your chain of thought right there and cross-check if you’re thinking straight.

But, that didn’t happen and here we are getting such a story from Shreyes Anil Lowlekar, Pradeep Srivastava and Aniket Wakchaure which lacks ‘Love, Aaj & Kal’. The story doesn’t get absurd by every minute, it gets all weird at once & then it carries on to be the same till the last minute without any revival. Madhu Vannier’s camerawork follows every basic trick in the book to keep things simple, which isn’t a bad thing at all amid all the chaos that’s happening in the story & execution department.

Back in 2020, Pratik Gandhi caught everyone’s attention by doing the biggest scam of his life (Scam 1992) & cut to 2022, he’s at the receiving end of what should be called as the biggest cinematic scam when it comes to stealing entertainment. This is exactly what happens with talented actors like him, in the start, when they decide to make their presence felt in the industry without really being much there (in terms of quality content). This should have been a no-go for someone as good as him from the scripting stage itself. He still chose to do it, tried & failed.

It’s always good to see Jackie Shroff doing movies & being a livewire at the age of 65, but projects like this don’t fit in the blueprint of how would he really want to treat his second innings to be. Rishi Kapoor did that brilliantly & I feel Jackie dada should observe the same following films which would only bring out the best in him.

Post Malaal, I had great hopes from Sharmin Segal but this film doesn’t even come close to what she could do. Her debut teased her calibre, wanted her to exponentially blow it up in her second film but neah, this ain’t that. Divinaa Thackur lends her hand which ain’t really helpful in the supporting cast. Blame it on the script because all the above actors could do very well when placed in a good film. The story started with its lead Sri flaunting his ‘MCP’ traits & then the director Hardik Gajjar tried to give the film a Seinfeld-like vibe with its central character being a comedian who does stand-up pieces about his life & I was totally up with the idea until I realised there’s ‘Bhooto’ (from the title) yet to be introduced. Hardik’s direction isn’t really much of a problem compared to the mess made by the story department. With his skills, Hardik can supervise a good film but not with this kind of script.

All said and done, the makers thought this would be a fun experimental horredy, but it’s neither fun nor experimenting with anything horror or comedy. A lame & easy-to-avoid attempt!

Share with us your experience of watching Atithi Bhooto Bhava. The post Atithi Bhooto Bhava Movie Review: Scam 1992? This Is The Biggest Scam Pratik Gandhi Has Been A Part Of! appeared first on Koimoi.