What’s Good: In a film dipped deep in patriotism if you find the villain worthy, then I don’t think if that’s a good or a bad thing

What’s Bad: The hope that makers might also come with Commando 4

Loo Break: If you can’t see Vidyut doing the action or Gulshan not being eccentric on screen, leave for a break!

Watch or Not?: Have you liked both the initial instalments? Totally rush for this one. If not, re-watch War & Saaho.

The story starts with a provocative speech by a masked man who’s planning an attack on India. Then we see some people from Mumbra (Mumbai) try to create a chaotic situation by slaughtering a cow for the beef. Then we see school girls getting molested by some wrestlers. Why am I telling you all this? Because that’s what we see before Karan (Vidyut Jammwal) entered to actually start the film (or that’s what I thought so).

So, Karan flies off to London with Bhavana (Adah Sharma) and meets Mallika (Angira Dhar) along with some stereotypical techie nerd. Teaming up they’re looking for Buraq (Gulshan Devaiah), who apparently is planning the attack on India. We all know the drill ahead, will they find him? Will they prevent the attack happening in the country? Will the movie end up with an emotional speech followed by a promotional song? Guess we’ve seen enough such movies to answer these. 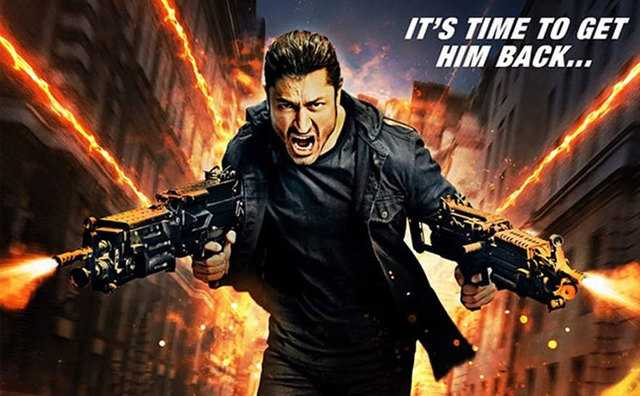 The base of the story is laid properly, characters introductions keep you intrigued but the film lags behind at the most important juncture – mission execution. Makers have tried to reform Vidyut’s action as we can see him fighting with car’s wipers, a pehelwan’s Mugdar, anything and everything that comes to his hands.

The only issue is Mark Hamilton’s cinematography fails to do any justice to Vidyut’s moves. In a similar zone, Tiger Shroff’s room-action scene in War was so beautifully shot. There is a scene which could have changed my entire stance for the slow 2nd half, in which we see Vidyut confronting Gulshan and that’s royally wasted. The climax might work in the single screens but apart from a few good actions scenes, there’s nothing to feed the multiplexes.

The only thing that separates Vidyut Jammwal from Tiger Shroff is his script sense. He’s where he’s today because of he’s a flexible beast & he can nail every action sequence you throw at him. The problem arises when the script demands him to act. As explained in the script analysis section above, the majority of his combat sequences are wasted.

From when I saw this film’s trailer, I knew the villain in Gulshan Devaiah will emerge as the hero for me & that’s what happened. From donning those lose clothes to speaking with that English accent, Gulshan carries the eccentricity of Buraq with style.

Also could the makers please stop making Adah Sharma speak with a Hyderabadi accent? Because she can’t. Angira Dhar is unidimensional & survived the entire film with a couple of expressions. Both the ladies have some good action sequences but that doesn’t serve any purpose to the story.

Aditya Datt has given us Table No 21, which was intriguing throughout from frame 1 but here he just messes everything up, or he just doesn’t organise anything at all. He follows the done-to-death formula which does no good to the viewers. He chooses to sprinkle patriotism in every other scene which emerges as cringe. Datt tumbles while walking on a thin line between delivering a stylish action flick adding masala to it.

Good thing is, there are not many songs in the film. The initial song Tera Baap Aaya is a fast-paced prototype of a regular Raftaar song. Sukhwinder’s Irade Kar Buland is a good song but its placement lessens the impact. Saurabh Bhalerao’s background score is good in the emotional sequence but he can’t match up the pace in the action ones.

All said and done, Commando 3 serves what it promises but only in the first half. Post interval, the movie takes a jingoistic route and falls flat with the development of the story. One can watch it for Vidyut’s action, but then we have already seen that in all of his films.