Crawl Movie Review Rating: 3.5/5 Stars (Three and a half stars)

What’s Good: Throughout the film, it never ‘tries’ to scare you, everything just comes naturally and that’s where the film stands out

What’s Bad: There were many areas untouched as far as the script goes, could’ve been turned into a classic!

Loo Break: Only if you’re someone who can’t watch horror flicks, then it’ll come naturally to you!

Watch or Not?: It all boils down to your taste, love this genre? Don’t dare to miss this!

Set in Florida, the disaster in this disaster-horror is the Category 5 Hurricane which is storming over the city. Haley Keller (Kaya Scodelario), despite the warning from the local police, moves to her father Dave’s (Barry Pepper) house to save him. She leaves her dog upstairs and goes underneath the house to look for her father. Amidst a working radio, and a 20-foot-long Alligator, she finds Dave wounded and unconscious.

She’s able to wake him up, but it gets difficult to find a way through multiple alligators who have made their way from the lake. The entire story revolves around the survival of the father, daughter and the dog. It’s not just the house that’s been covered, we see various other attempts taken by Haley to lead us almost feeling a lump in our throats. 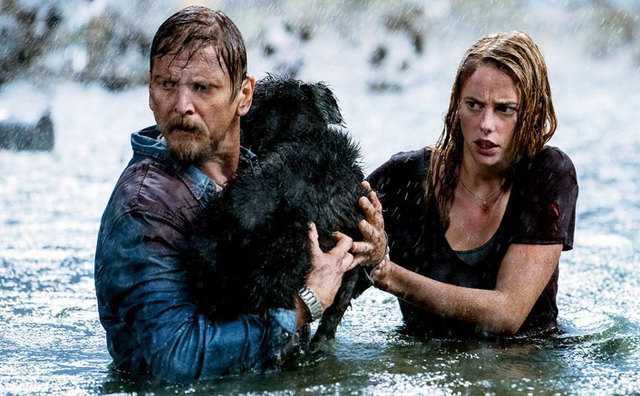 The brilliant transition happens in the movie from you getting scared with the lead characters, to get scared for them. That’s what a disaster movie should do, and Crawl portrays it with all the suspense. There are enough thrills that will not just keep you on the edge of your seats, but also give many ‘no no no’ moments.

I wish the makers could’ve cleverly used the dog to create more tension. The unilluminated production design helps to evoke the required fear. Thanks to the writers for bringing in natural causes to bring in the jitters, was really bored with supernatural beings. From disaster to horror to slasher, the script touches many aspects in order to retain that intrigue. Also, the angle of exploring things between father-daughter amidst the disaster moulded very well for me.

Kaya Scoledario delivers a remarkable performance as Haley. She knows how to emote every expression very well. Especially, when the camera zooms to her face and she’s scared, you get scared for her. She also performs the underwater, athletic scenes effortlessly.

Barry Pepper provides outstanding support to Kaya. He has worked with her in Maze Runner: The Scorch Trials, but back then no one thought they can be paired up for such a wonderful father-daughter. Apart from these 2, there are just decent CGI-made alligators having much screen presence in the film.

Alexandre Aja, with pretty much experience in this genre, brings a fresh concept on-board. This could easily turn out to be this year’s Don’t Breathe. Alexandre shows, how when you get home don’t spook it with supernatural beings, chaotic background score and try to do something logical. Maxime Alexandre’s camera covers almost everything that should’ve been used to bring out the screams.

Max Aruj and Steffen Thum bring out the best from the silence. Thank god they didn’t choose the typical loud Hollywood’s way of designing the sounds in a horror film. The sounds blend in well with the narrative, helping it to create the required tension.

All said and done, this is the kind of horror movie we deserve! A proper amalgamation of thrills and story, resulting in an exhilarating watching experience. If you can digest it, go for it!