Irul Movie Review: Fahadh Faasil & Darshana Rajendran Put Their Best Foot Forward In A Film Suffering From 'Been There Seen That' Syndrome

What’s Good: you must have already read Fahadh Faasil here, but it’s my duty to tell you how amazing Darshana and him are. Also, the film’s power to hold the suspense and intrigue even when the plot gets predictable.

What’s Bad: some plot holes that leave you with the feeling, why? Also, the aforementioned predictability.

Loo Break: certainly not. Even if there is predictability, Fahadh, Darshana, the cinematographer and the editor do not let you lose attention.

Watch or Not?: there are Fahadh and Darshana joining forces, yet again. Do you need any more reason to not miss it?

A couple, Alex (Soubin) & Archana (Darshana), decide to go on a no phone trip, bored with their routine life. In the middle of a deserted road in the middle of nowhere, their car breaks down. They see the light from a mansion nearby and decide to seek help. Enters a stranger (Fahadh). The events unfold, some unexpected twists happen, and now we are busy figuring out who the serial killer is. Story by Sunil Yadav, who is also credited for primary screenplay and dialogues, is not a trajectory that we haven’t already seen. For that matter, to begin with, the blueprint of the film draws parallels from Ram Gopal Varma’s gut-wrenching Kaun..?. On top of that, the inception of a good day turning to evil with a car breaking down in a no man’s land, a house the looks doomed welcoming them in, is something we have seen multiple times in the same genre.

Then what really works in Naseef Yusuf Izuddin directed saga that keeps the audience hooked? The suspense of it all. Like Sriram Raghavan’s Andhadhun, Irul also manages to give ego massage to our crime/suspense genre intellect and does show everything that we predict in the first half. The bad revealing itself, the good turning to bad, a mystery in the basement, everything.

Once that is done, and you are out of assumptions to make, Naseef, who has also written the screenplay, tells you to get on board for his ride. The mad game begins in the second half. Naseef, though, with a runtime of just 90 minutes, takes his own pace to set the base. And that actually helps, but also makes it an ‘already been there seen that’ treat in parts.

But every time predictability takes over, Naseef and Sunil skilfully induce a sequence so cutthroat that you forgive them instantly. It seems like they are aware that these series of things are not new for their audience, but they need to show it because their story needs to be taken ahead. For, e.g., a conversation between the three where they discuss Alex’s novel is a treat. Glimpses of which are also present in the trailer.

What held me back was the decisions the makers take for Soubin Shahir’s Alex. Now I don’t want to give any spoilers, but the twist that he headlines in the course of the suspense seems bizarre and of no use when the climax unfolds. He claims somethings to be his, but that is turned upside down, and you are left with a ‘why’ again.

I have ran out of words to describe the immaculate talents Fahadh Faasil & Darshana Rajendran are. Soubin too, but this time he did not create the impact expected out of him.

Fahadh’s stranger is a character that undergoes the maximum change in shades, and the actor does that with ease that only he is capable of. Darshana’s Archana is the viewer in here. It is her perspective we are watching this film from and she is as clueless and confused as we are. She manages to being the perfect thrills and questions we have and emotes them in the most perfect way.

Soubin Shahir though manages to be his amazing self in the scenes he is on the high note. The low ones restrict him, almost looking like he is stuck. Every single time the three begin talking in the single frame, I was waiting for magic, and it happened majority of the times. 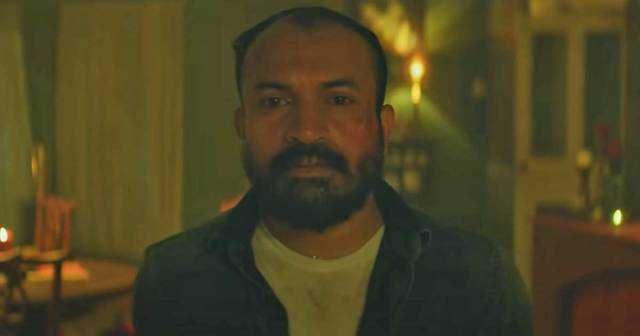 To choose such a subject to make a debut with is director Naseef Yusuf Izuddin’s bravery. It isn’t easy to master a suspense thriller that is so crisp and isolated. There are just three characters that to in isolation of a mansion. The focus is always on the pivotal without the liberty of shifting them on the supporting for breathers. Naseef manages to do an amazing job at this.

Particularly a scene where the three are figuring out the killer amid them, and talking at the same time creating chaos, is directed, shot, edited and acted so well. And there are a few more of these. DOP Jomon T John makes darkness his weapon and plays with the lights that he wants to. He makes you aware of the scarcity of light in this universe and how.

Watch out for the last few minutes before the climax takes place. A rainy night, with light over-shadowing the characters, one resenting his decision, the other dominating the both, while the third just gazes at oblivion in shock. Rain is washing off the three, and a melancholic symphony breaks in like a blast. I can’t explain the chills it triggered in those few minutes.

Irul means darkness, and the team manages to drive the point home pretty well. If you are an audience for murder mysteries also doubling up as psychological thrillers, this one is your game. And as said, Fahadh, Darshana and Soubin are already reasons enough. Predictability will hold you back, but you can give this one a chance.

Must Read: Drishyam 2 Movie Review: Mohanlal’s Guide To Spoil The Recall Value Of A Perfect Thriller With Its Sequel

The post Irul Movie Review: Fahadh Faasil & Darshana Rajendran Put Their Best Foot Forward In A Film Suffering From ‘Been There Seen That’ Syndrome appeared first on Koimoi.