What’s Good: Seema Pahwa understands the fabric of a family & has an impeccable eye for detail.

What’s Bad: Some lose ends but then Pahwa makes up for them with her characters.

Watch Or Not: You must watch this one. Seema Pahwa apart from being a brilliant actor, is also a powerhouse writer. I bet you will see your family in here. Also hasn’t that cast already excited you enough?

Ramprasad (Pahwa’s mentor Naseeruddin Shah) breathes his last suddenly and his family of almost 20 is left under one roof until ‘tehrvi’ (thirteenth day post the demise). The nuclear family marinates in the dust of the past and indulges in some spats, politics and grief is side-lined.

PS: The person writing this review is coping up with the loss of a family member. The film spoke to me 10 levels higher. Musician Brian Molko once said, “the more personal you make something, the more universal it becomes”. We are all made of the same emotions, and Pahwa pulls the trigger aptly. Ramprasad Ki Tehrvi is what happens after the family loses someone of importance. How long do you grieve, and how much is too much.

My introduction to Seema Pahwa was as an actor. I find myself unlucky to not have witnessed her off-stage work (which has been in theatre more) after indulging into this film. Ramprasad Ki Tehrvi is an adaptation of a play Pind Daan also written and directed by Pahwa. And it is quite visible that it was made for a stage.

The closest a film has ever gotten to portray the complexities of a family has been Shakun Batra’s flawless Kapoor & Sons. Ramprasad Ki Tehrvi makes it that list. As already said the film is the purest understanding of the fabric of a family. Be it urban or rural, the emotions after a loss remain the same. Pahwa stages the story in a house that has witnessed the history of the people gathered in there. It in itself is a character. Ramprasad’s six children are reunited, and they are as grey as real humans, including you and me, are.

Having reflected her real-life experiences, Pahwa as a writer and director do not go the cinematic way of over dramatisations or spoon-feeding music. This is a story we all have witnessed or lived majorly. What shines here is the screenplay. It is written in a stage format where characters enter and exit, and you can see the three-act structure. But what impressed me the most is the fact that she gives screentime and weightage to every person/thing that enters the frame. This also can be her effort to pay homage to the numerous supporting actors, herself being one for the longest time.

This can clearly turn out to be a Seema Pahwa appreciation post, and I am unapologetic about it. The attention to detail here is God level. Be it mansion they live in, or the clothes, the dialogues, dialects and the body language, everything is pitch-perfect. When you see people trying to prove their prominence at public gatherings (funeral), the closest to the dead being asked the same questions, this is all we have seen and lived at least once and connects us to the story instantly.

What Seema Pahwa as a writer suffers is the thought “what if people don’t understand the metaphor?”. Due to this, she sometimes oversimplifies things. While the flashbacks to childhood are adorable, they also become explanations. Refer to Gulabo Sitabo when Juhi Chaturvedi embodied the haveli in Mirza (Amitabh Bachchan), there wasn’t a flashback. Still, you could imagine what the place looked like in its glory days. Ramprasad Ki Tehrvi opens up to a house, and you can instantly imagine that here too, but it is oversimplified later. Having said that, the story has a beating heart, and I can ignore a few flaws for that.

Seema Pahwa gets the ‘Nazar Naa Lage’ cast. Look at the cast section and figure out why I say so. Supriya Pathak, who plays Ramprasad’s wife, is enough to hold this kingdom together. For a character that doesn’t speak her emotions much, Pathak talks with her eyes. Watch out for her when she realises that her near ones are not actually grieving the loss; she is a treat.

Manoj Pahwa, Vinay Pathak, Ninad Kamat, Parambrata Chattopadhyay, Deepika Amin are actors who have crossed the point where they need my validation. Special mention to Konkona Sen Sharma and Vikrant Massey who get the best story arcs. While Vikrant’s isn’t explored completely, he sells it and I bought it. Sharma does what she does best here.

There is a lot of situational humour and each and every cast member aces it. 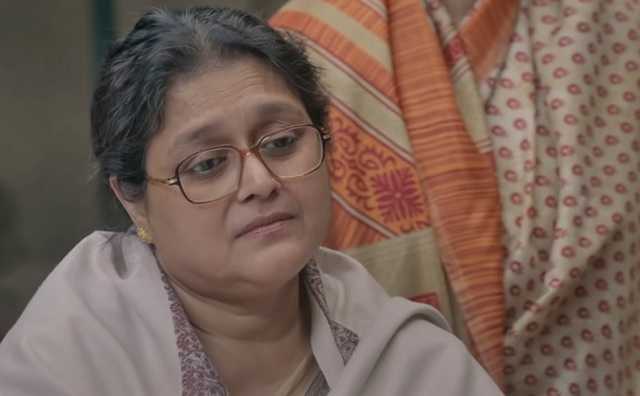 Trust me, I still have a lot to say about Seema Pahwa’s work. I haven’t seen Pind Daan, so will not be able to say if this is a point to point replication. Ramprasad Ki Tehrvi depends a lot on the director. There are almost 20 people in the frame sometimes, for someone setting the frame, what to focus on is the biggest challenge. Transition being the second. In her debut, she does not let this look like an amateur’s work.

Music by Sagar Desai is the cherry on the cake. Bulawa Aya Re and Ek Adhoora Kaam are tracks that deserve recognition. Sudip Sengupta’s camera makes us all one of their relatives as we eavesdrop conversations and incidents. Parijat Poddar’s production design elevates all of this.

We have seen weddings and what goes around them. Here’s a funeral and the tug of war that goes around it. Seema Pahwa in her directorial debut is finding her voice and addressing a substantial conversation. I am in to see her make more of these. The climax does become a little preachy, but the journey is cathartic. This is a Tehrvi you should not be missing.

Share with us your experience of watching Ramprasad Ki Tehrvi. AK vs AK Movie Review: Anil Kapoor & Anurag Kashyap’s Reel-Meets-Real Is The Most Experimental Experiment To Happen In Bollywood!