War Movie Review: Yet Another Addition To – 'Not Every Good Looking Movie Is A Good Movie'

War Movie Review: Yet Another Addition To – ‘Not Every Good Looking Movie Is A Good Movie’

What’s Good: Hrithik’s style & Tiger’s action – the two out the four pillars of the film, rest of the two – story & dialogues are sadly hollow

What’s Bad: Depends on what are you watching this movie for, if you’re watching it for a good story then your bad, if not then mine!

Loo Break: When Tiger isn’t performing any stunts & when Hrithik isn’t setting up the screen on fire with his presence

Watch or Not?: Only if you’re craving to watch good locales & action on a big screen, keep your expectations limited

As the trailer suggested, War is a story about an agent, from Indian Intelligence, named Kabir (Hrithik Roshan) going rogue for the reasons best known to him. His protege Khalid (Tiger Shroff) gets the mission of shooting Kabir on the spot. A flashback takes us two years ago from the present day to build up the bromance between Kabir & Khalid. There it’s revealed that Khalid is the son of a traitor who was killed by Kabir.

Khalid joins the intelligence just to clean up the mess his father created for his family. He gets into the team with Kabir, earns his respect by fighting some bad guys and taking a bullet for him (that’s a must). This brings us back to the present day in this forced non-linear storyline. Khalid has to find Kabir who’s killing some major Government employees, and ask him why he’s doing all this. Why is he doing all this? Your guess is as good as the predictable twists in the movie. 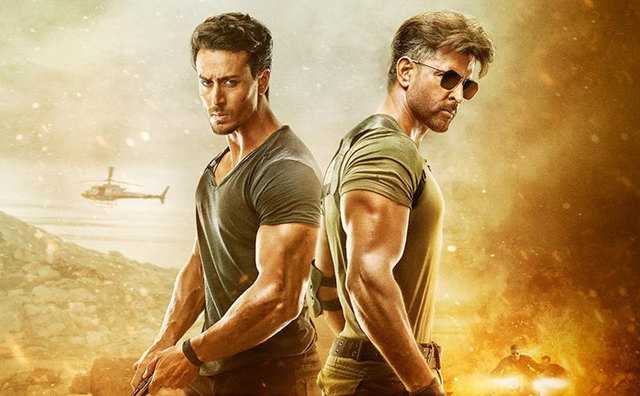 I don’t understand if you’re getting 100s of crores to make a movie, how hard it is to put a solid script on the place? War suffers from a similar loop of ‘what the audience wants to see’ and ‘what kind of films makers are creating’. If the creators will keep on creating ordinary scripts laced with style, the audience will have to settle on the mediocre content. It’s in the times when we have talents waiting to get explode. I know it’s not a child’s game to scale a film on such a huge scale, but I also know our audience deserves way better than this.

When you’re calling the film a ‘war‘, why to show bromance between the leads? You either pit them against each other without any mercy or call the movie as ‘War’n’err’ Brothers. Not comparing, but the story of this year’s Hobbs & Shaw is miles ahead and that’s how you treat a bromance. If you’re hanging on a thin thread at the scripting level, at least make sure to have some punchy dialogues. But, Abbas Tyrewala’s lines are satisfactory at the best. If you remove the BGM from some scenes, you’ll see how this is a love story between Hrithik and Tiger.

Hrithik Roshan is, without any doubt, the most good-looking guy in Bollywood right now. He’s stylish, he’s confident and has a different aura around him in this film. From his walk to the way he winks, Hrithik is very convincing in his role.

He is brilliantly aided by Tiger Shroff, and we all already know how good he’s at the action sequences. But, still, he surprises with those moves and will garner many ‘oh wows’. As far as acting is concerned, it’s as usual pretty ordinary but a step ahead is always good.

Vaani Kapoor’s role is as short as Shahid Afridi’s contribution to the 2011 Cricket World Cup. She’s doing Trapeze and lazy dancing despite being such an energetic dancer, that’s where the makers’ vision lacks. Ashutosh Rana is wasted as a supporting character. He gets no scope to display his acting skills.

Siddharth Anand does this second time in a row after Bang Bang! Mind-blowing locales, brilliant action, superlative cast but no story. No major complaints with Siddharth Anand as the director, because the blame is on Siddharth Anand the writer. I loved the bridging shots he has used to build an impact. But nothing stays with you because of the ordinary narrative.

Background score by Sanchit Balhara and Ankit Balhara is a perfect mix of mass and class. It goes extremely well with the action scenes pumping up the required adrenaline rush. I just wonder why not many makers are considered Balhara brothers for background score? They’re gems waiting to be explored. Jai Jai Shiv Shankar is a delight to watch on screen, whereas Ghungroo is good just because of Vaani’s presence.

All said and done, War is a timepass watch and nothing more than that. Hollywood feeds us such movies on a regular basis & if you just want to see how Bollywood has achieved that, go for it. Watch it for the action & style because there’s nothing else to look up to.

The post War Movie Review: Yet Another Addition To – ‘Not Every Good Looking Movie Is A Good Movie’ appeared first on Koimoi.