This bacon-wrapped pork tenderloin is one of those miracle recipes that just happens to only require 4 ingredients: pork, bacon, honey and olive oil. Just sear the pork, then roll up in bacon, drizzle with honey and bake. It’s easy as one-two-three (four)! 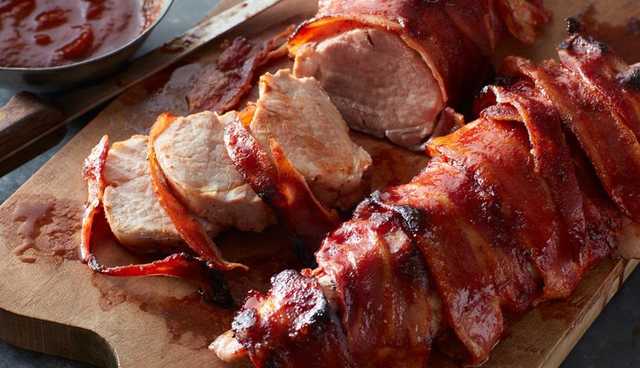 - Lay out bacon: Lay the bacon strips vertically on a board, slightly overlapping (see photo in post). There should be enough bacon so when rolled will wrap the length of the pork.

- Season the pork with salt and pepper. Tuck the thin end of the fillet under so the pork is roughly the same thickness from end to end.

- Brown pork: Heat the oil in an oven-proof skillet over high heat. Sear the pork on all sides until nicely browned. (Don't worry about cooking through, it will go in the oven.) Turn off heat, remove pork and allow to cool enough to handle.

- Wrap pork in bacon: Place pork on the arranged bacon at the end closest to you. Use a long knife to lift the bacon under the pork and roll the pork so the bacon wraps around the fillet. Finish with the bacon seam side down.

- Honey: Use the knife to transfer back into the skillet. Drizzle over honey and brush all over.

- Bake 25 minutes: Transfer skillet to oven for 25 minutes and roast pork until the internal temperature is 65°C / 149°F. Baste with pan juices at the 20 minute mark, mopping up plenty of the honey and juices pooled in the pan (this will make bacon deep golden).

- Rest 5 minutes: Remove from oven and let it rest for 5 minutes. Baste once more just before serving. To serve, cut into thick slices. Serve with remaining pan juices.