A spicy, tangy potato filling along with some raw onions, pomegranate kernels and spicy peanuts filled into soft buns called as pav along with tamarind chutney and garlic chutney and drizzled with shev is what this flavor bursting dabeli is made up of.

You will find many street vendors in India selling this delicious snack, especially in the evening time. 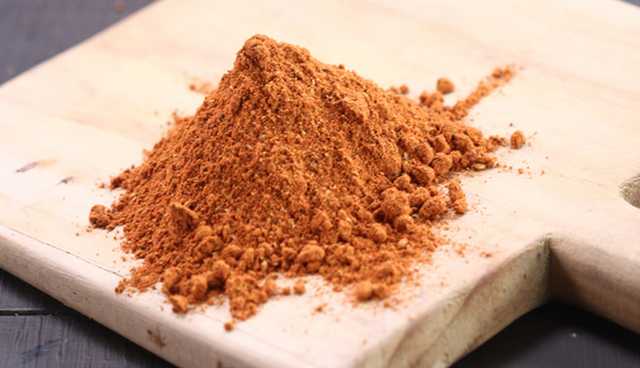 - In a broad non-stick pan heat oil. When oil is heated add the dabeli masala mixture and saute it for a minute stirring continuously.

- Add mashed potatoes, salt & red chilly powder and mix well. Add a cup of water and let the potatoes cook in masala till water dries out little. Keep on stirring continuously. We do not want very dry potato filling or very watery filling for this preparation. Potatoes should be moist enough.

- Once the mixture is cooked, transfer it to a broad plate and with the help of spatula or back side of spoon spread the mixture evenly. Keep aside to cool.

- Now when you are ready to start preparing the dabeli, sprinkle scrapped coconut, finely chopped coriander leaves & pomegranate kernels over the potatoes mixture.

- Slit the pav in between, half way through.

- Apply garlic chutney and tamarind dates chutney on both sides of pav.

- Take a heap spoonful of potato filling and stuff it between the pav, top it with finely chopped onion, little masala or salted peanut & nylon sev.

- Repeat this procedure with all the remaining pav.

- Now heat tava (skillet). Once skillet is hot add a tsp of butter and place the pav over it. Apply little butter on top side of the pav also.

- Roast the pav on one side for 2-3 minutes on low flame till the base gets little crisp. Now flip and let the top side of pav get little crisp.

- Once dabeli is warm enough and crisp transfer it to a plate & dip the edges in nylon shev.