5 Hotels in Rajasthan To Give You King Like Feel

The princely state of Rajasthan has always been known for its magnificent forts and opulent palaces that were built in the times of Maharajas. While today, most of the palaces have been converted into heritage hotels and resorts, they still retain and showcase the grandeur of the Rajputana architecture and hospitality. Needless to say, these heritage resorts surpass all the bounds of luxury and offer a royal stay that you might have never even imagined in your lives. So, if you are planning a holiday in Rajasthan and looking out for some exclusive options for a luxury stay here, do check out for the following heritage resorts that stand as a pride of this state of Maharajas.

A five-star Taj Heritage Resort, ‘Umaid Bhawan Palace’ is an epitome of luxury, magnificence and opulence. That is the reason, this heritage hotel has also been awarded with the honour of ‘World’s Best Hotel’ at the ‘Traveller’s Choice Award’, organized by TripAdvisor in April 2016.Built in 1943, the palace is set amidst 26 acres of lush gardens and a part of it, still serves as a residence to the royal family of Jodhpur. The breath-taking beauty of the palace, made using the golden-yellow sandstone and Makrana marble, takes you in its complete awe as soon as you set your eyes on it; its sheer size and grandeur is magical enough to hypnotize you fully. Exquisite interiors, decked up in art-deco style, complete with beautiful murals, antique furnishings and elaborate carvings on walls and pillars, also add to the royal charm of the palace. 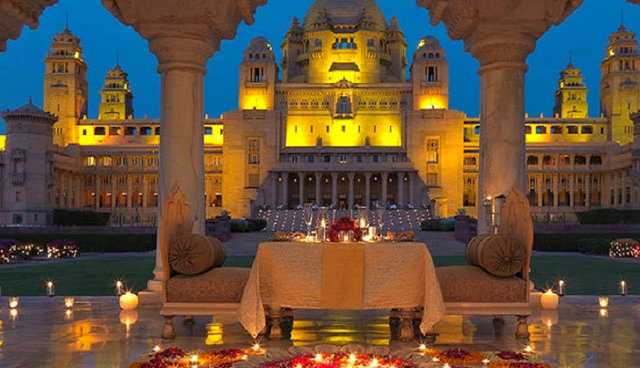 Considered to be one of the most luxurious and expensive hotels not only in Rajasthan and India, but, all across the world, the ‘Rambagh Palace’ is a jewel of Jaipur and undoubtedly, a glittering gem in the crown of Taj Group of Hotels. You would be amazed to know that this palace finds its place amongst the esteemed early few of the opulent Indian palaces that were converted into heritage hotels in order to preserve their Rajputana legacy.Steeped in ultimate luxury, royalty and richness, a stay at this heritage hotel makes for a delicious icing on the cake of your luxury holidays in India. Built in mid-19th century, the palace once served as the official residence for the Maharaja of Jaipur, Sawai Mansingh II and his beautiful queen Gayatri Devi. Today, this royal heaven provides for an indulgent getaway to rich travellers and businessmen from different corners of the globe, seeking to experience the magnificent Indian hospitality at its best; needless to say, it is one place in the world where even your thoughts are taken care of.

The magnificent ‘Taj Lake Palace’ of Udaipur is yet another of the most famous luxury retreats in Rajasthan. Nestled in the heart of beautiful ‘Lake Pichola’ and flanked by majestic Aravalli Hills, the palace was built in 1746 by Maharana Jagat Singh II and was then called as ‘Jag Niwas’. Entirely constructed from pure white marble and adorned with elaborately carved pillars, inlaid floorings and exquisite terrace gardens lined up with beautiful fountains; the palace was an architectural marvel of its times. After the death of Maharana Jagat Singh II, the palace continued to serve as a summer resort for his successors. Later, in second half of the 19th century, weather and time took its toll on this extraordinary palace and it was left abandoned to decay and deteriorate. It was during 1960’s when Maharana Bhagwat Singh, the then ruler of Udaipur decided to restore the palace to its pristine glory by converting it in a luxury palace hotel. In 1971, the palace was taken over by the Taj Group of Hotels and since then, it has lured thousands of national and international tourists wanting to feel and experience the royal hospitality of Rajasthan. 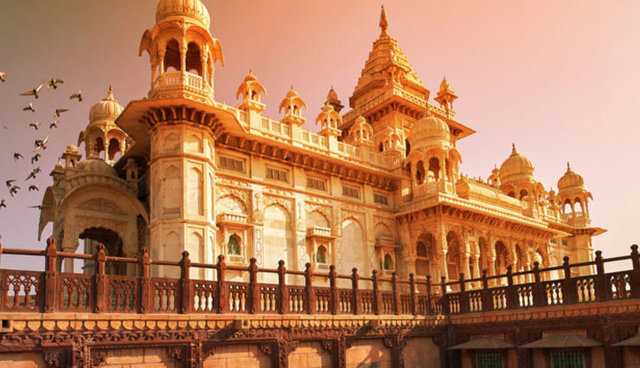 Spread out in a complete fort setting with pink stone facades, lush gardens criss-crossed with onion-domed pavilions, reflection pools and fountains, the ‘Oberoi Rajvilas’ takes royalty and magnificence to an absolutely new level. The interiors of the palace are as splendid as the exquisite exteriors, exuding vibes of richness and grandeur from every corner; the luxury guest rooms feature unique blend of Mughal and Colonial touches with Italian white marble floorings, four-poster beds, finely crafted furniture and latticed window panels. The luxury tents emanate their own royal charm and feature timber floorings, elegant hand-embroidered silk fabric with block prints – a signature Rajasthani art and a private patio with comfortable lounge beds; one can have an absolute relaxing time here amidst serene beauty of nature, sighting numerous colourful birds and even peacocks.

Spread across a sprawling 50 acres of land that once served as hunting grounds for the Maharana of Mewar, ‘The Oberoi Udaivilas’ captivates all the onlookers with its crème-coloured façade and intricate layout of domes that can be seen looming over the sparkling Pichola Lake in Udaipur. Historic and romantic settings of this magnificent hotel, combined with all modern day comforts of life, makes it one of the dream resorts for many travellers and vacationers. Its regal architecture complete with beautifully manicured lawns dotted with vibrant flowers that often invite peacocks, exotic dining spaces emanating the charm of splendid Mewar architecture, an ornate swimming pool and a world class spa; no wonders ‘The Oberoi Udaivilas’ has been aptly described as a ‘royal retreat’ by almost all its guests.