Sarus Crane (Antigone antigone) is the tallest of the flying birds found in parts of the Indian Subcontinent. The non migratory crane bird is an iconic species of shallow wetlands and marshes of India, mostly found on the lowlands along the Gangetic plains of Uttar Pradesh and in larger wetlands of Gujarat, Rajasthan, West Bengal and Assam.

Sarus Crane is the state bird of Uttar Pradesh and the habitat also include Punjab, Haryana, Gujarat and Madhya Pradesh. The agricultural fields and wetlands of eastern Uttar Pradesh are home to largest number of Sarus Crane in India. 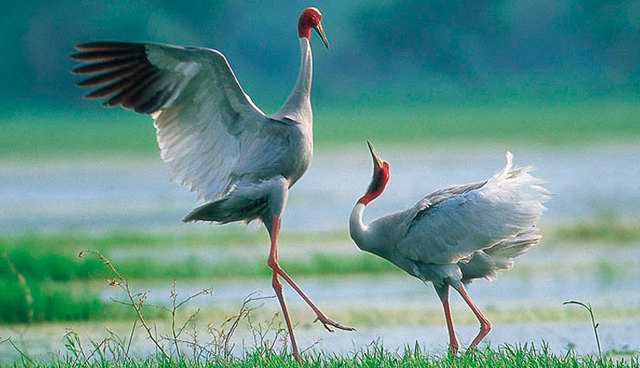 Keoladeo National Park was known as the Bharatpur Bird Sanctuary and also a World Heritage Site in India. The wetlands of Bharatpur is a famous avifauna sanctuary and one of the richest bird areas in India.

Sultanpur National Park near Gurgaon is located 50 km from Delhi and a very popular Bird Sanctuary of Haryana state. This Bird Sanctuary is wintering home to large number of migratory birds such as Siberian crane and local Sarus Crane. 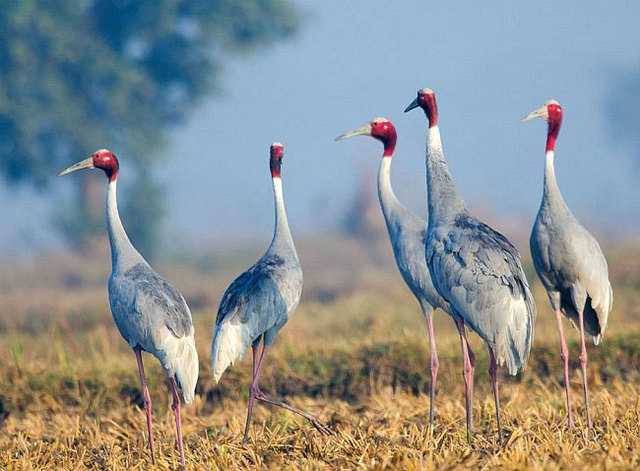 Thol Bird Sanctuary is a fresh water lake and habitat of many migratory birds species. The wetlands and marshes of Thol Lake is very good habitat for waterfowl along with most prominent of species include greater flamingo (Phoenicopterus roseus), great white pelicans,mallards and Sarus cranes (Grus antigone).

Maharana Pratap Sagar or Pong Dam Reservoir in Kangra district of Himachal Pradesh is a well known birdlife sanctuary of India. The wetland sites declared as the Ramsar Convention and home to large species of waterfowl diversity along with migratory birds as well as local species reported are barheaded geese,ruddy shelduck, northern pintail and Sarus Crane.