6 Most Popular Places To Visit in Bangalore

Bangalore is a combination of old complexly designed landmarks and modern architectural wonders and one should not miss exploring this place. Bangalore is popular as the silicon valley of India as it was a huge hub of IT companies. During early times, it was fondly known as the “Garden City of India” because of the lush greenery and vegetation it covers.

The quaint temples, energetic shops, quirky cafes, a large stretch of trees and gardens, a diversified and dynamic mix of people, art galleries and culture, cultural dance forms, and the Carnatic music melodies all are responsible for making Bangalore a cosmopolitan city. When you are in the city, you can come across the close by attractions like Mysore, Ooty, Coorg, and much more and do a combined trip of these delighted areas.

This city can serve as the perfect base to wander around the state of Karnataka and spend a great time in your life. Below are given some of the best places to explore in Bangalore. Lal Bagh Botanical Garden covers 240 acres of area showcasing more than 1854 kinds of medicinal and scientific trees and plants. This place is considered the topmost destination among other places in Bangalore.

The park was ordered and declared by Hyder Ali and his son Tipu Sultan in 1760 and this huge stretch of greenery covers a 3000 million years rock which is known as ‘the Lal Bagh rock’ which is attracted by many travelers.

It also contains a glasshouse including a lake and an aquarium and also an energetic annual flower show. The presence of a varied collection of birds like Parakeets, Brahminy Kite, Myna, Purple Moorhen, Pond Heron, and Common Egret, and much more wins the hearts of many birdwatchers and photographers. The Cubbon Park looks like a green belt space covering over 300 acres of land housing 6000 kinds of trees resulting in the rich flora of the region. Inside the premises of the park, there are amazing spots like Attara Kacheri, the bamboo grove nook, Cubbon Park Museum, Dancing Fountain, Ringwood Circle, and many more.

It serves as a second house for morning joggers and nature lovers. If you are planning to explore the whole park but not on foot, then you can make use of a toy train to tour around this park. Cubbon Park is one of the best tourist spots in Bangalore where you can relax by sitting under the green foliage and spend magical hours observing the sky. 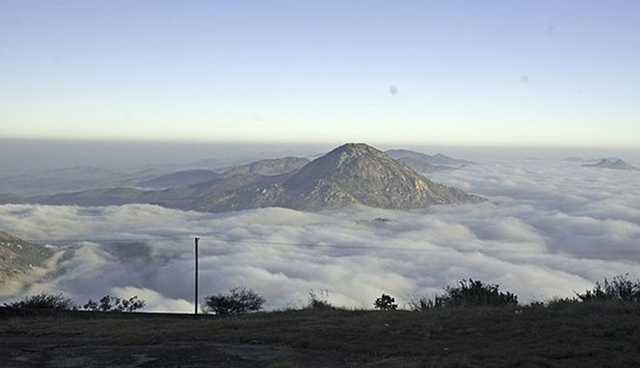 Nandi Hills is awe-inspiring hillocks which is a full nature retreat. From cycling to paragliding into the striking mount till Yoganandeeshwara Temple that is placed on top of the hill with a massive Nandi monument, these tiny heaps have much to offer even if the hill’s name was invented after the temple statue.

They are small hillocks and serves as a perfect trekking spot for visitors. People are much attracted to this place because of the rich flora and fauna and beautiful vistas of the surrounding areas.

One must be careful while trekking across the paved roads, small streams, grasslands, and rocky terrain to reach atop the hills. While trekking, you will come across hordes of monkeys accompanying you, therefore it is advised not to keep eatables with you. 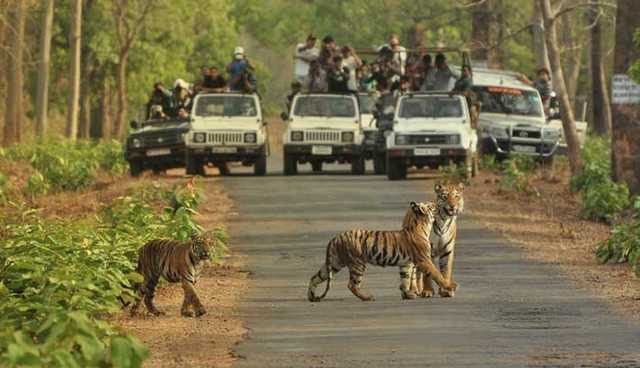 It is one of the best places to explore in Bangalore for natural establishments, rich vegetation, and assorted wildlife. One can board a bus or hire cars and jeeps for touring across this huge national park.

The park consists of great establishments like a lovely butterfly park covering colorful varieties of butterflies, a Children’s park, an aquarium, a crocodile farm, a museum, Snake Park, and a Prehistoric Animal’s Park which is much liked by many tourists.

The flora and fauna of this park contain sandalwood, neem, eucalyptus, tamarind, etc. in plants and spotted deer, wild boar, elephants, jackal, porcupine, etc. in animals. Besides a natural retreat, it also contains many locations for a short trekking expedition and some of them are Mirza Hill, Hajjamana Kallu, and Uddigebande. Bangalore Palace is a real illustration of sheer architectural wonder erected in 1873. It is held on an area of 25000 sq ft exhibiting the regal blend of Scottish Gothic and Tudor architectural designs.

It is a reserved spot that hosts various events, marriage parties, and rock concerts. It houses paintings of the popular painter of the ancient period Raja Ravi Varma including old carvings and ceramic and granite tiles of the floor are much astonishing. The vast ground in front of the palace hosts many foreign artists of past times like the Backstreet Boys, the Rolling Stones, Lamb of God, Elton John, Don Moen, Deep Purple, and so on.

During the festival of Dussehra, a grand fair is conducted in the ground in opposition to the royal background of the illuminated palace. 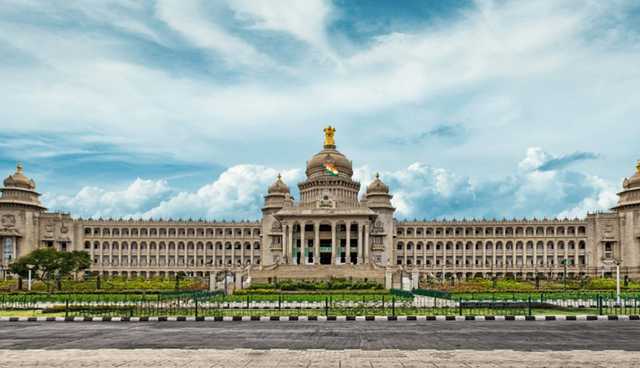 Vidhana Soudha, located in the heart of Bangalore, painted in white spreads across an area of 60 acres. It is a well-known landmark in the city which houses the state legislature and the state secretariat below one roof. It is a dome-like structure containing two chambers where on the first floor (central wing), 268 members can reside at one time and the southern wing provides a stay for 88 members.

The building is a great combination of British, Dravidian, and Indo-Islamic pattern architecture. One should not miss the illuminated building on Sunday evenings and the famous writing “Government work is God’s work”. It is one of the best sightseeing spots in Bangalore which requires prior permission or a pass today.

The splendor of Vidhana Soudha can be witnessed after sunset when the complete building is well illuminated and it looks like a grand palace.