8 Mouthwatering Mangalorean Cuisines You Must Try

Food is something that transcends time and space and even has the power to remind you of the past. There are many people, from celebrities to politicians, who come back to Mangalore just to remind themselves of their past by visiting their old hangouts and eating Mangalorean food. Mangalore cuisine is unique as there are many communities that call this coastal city home. Apart from Udupi, this is the only city where you will get to eat traditional Konkani, GSB, and Tuluva foods. Many people who have visited Mangalore have fallen in love with the food and crave for another taste long after they have returned. 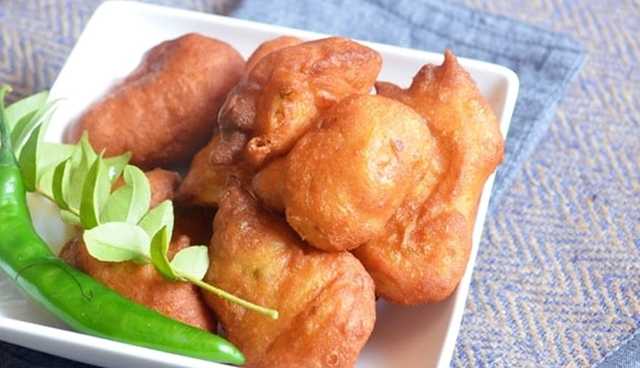 Goli bajje, also known as Mangalore bajji or Mangalore bonda is a snack synonymous with the city itself. A popular Mangalorean food item, goli baje is commonly eaten for breakfast or at tea-time and is available in almost all eateries in Mangalore. It’s also popular in Udupi, which is about 55 kilometres north of Mangalore city. This deep-fried Mangalore food is made mainly of maida (all-purpose flour), curd, as well as coriander leaves, curry leaves and green chillies to add savoury goodness. The batter is traditionally left to ferment anywhere from a few hours to overnight (baking soda is not used in this method). It is the fermentation that gives the goli baje a mild tangy flavour and keeps the end product light and fluffy. Baking soda is used to reduce the fermentation time. Mangalore bajji are light brown and crispy on the outside and light and fluffy on the inside and are generally served with coconut chutney or other spicy variety of chutney like tomato chutney, onion chutney or pudina/mint chutney, You can also eat them plain. In Mangalore, it is a must to try these soft and spongy fried delights to figure out why they are so irresistible.

Kori roti is another popular Mangalorean food. It’s a strange, yet delicious combination of fried wafers and spicy chicken curry. The rotis are basically rice paste spread thin on large tavas and heated till they become crispy. The spicy chicken curry, which is prepared with a red chilli base and coconut milk, is then poured over the rice wafers. The chicken curry, also known as kori ghassi, is creamy (because of the coconut milk) and spicy. The roti of this Tuluva dish was traditionally made by the women in the house. Now, however, you can find kori roti in almost all grocery stores in Mangalore. This popular Mangalorean dish, which is generally eaten for lunch, is available in all non-veg restaurants that serve Mangalorean food. This is one dish you absolutely must try at least once in your life, especially for lovers of chicken curry. Kori roti is versatile when it comes to pairings, if you are vegan or vegetarian you can always pair the roti with a vegetable gravy as eating it plain just isn’t as fun. If you love bhel puri, you will love the Mangalorean’s take on this street food. Churumuri or mandakki, like bhel puri, has puffed rice as its main ingredient. This popular Mangalorean food consists of cooked puffed rice, fresh vegetables, and spice powders. When it’s in season, you can also find bits of raw mango in this snack, which gives it a sour and tangy kick that is loved by so many. Like most Mangaloreans, you can make your churumuri at home and specialise it by adding other ingredients like groundnuts or sev or coriander leaves, and enjoy it with a cup of tea or coffee. Churumuri is mainly eaten as a snack and is popular street food in Mangalore. It’s also one of the main street foods found in the many beaches of this coastal city. It can also be found in chaat stalls in and around Mangalore. Snacking on it by the beach is a must. You must try it as the kick from the raw mangoes and the overall tanginess of this street food is incomparable. Additionally, this is also a great vegan option. 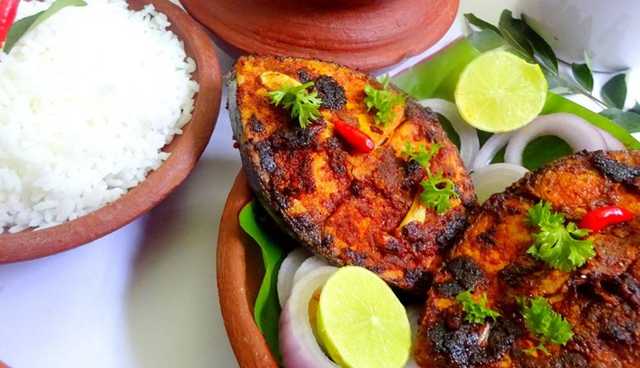 In Mangalore, seer fish, commonly known as kingfish, is a popular delicacy. Since Mangalore is a coastal city, this fish is available by the dozens in the markets on a daily basis. The fried variation of this expensive seafood item is known as anjal fry in Tulu and is quite popular amongst all Mangalorean dishes, eaten along with boiled rice, fish gravy and a vegetable side dish. While the quality and freshness of the fish play an important role, the taste mostly depends on masalas used to marinate the fish. The spicy masala in which the fish is coated is mainly made of red chillies, ginger, garlic, tamarind, and coriander seeds. It is found in most restaurants that serve seafood, however, the taste and quality may differ. Hotel Narayana and Giri Manja’s, both in Bunder, are among the best places in Mangalore to tuck into some well-made and delicious seer fish fry. A good thick slice of anjal fry will put you in a good mood any day and will make you crave for more. 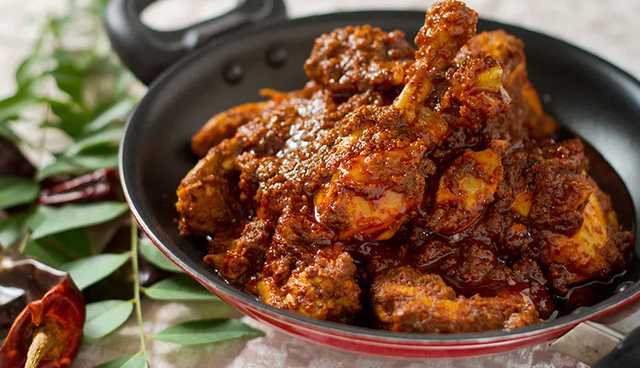 Ghee roast is a type of gravy masala in which you can cook anything from chicken to prawns, or even paneer. This is a popular Mangalorean food and the main ingredients are red chillies, spices roasted in lots of ghee, and other spices like curry leaves, pepper etc. The red chillies give the gravy a rich red colour and spicy heat, while the ghee and the roasted spices give the gravy its iconic fragrance. The richest and heaviest of Mangalore dishes, ghee roast is eaten mainly for lunch and/or dinner, quite often during get-togethers and other similar occasions. You have to try ghee roast of any variety to truly appreciate the genius behind this popular food item of Mangalore. The varieties include chicken ghee roast, which is the most popular and also has vegetarian and seafood varieties. Shetty Lunch Home, a restaurant in Mangalore that was founded in Kundapur (a town close to Udupi), claims to have created this rich and fragrant dish, and their chicken ghee roast is famous. This popular Mangalore food can be found in most non-veg restaurants in Mangalore, however, it is best to try this dish, especially the original chicken ghee roast, at the place that created it in the first place. 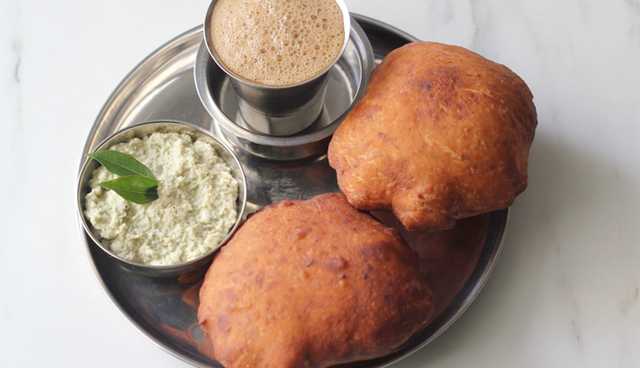 Mangalore buns are a popular Mangalorean food that is consumed either for breakfast or as an evening snack. This iconic part of Mangalore cuisine is made of a dough whose main component is over-ripe bananas along with some spices and is deep-fried. Like the goli baje, Mangalore buns are also traditionally fermented which helps the dough become soft and pliable. A common misconception is that Mangalore buns are an Indian version of the regular bun, but it is actually the Mangalorean spin on the north Indian bhatura. This delectable food item is thick, yet light, fluffy, fragrant and mildly sweet, and it is found in most restaurants in Mangalore. Just the aroma of the buns can make one’s mouth water. The bananas give the buns a mild sweetness. These buns are usually paired with coconut chutney and spicy sambar and can even be enjoyed with tea or coffee. They can also be eaten plain. In some places, these buns are served with potato palya or vegetable kurma. 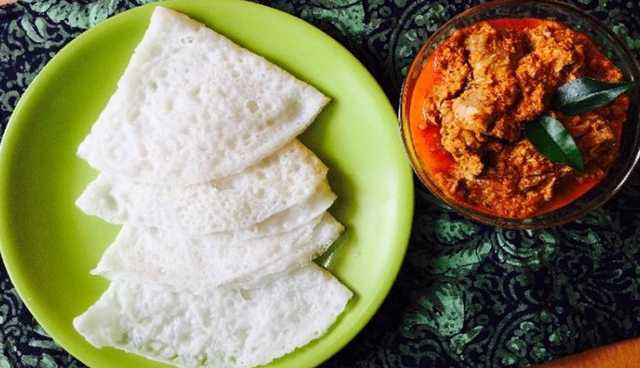 Everyone loves a good combo and there is no better combination for a Mangalorean than neer dosa and chicken (kori) sukka. Neer dosa (neer means water) is a rather watery batter made of ground rice, that is thinly spread over a hot pan and fried. It is the best and goes with anything. This is a dish from the Tuluva community is generally paired with many types of gravies or fish curry, however, the most iconic combination is with chicken or kori sukka. Kori sukka is a dry chicken dish from the Konkan coast, the masala of which contains grated coconut and a variety of spices like red chillies, tamarind etc. While neer dosa is also eaten as a breakfast item along with coconut milk or spicy coconut chutney, and kori sukka is also eaten with chapathi or boiled rice, the combination of the two is something extraordinary and must be tasted at least once in your lifetime. While neer dosa can be found in almost all restaurants, because it’s a vegetarian food item, chicken sukka is found in most non-vegetarian restaurants that serve Mangalore cuisine. Vegans and vegetarians can pair this dosa with coconut chutney or any gravy dish of their choice. 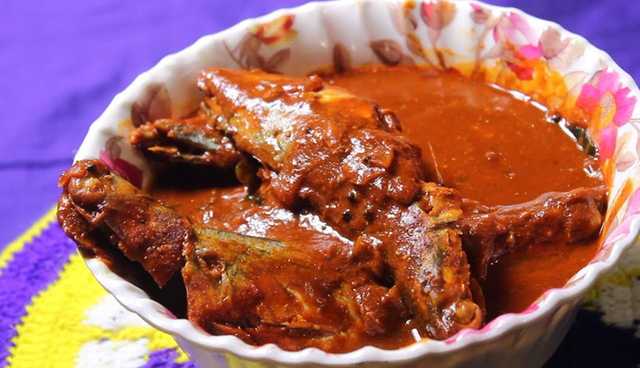 Bangude is Tulu for mackerel, while puli means tamarind and munchi means chilli. Among all the Mangalorean food, this is a unique dish as, true to its name, bangude pulimunchi is both tangy and spicy. Considering that Mangalore is a coastal city, mackerel is available here in plenty and it is used in many Mangalore dishes. Traditionally, this thick consistency curry consists of roasted spices, onions, garlic, and tamarind and is prepared in clay vessels which amplifies its earthy flavours. Bangude pulimunchi is typically served with steamed or boiled rice, however, it can also be paired with neer dosa. This spicy fish curry is available at most seafood restaurants in Mangalore and should be tried by those who can tolerate really spicy food.