Chants of ‘Ganpati Bappa Morya!!’ will soon fill the air of Mumbai. The 10-day festival is celebrated in a large scale in Mumbai and across the state of Maharashtra. During the festival, the idols of elephant God take residence in homes and pandals. The festival draws lakhs of devotees from across the country. From gorgeous pandals to street processions, the city comes to life even more during the festival of Ganesh Chaturthi. There are plenty of Ganesh pandals that are a must visit. In 2019, the 10-day festival begins on September 2 and ends on September 12.

On the occasion of Ganesh Chaturthi, we bring you 5 Ganesh pandals in Mumbai that are a must visit and how to reach there.

No wonder Lalbaughcha Raja tops the list when we say popular pandals in Mumbai. This year, the pandal will have a plastic crushing machine to spread awareness about the plastic ban. The pandal has donated Rs 25 lakh to the Chief Minister’s relief fund in order to help flood victims. According to reports, this year, Lalbaughcha Raja will have ‘Chandrayaan 2’ as the theme. Every year the pandal draws over 1.5 million devotees a day. The idol is believed to fulfill wishes. To get a glimpse of the favourite god there are two lines – a general line and the other ‘navas’ line. The navas line is for those devotees who wish to worship idol right near the idol’s feet, while the general line is a few meters away from the idol. 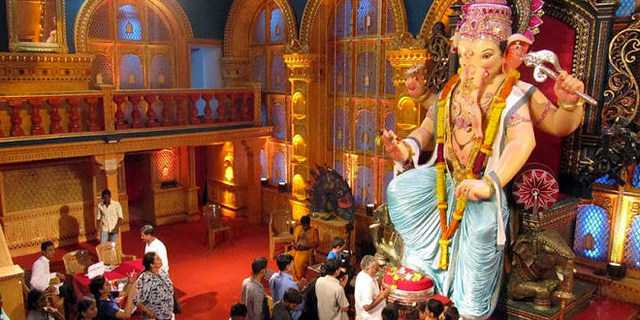 The Ganesh Galli cha Raja is said to be the actual Mumbai cha Raja. Founded in 1928, the pandal is few lanes away from the popular Lalbaug cha Raja. The pandal is known for its unique themes, often a replica of popular temples in India. In 2019, according to ANI, this year the pandal has decided to create an Ayodhya Nagari and build a 'Ram Temple'. The decorations and lightings are estimated to cost Rs 35 lakh.

How to reach: If you coming from Central Railway alight at Chinchpokli or Curry Road stations. If you prefer Western Railway alight at Lower Parel. Walking distance of 10 to 15 minutes from any mentioned railway stations. The pandal is close to Lalbaug cha Raja’s pandal.

Tejukaya cha Raja is another popular Ganesh pandal in Mumbai. It is said that the pandal derived its name ‘Tejukaya’ from a popular personality from the British era ‘Rao Bahadur Seth Shri Tejukaya J.P’, a civil contractor by profession. In 2019, the pandal will have a 22-feet papier-mache idol and clay, making it the tallest idol in Mumbai this year. The pandal will also have minimal decoration and lightning as a step to use the funds as an aid for flood-hit Kolhapur and Sangli.

How to visit: From Central railway alight at Currey Road or Chincpokli station. The pandal is at a 10-minute walking distance from the mentioned railway stations. 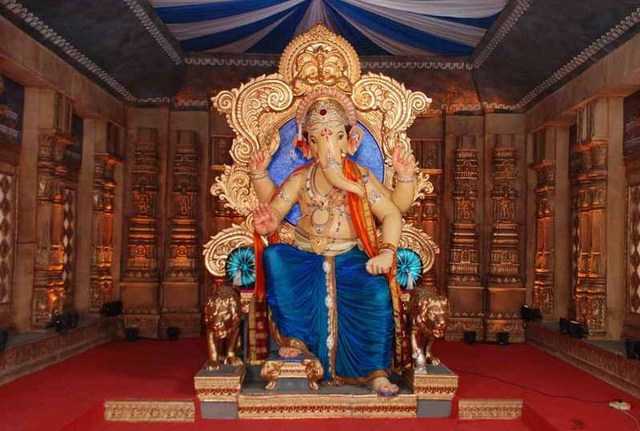 Established in 1959, Khetwadi cha Raja is among the oldest Ganesh pandals in Mumbai. The pandal rose to fame in 2000 after it made a 40 feet tall idol. In Khetwadi, there are 13 lanes and there’s a Ganesh pandal in almost every lane, but the pandal in the 12th lane is popular among all. Address: 12th Lane Kehetwadi, Girgaum

How to reach: Nearest stations are Charni Road and Sandhurst Road. Walking distance of 10 to 15 minutes or you can even take a cab from the mentioned railway stations.

Andheri cha Raja is often addressed as the Lalbaugh cha Raja of the Mumbai suburbs. The pandal was established in 1966 by the workers of Tata Special Steel and Excel Industries Ltd. The attraction every year is the beautiful pandal and theme. Andheri cha Raja is believed to be a wish-fulfilling idol. According to Mid-Day, for the Ganesh Chaturthi 2019 celebrations, the dhoti and shawl of Andheri Cha Raja is designed by Hollywood fashion designer Sai Suman.

How to reach: Alight at Andheri railway station. Take a metro and alight at Azad Nagar Station. The pandal is behind the Sports Complex.