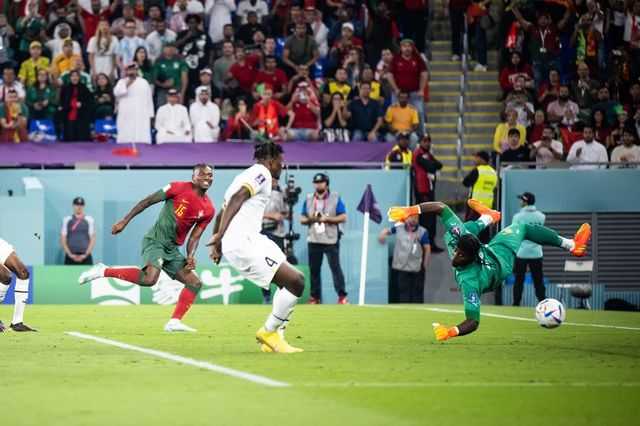 Cristiano Ronaldo scored in his first match since leaving Manchester United as Portugal defeated Ghana in a World Cup thriller on Thursday evening.

But there were plenty of other players for the Old Trafford faithful to take note of in Portugal's 3-2 victory, including Rafael Leao. The AC Milan forward came off the bench to score what proved to be the game's decisive goal in the 80th minute with a brilliant, sweeping finish into the far post.

The chance was created by Bruno Fernandes, who also set up Joao Felix minutes earlier, after Andre Ayew cancelled out Ronaldo's penalty-spot opener. The Fernandes-Leao connection might be something United fans hope to see more of in the Premier League, as the latter is on the Red Devils' transfer radar.

The 23-year-old is about to enter the final 18 months of his contract at San Siro, meaning suitors are beginning to circle. In mid-October, it emerged that United are among those keeping tabs on the situation and a bid of around £60million would convince Milan to sell up.

The Red Devils' need for a forward has only increased after they chose to terminate Ronaldo's contract this week, in the wake of his explosive interview with Piers Morgan. United were reluctant to let the wantaway striker depart in the summer, when he was pushing for an exit, amid fears this would leave them light of options in attack.

However, a matter of weeks before the January transfer window opens, they decided to cut their losses after the relationship between player and club reached an all-time low. Leao has certainly staked his claim to succeed Ronaldo at Old Trafford after proving he has a fine understanding with Fernandes.

Would you like to see Manchester United stump up £60million to sign Rafael Leao? Have your say in the comments!

His well-taken goal against Ghana was vital, as the Black Stars scored again in the 89th minute through Osman Bukari to push Portugal all the way before falling to a 3-2 defeat. At club level, Leao has been in brilliant form this season, scoring seven goals and assisting six times in 20 appearances.

The youngster's haul of 11 Serie A goals last campaign helped the Rossoneri win the league title for the first time in 11 years. United manager Erik ten Hag could sorely use a player of Leao's ability and work rate to regenerate his attack in the post-Ronaldo era.

After witnessing the former Lille prospect get off the mark for Portugal in style by combining with Fernandes, Old Trafford chiefs may be more keen than ever to pursue a bid for Leao in the January transfer window or next summer.