A "gutted" mum turned up at Manchester Airport excited for a long-awaited family trip to Turkey - only to learn their EasyJet flight had been cancelled.

Joanna Lovell was looking forward to the holiday with her two children, partner Jack and his son, her parents, sister, brother-in-law, and their two children.

After two years of delays the group arrived at Manchester Airport on Thursday morning for their long awaited trip, Yorkshire Live reports.

They managed to check in, went through security, enjoyed some pre-holiday food and drink, before arriving at the gate only to find their flight was cancelled.

EasyJet is reported to have now cancelled or delayed hundreds of flights due to an IT issue.

A statement from EasyJet earlier today, read: "Unfortunately, we are currently experiencing IT systems issues which means that flights due to depart between 13:00 and 15:00 UK time today may be impacted.

"Our team of IT specialists is working to restore the systems as soon as possible."

The issues fall on the back of Manchester Airport struggling for a number of weeks now due to staff shortage, leaving travellers frustrated and anxious with some even missing their flights as a result of it.

Joanna, founder of Lovell Films and a former Hull Daily Mail reporter, said she was due to fly from Manchester to Antalya at 1.35pm.

Seven hours later she told Yorkshire Live that she was still waiting to be told if she could go on her much-anticipated trip. 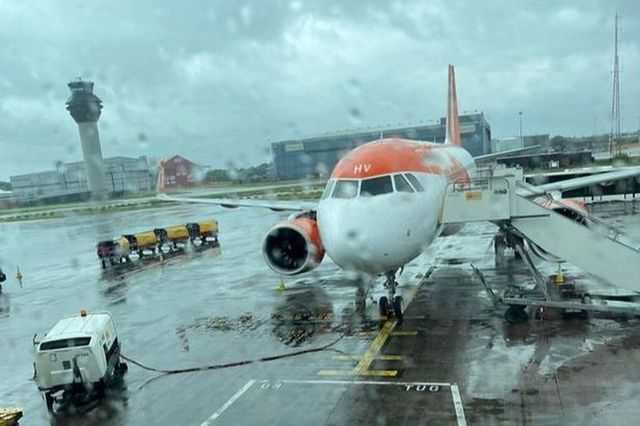 She said: "Our bags went on the plane then while we were queuing to board we saw them coming off, then the crew all came off so we were all speculating.

"We then we got an email from EasyJet saying it was cancelled. We were told 400 EasyJet flights between 1-3pm nationwide were cancelled.

"This was not long after we found out, with people trying to rebook flights and find out what was going on. There was no staff in sight, no help, and no one to talk to.

"I understand these things happen but families were left stranded.

"We were told for two hours we couldn't move, so we were sat in no man's land at the gate, just stranded."

The mum-of-two, who said the family were "gutted" when they heard about the cancellation, said she tried to speak to EasyJet staff members, but they too appeared to not know what was happening with the cancelled flight.

She added: "It was just the lack of explanation, we found out via an email when queuing to board. No announcement.

"One staff member I did collar said he's never known anything like it, he had no information but said all of a sudden they got a message saying 'do not fly'."

Passengers have been spotted at Manchester Airport crowding outside of gates, with many sitting on their bags due to lack of space.

Police were also seen at the airport attempting to control the "absolute chaos", Joanna added.

"Due to going through security we had to be escorted through arrivals and back through passport control to 're-enter' the country we hadn't left. Police had to be called in as you can imagine", she said.

"We're absolutely gutted! The holiday was cancelled due to Covid by a year, then we finally got through security, got right to boarding and then it was cancelled!

"I've never been to an airport, through security, had everything checked then walked out arrivals on the same day."