Kim Kardashian sent fans into a spin on Wednesday as she made a shock visit to her SKIMS pop-up shop in Los Angeles.

The newly-crowned billionaire, 40, wowed fans while she posed for pics in front of a giant SKIMS backdrop.

The reality TV star rocked up to the shop in an olive toned SKIMS bodysuit that complimented her complexion, which had been enhanced thanks to her family getaway to Palm Springs.

She matched it with a fetching pair of snakeskin trousers along with some open toed heels.

The mum-of-four seemed in high spirits during her appearance and could be seen getting her hair and makeup touched up in between each shot.

She offered fans a smile and a wave as she passed them while donning a nude shaded face mask.

Daughter of Demi Moore and Bruce Willis, Rumer Willis, took to Instagram to praise the Keeping Up With The Kardashians star's lastest pop-up shop. who went on to praise KIm's pop-up shop on her Instagram Story.

"@KIMKARDASHIAN THIS POP UP IS SO CUTE,'" she wrote as she shared a short clip of the items available in the store.

At the event, TMZ asked Kim who the next Kardashian-Jenner member would be to break into the billionaire club. The star boldly claimed they all will be in it soon.

Kim was named as a billionaire by Forbes thanks in large to her cosmetics and clothing interests as well as income from TV, endorsement deals and investments. 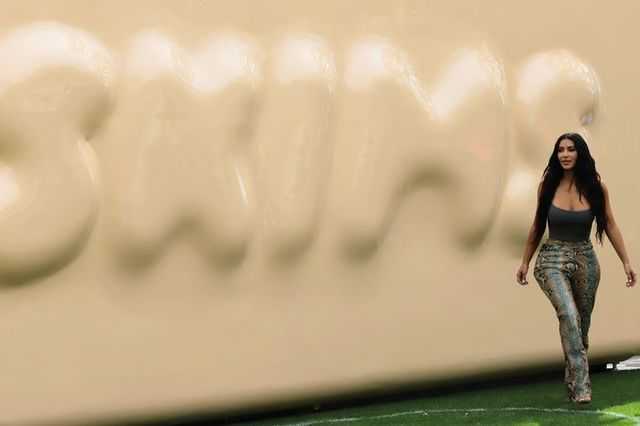 In a special article about the newly-single reality TV star Forbes reported that her fortune had jumped from $780 million (£562 million) in October to more than $1 billion (£700 million).

Her remaining stake in KKW Beauty is said to be worth around $500 million (£360 million).

Forbes also reports Kim's shapewear brand Skims has boosted her fortune thanks to a massive deal which valued the business at more than $500 million (£360 million).

Her majority stake in the business is said to be worth nearly $225 million (£163 million) helping her to rank among the world's richest people.