Nagpur: The brutal rape and murder of Dr Priyanka Reddy on the outskirts of Hyderabad has once again unleashed a trail of gloom, replete with anger and frustration in the nation’s nerve. The fairer sex community across India is again soaked in its worst fear of getting preyed at the hands of such insane monsters wandering in the dark fringes of city scapes in the human masks. Voice of angst and fury are turning loud and clear and the rage is evident.

Back in Nagpur, the social media is raging up with the recall of Akku Yadav’s lynching in Nagpur court on August 13, 2004. Many users are referring to the similar mode of action with the accused in latest case.

Akku Yadav was a 32-year-old rapist, extortionist, and accused murderer. Following a decade of criminal activity and rape allegations, a bail hearing was scheduled for Yadav on August 13, 2004 in Nagpur District Court, and word spread through the adjoining neighborhood that he would be released. Hundreds of women marched from the slums to the courthouse carrying vegetable knives and chili powder. When Akku Yadav appeared, he saw a woman whom he had raped and shouted that he would rape her again. The woman started hitting him with her sandal. 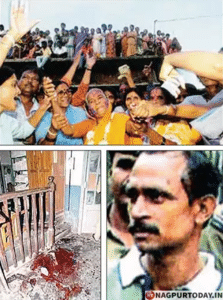 Yadav was then lynched by a mob of around 200 women from Kasturba Nagar, a slum of Nagpur.Yadav was stabbed over seventy times, and chili powder and stones were thrown in his face. One of his alleged victims also hacked off his penis. This lynching occurred in the Nagpur District Court No. 7 on the marble floor of the courtroom.

Cut to 2019 incident in which Dr Reddy has been victimized. The cries deeply inherit the same old question – how long will such tormentors exist to make life of innocent women worse than hell, or make them lifeless!

The deceased 26-year-old veterinary surgeon from Cyberabad, Telangana has become the latest face of vulnerability at the hands of nocturnal animals that survive beneath the so called civilized cover of the society.

The main accused Mohd Ali alias and his accomplices dragged the victim into the bushes and took turns in raping her. They later smothered her to death and dumped the body below a culvert in Chattanpalli.

The case has been referred to fast track court for speedy proceedings but before the Justice comes, and the proximity of the punishment is decided, the simmering fury among the enraged mob points to the pattern followed in Akku Yadav case.

While we at Nagpur Today doesn’t support such acts of taking law in hands, we equally push for stringent laws and severe punishments for the accused which should set a precedent before such evils and they should think 100 times before committing such heinous acts. However this has been said and repeated countless number of times and it’s high time, the judiciary must react before the people could ‘act’!