'Avengers Infinity War' saw the introduction of Thanos to the films. Powered with the Infinity Gauntlet, he destroyed half the universe by snapping his fingers.

However, in Marvel comics, Thanos, the Mad Titan has long been a feared character. Nonetheless, he has faced defeats in the hands of some strong and courageous Marvel characters.

We bring you, the five characters who have defeated Thanos. 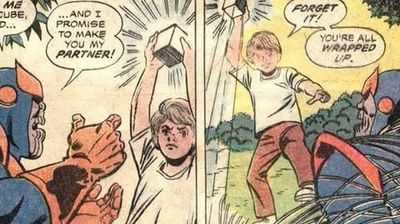 Anybody can be a hero
Jim


The most surprising entry on this list is not a superhero but a kid named Jim.

In Marvel's 1979 comic, Thanos fought Spider-Man and Hellcat. The mad Titan dropped the cosmic cube, which he intended to use on earth.

A bystander, Jim, picked it up.

Using the cube's power, Jim left Thanos wrapped up with grass for the police to apprehend.


Time to let the beast out
Hulk


Yes, fans can cheer. Hulk did defeat Thanos once.

'Infinity War' saw Hulk getting thrashed by Thanos and in comics too, the two have shared punches often with Thanos winning.

However, in 'Zombies 2 #1' where the universe was overcome by a zombie plague, Thanos suggested that Hulk was hoarding resources.

This ticked off Hulk who smashed his head with a single sucker punch.


Literally tearing the heart out
Drax


Drax and Thanos share a rough history over the murder of Drax's family.

However, in comics, Arthur's family was murdered by Thanos because they spotted his scouting ship.

Arthur's soul was put in a body created by Kronos, the father of Gods. Thus Drax the Destroyer was born.

In 'Annihilation #4', Drax ripped out the heart of Thanos after punching through his back. The villain who spelled doom for Thanos
Doctor Doom


Victor Von Doom or Doctor Doom is one of the most dangerous villains.

In 'Secret Wars #8' he became God Emperor Doom, the ruler of a planet, Battleworld.

When Thanos confronted him, trying to prove he still was the more dangerous villain, Doom gave Thanos a chance to make peace.

When Thanos refused, Doom ripped out the former's spine in a literal single-handed combat.


'Infinity War' ended with Nick Fury calling Captain Marvel for assistance as Thanos destroyed half the universe. The upcoming Avengers film will likely see a fight between them.

Despite the cosmic cube's power, Mar-vell defeats Thanos so badly, that even Death, his lover, becomes ashamed and leaves him.