'Ghoomketu' review: A senseless and unnecessary film
23 May 2020


Nawazuddin Siddiqui-starrer Ghoomketu (streaming now on ZEE5) is a film about films, writing, family, and the struggle that is typical to the city of Mumbai.

But it tragically gets too little of that right.

Perhaps, because it never quite touches upon these subjects, it rather merely uses them as props, but to no avail.

Here is our review of the Pushpendra Nath Misra directorial.


Ghoomketu (Nawazuddin) is a 31-year-old man-child from Mahona, a small town in Uttar Pradesh.

While he may be no-good for his family, Ghoomketu sincerely believes he can write.

He tries to get a job at a local tabloid, but is ridiculed by the editor as his only writing credits include slogans written on trucks, local wedding cards, and poems for political rallies.


The would-be writer runs off to Mumbai
Plot


Driven by his will to write and support from his aunt, Santo Bua (Ila Arun), Ghoomketu runs off to Mumbai to try his luck in Bollywood.

The family, back in UP, uses their political connections to bring him back.

Meanwhile, in Mumbai, a corrupt and lazy cop, Inspector Badlani (Anurag Kashyap) must find Ghoomketu in a month or face a transfer posting.


Too many characters, but no sense of connection
Details


There is a plethora of characters in Ghoomketu: the ultra short-tempered father, Dadda (Raghubir Yadav), the politician uncle, Guddan Chaha (Swanand Kirkire), Ghoomketu's wife who mistakenly got swapped at the wedding (Ragini Khanna).

All of them are unique and at least intriguing to begin with, but none written well enough to arouse any real sense of connection.

It's a sheer waste of brilliant actors. 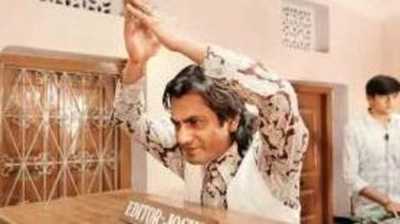 The writing is bumpy, the direction even worse
Details


Ghoomketu suffers the most from a scattered and utterly distracted storytelling. Even the setting shifts from Mumbai to UP too often and too abruptly.

It's as if three short films are running at the same time, and the viewer is assigned the arduous task of connecting them.

Put simply, the writing is bumpy and the execution perhaps even worse.


The film is self-referential, just not smart enough
Intention


But it would be unfair if we do not try and decipher the makers' intentions before discarding the film altogether.

Ghoomketu is apparently supposed to be a light-hearted ode to the Bollywood of the 70s. In fact, clips from old Hindi movies involving the likes of Bachchan and cameo appearances pop up every now and then.

It is pretty meta, just not smart enough.


For a comedy film, Ghoomketu makes you wait a great deal for the laughs.

Save for a couple of funny scenes, courtesy Nawazuddin's mesmerizing delivery, there isn't much to smile about.

Even the emotions feel staged up until a good length. And as and when the film does offer some emotional comfort, it is not enough.

Characters break the fourth wall, a little too often
Fact


In Ghoomketu, characters break the fourth wall and talk directly to you so often, you might feel as if you're watching a really uninteresting documentary. But that would still have been a better deal, as that would at least end sooner than a full-length feature.


Giving credit where it's due: Nawazuddin remains thoroughly dedicated even in a role and film as confusing as Ghoomketu.

He cracks poor jokes like, "Sir Khamba koi kaise laa sakta hai," and laughs uncontrollably at his own sense of humor, eventually making you smile as well.

But even his performances is far from making the movie bearable, let alone succeed.


Raghubir Yadav as Dadda and Ila Arun as Santo Bua come off as a respite.

They are a treat to watch not because their characters have a lot of meaning, but because that's how they have evolved as actors.

It is because these veterans now no longer depend on good scripts or films to prove their worth.

To watch or not to watch?
Final word


Ghoomketu is like that recipe with all the ingredients, just not the right ones.

It neither inspires you nor makes you laugh. In fact, it requires a huge amount of patience.

One can't help but ponder that if streaming is the new normal, and you are not stuck in a theater, why not just switch sides and simply open another app.