A new trailer of Ryan Reynolds' Free Guy was recently released, and his fans could easily connect his cheeky yet confused character of Guy to his Deadpool avatar. The trailer also revealed that the film will have a theatrical release "only," and open on August 13. The sci-fi action comedy, directed by Shawn Levy, also stars Jodie Comer, and Lil Rel Howery, among others.


Reynolds is a video-game character; about to be wiped-off
Trailer


Reynolds plays the character of a bank-teller, who is living in an era where chaos, bank heists, accidents and a lot more is "normal." He goes through life with a smile, till one fine day, he gets to know that he's a background character in an open-world game, whose creator is planning to erase his whole world. The premise is funny, intriguing and action-packed.


Guy becomes 'Good Guy', a savior for the town
Details


Milly (Comer) is the one who informs him about this, and encourages him to fight his "creator." Guy becomes the invincible hero/savior Good Guy, setting an exciting duel with his creator, Antoine (Taika Waititi). The trailer is a visual treat, and will especially appeal to video-game lovers and action-movie enthusiasts. Reynolds, who's proved his mettle as the quirky/funny-hero, reprises that same image here too.


'A world that was funny, but had real stakes'
Quote 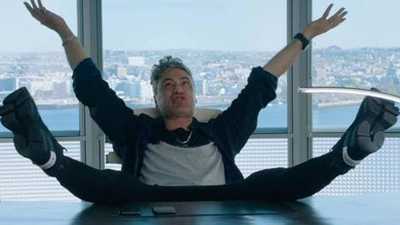 'Free Guy' was delayed multiple times because of pandemic
Information


The film was first scheduled to release in July 2020, but got delayed due to the pandemic. It then got a December 2020 date, but that also couldn't happen. Now its August premiere seems certain. Free Guy will have multiple cameos, including a posthumous one by beloved Jeopardy! host Alex Trebek. Other guests include Reynolds' good friend Hugh Jackman, Dwayne Johnson and John Krasinski.