Rains to continue unabated in Delhi-NCR over weekend, schools closed


A spell of intermittent rains for three days left many parts of Delhi-NCR severely waterlogged and caused traffic congestion while the India Meteorological Department (IMD) sounded a yellow alert for Friday. Moderate rainfall is forecast in the region over the weekend. The administration declared schools to be shut, and advised private institutions to offer work from home to their employees.


Rains could stop after Monday
Information


Gurugram received 55 mm of rain while it was measured at the maximum in Wazirabad with 60 mm, the district administration informed. The IMD said a fresh cloud is approaching Delhi which could lead to light to moderate showers at most places while sporadic intense rainfall is expected over Delhi-NCR and adjoining areas. IMD forecasts rains to stop after Monday.


All schools were closed in Gurugram, Noida-Greater Noida, Ghaziabad, and Faridabad for Classes 1 to 8 on Friday. Following the severe waterlogging on the Delhi-Gurugram expressway which forced people to wade through knee-deep water on Thursday, the Delhi Police issued an advisory to avoid certain routes. With rain forecast for western Uttar Pradesh, schools were directed to be closed in Aligarh for two days.


While Delhi remained parched most of the monsoon, the current spell is expected to cover the large deficit of rainfall, which was at 46% till Thursday morning. The Central Pollution Control Board (CPCB) said the Air Quality Index (AQI) in Delhi on Friday morning was recorded at 50 — which falls in the good category. Rains have brought down the temperature as well. 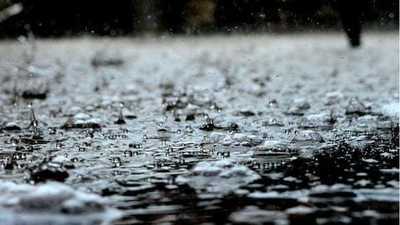 
Light to moderate showers with isolated heavy rainfall is predicted for Uttarakhand and western Uttar Pradesh till Sunday while downpours will continue in the eastern part of the state till Monday. The IMD said on Tuesday that the southwest monsoon retreated from southwestern Rajasthan and the adjoining region of Kutch. Usually, the monsoon withdraws from Delhi around a week after retreating from western Rajasthan.


A rare interaction of two weather systems over northwestern Madhya Pradesh — 250 kilometers southwest of Delhi caused the unexpected rainfall in September, as per a report by Hindustan Times. The two weather systems — a western disturbance and a low-pressure system — have put off the withdrawal of the monsoon which was earlier expected around Sunday. India experienced 7% excess rainfall this year.