Teacher beaten to death by hawkers for not buying headphones


In a tragic incident, a madrasa teacher was beaten to death on Monday after getting into an argument with hawkers over the price of a headphone. The incident took place in North Delhi's Kotwali area.

The deceased, identified as Mohammad Ovais (27), was a resident of Shamli, Uttar Pradesh, and taught at a madrasa in Greater Noida. 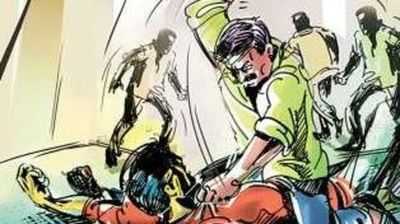 
According to The Times of India, Ovais was to board a train to Shamli from the Old Delhi Railway Station when he stopped at a shop to buy headphones at 10 pm.

He argued with the hawker, Ayub, about the headphone's price and left.

Ayub chased Ovais to force him to buy the headphones, claiming he had tried them on, the police said.


Teacher thrashed for 30 minutes after refusing to buy headphones
Aftermath


When Ovais protested, Ayub called his friends and the group started thrashing the teacher. The group of 8-10 people reportedly beat him for about half-an-hour in the midst of the busy market before Ovais fell unconscious.

The police team from Kotwali police station arrived at the spot and rushed Ovais to Aruna Asaf Ali Hospital, where he was pronounced dead.


The police said they have arrested two people, including Ayub and his aide Lallan.

"A case of culpable homicide not amounting to murder has been registered against the two men under IPC Section 304," Additional Deputy Commissioner of Police (North) Harendra Singh told HT.

However, eyewitnesses and the victim's family claim others were involved.

The police said that they are looking into CCTV footage.


Ovais's body handed to family after autopsy
Other details


Reportedly, a police officer, who wished to remain anonymous, claimed there were no external injuries on Ovais's body.

Ovais was identified with the help of his Aadhaar card and was also found to have been carrying medicines. His family said that he had fallen ill.

The officer said, "His body was sent for an autopsy and was later handed over to his family."