A three-story building collapsed in Bengaluru's Wilson Garden on Monday at around 11:40 am. According to reports, no casualties were reported as most of the occupants had either run outside before the structure fell down or were away at work. The building was reportedly built in 1962 and had been tilting for the last three years. Here are more details. 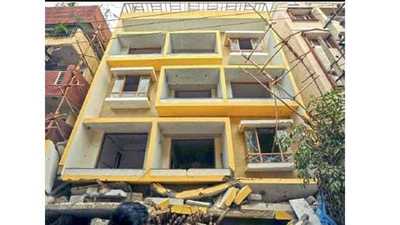 Most occupants were away at work: Report
Details


The building reportedly housed 40 laborers who work in the construction sector. Most of the occupants were at work when the building collapsed, NDTV reported. Those still inside had been alerted by their neighbors about the falling pieces of debris. The fire department rushed to the spot after the occupants reportedly called emergency services. An investigation is underway, according to The Indian Express.


Video viral after collapse was caught on camera
Video


The house was located on a side street surrounded by a few other houses. A 20-second video shows a few stray pieces of wreckage and plaster fall to the ground seconds before the collapse. One can see the road-facing walls crumbling beneath the weight of the building, breaking in half, blocking the road with a massive cloud of dirt and debris.


Area cordoned off; people around the structure evacuated
Administration


The local administration has reportedly cordoned off the entire area to monitor the building. People in and around the structure were also evacuated, The Hindu reported. The police, BBMP officials, and fire and emergency services personnel, are reportedly on the spot. The fire department was present at the time of the collapse and timely evacuation took place.